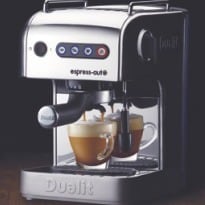 High-end breadmakers, coffee machines and mixers were a big hit this Christmas. But do people often get them just because they look good on their worktops?

There was a time when the only kitchen appliances we kept on our counter tops were kettles and microwaves. But these days most of us probably have a whole plethora of appliances on view: stand mixers, coffee makers, grinders, popcorn makers, slow cookers, toastie makers ... the list goes on.

This Christmas, foodies and wannabe kitchenistas snapped up small kitchen appliances like hotcakes. According to John Lewis we bought 46% more stand mixers and 30% more breadmakers at their stores than we did last year. Coffee machines were even more popular: we bought 51% more bean-to-cup machines and 58% more pod coffee machines this year than last Christmas. And then there's the fryers, rice cookers, and juicers which John Lewis also report as popular Christmas gifts.

Where on earth are we going to put them all? According to a recent customer survey by Currys & PC World, instead of hiding all our newly purchased kitchen kit away in a cupboard, we're increasingly making space on our work surfaces to show our appliances off. Obviously not everyone has a vast kitchen, so for some that means making a trade to prioritise the machines that matter most. Market researchers Mintel found earlier this year that 20% of us have ditched our kitchen kettles in favour of coffee machines. So how do you decide what to leave out in your kitchen? There seem to be three deciding factors for moving appliances from the cupboard to the counter.

The most obvious reason to keep an object on your worktop is because you use it so frequently it's more hassle to tidy it away. You don't put your kettle away in the cupboard if you're a regular tea drinker, or your coffee machine if you're a caffeine addict. If you're a prolific baker you'll want to keep your mixer out, ready for action when you are: kitchens are increasingly becoming showrooms that reflect our interests and hobbies. Currys & PC World found that 60% of shoppers splash out on premium-branded kitchen products over basic kitchen tech. Small electricals buyer for John Lewis, William Jones has observed this trend. "What was once a habitual pastime has become a true hobby." Taking coffee as the example he continues: "Consumers are choosing to grind their own beans and mix their own blends at home."

Kitchen kit is no longer purely utilitarian. For some, appliances have become to kitchens, what changing the colour of your cushion covers was to living room sofas. They have to look good and be in the right colour to match your decor if you're going to leave them out on the counter. KitchenAid is the obvious candidate for bringing colour into the kitchen, but they're not alone. The demand for stylish gadgets that look smart in the kitchen have prompted companies such as Dualit, for example, to collaborate with luxury paint and wallpaper company Little Greene, to create six special-edition Heritage toasters, and De'Longhi has made its bean-to-cup coffee machines available in nine different colours. "The products look great, so people want them out. They're like pieces of art on their kitchen counter," says Jones.

They make you look good

John Lewis has found people investing in two coffee machines: one pod-to-cup that's quick in the week, and then a full blown machine, built with a commercial standard of technology, for the weekends. The catch to the kitchen-appliance-as-status-symbol idea is that you have to be able to do more than just use the equipment to earn your bragging rights. By having a powerful piece of kitchen kit on your counter this year you'll be implying that you're an expert yourself. Maybe you are. But if you're more wannabe than actual expert the retailers are prepared for you too. Sage, for example, will send an engineer with its high-end Dual Boiler coffee machine to your home to help you set it up and show you how to work it. It seems that fortunately, there's no need to lose face as well as kitchen work surface.

How many appliances do you have on your kitchen counter, and are they there for their form or their function? Be honest ...

Photo: A Dualit coffee machine ... a sign of ostentatious wealth?