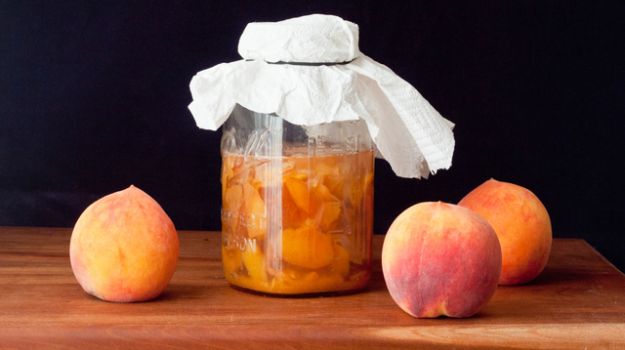 High-end vinegar is going through something of a renaissance among foodies, chefs and home cooks. Vinegar is alive. Literally. At least before it's pasteurized -- a step taken by most manufacturers to make vinegar shelf stable. I'm on a quest to make my own vinegar, the kind that must be consumed quickly while at its peak acidity level, or fed at regular intervals to keep it alive. This living vinegar is tastier, healthier -- and can give you better bragging rights -- than the expensive pasteurized product you're likely to find in gourmet food stores.

I dove into the world of DIY vinegar at the home of America's greatest promoter of maker lifestyle: Thomas Jefferson. The Monticello Heritage Harvest festival is an annual celebration of food, history and the do-it-yourself spirit of the American Revolution, where authors and PhDs rub shoulders with urban homesteaders -- a gathering that my husband calls "Historians 'n' Hippies." My guides in the art of vinegar production come from both ends of this spectrum: Sandor Katz, author of "The Art of Fermentation," and Gabriele Rausse, a pioneer of modern Virginian wine making and director of Gardens and Grounds at Monticello.

Vinegar appears in the human record at the dawn of civilization. Vinegar residue has been found in Egyptian urns from 3000 BC. Vinegar is mentioned as a tasty treat in the Bible and as medicinal treatment for colds in the works of Hippocrates. Apple cider vinegar was a cure-all in colonial America, but by the time of the American Revolution, people such as Thomas Jefferson explored vinegar as the ultimate addition to fine dining. Jefferson's years in Paris made him a connoisseur of vinegar -- and culinary historian Damon Lee Fowler declared Jefferson was positively "addicted" to tarragon vinegar.

There are extremely elaborate, highly measured ways to accomplish the transformation of fruit juice or wine into fine vinegar. But Sandor Katz takes a loose, DIY approach to the process. Acetic-acid-producing bacteria called acetobacter and yeast -- the two microorganisms required for vinegar making -- are all around us. "You don't have to be a microbiologist," said Katz, when I expressed my concerns about making fruit scrap vinegar. "Not to worry: vinegar makes itself." My process began with fruit scraps. While making a pie, I found myself with a pile of peach skins and several less-than-perfect chunks of fruit. I would begin with this, starting the process of turning fruit sugar into alcohol.

Step one: Sugar to alcohol

Vinegar requires two steps to turn fruit scraps into vinegar. First, yeast naturally found on fruit turns sugars in the fruit into alcohol -- a process called alcoholic fermentation. And second, acetobacter converts the alcohol into acetic acid. A home brewer or winemaker will use specific types of fruit sugar and add a specific type of yeast to the mixture. For my purposes, I just mixed the fruit scraps with a sugar solution in a Mason jar following Katz's recipe in his first book, "Wild Fermentation." Then I covered the top with a paper towel secured with a rubber band and let the natural yeasts on the fruit (and in my kitchen) find their way to it. Yeast consumed the sugar, excreting carbon dioxide bubbles and ethanol in the process. I gently swirled the mixture around in the jar every once in a while and within a week, I could see the telltale bubbles that showed alcohol was being created.

My goal was not low-alcohol peach hooch. There's a second step: turning alcohol into an acetic acid mixture that tastes delicious. "The word we use is French," Katz said. "Vin aigre just means ‘sour wine.' It is the consolation prize when alcohol goes bad." I strained out the chunks of peach skin to stop the alcohol-creation process, then put the golden liquid into a new container with a scrap of thin kitchen towel over the top of the jar. Katz's approach to this step is extremely simple: just let it sit there. The peach alcohol soon began to get stringy gelatinous threads that eventually massed into a noticeable translucent layer on top of my peach mixture. At first glance, it seemed like a food-safety disaster, but it's actually the start of the vinegar magic.

This was the beginning of the "vinegar mother," a gelatinous membrane made mostly of cellulose produced by the acetobacter. It is the "starter" from which more vinegar can be created. After two weeks, a quick whiff at the top of the jar revealed the powerful tang of transformation.

I poured some of the vinegar into a shot glass. It tasted sharp, with a hint of sweetness -- a distinct peach taste to the delicious acidic liquid. I plan to let this sit for a couple of more weeks, until it reaches its peak of acidity. I have a dozen plans for this: salad dressing, marinade, potato salad, even mayonnaise.

Making fruit scrap vinegar was an interesting experiment, but this kind of live vinegar needs to be used fairly quickly, while at its maximum acidity level, or heat-pasteurized and stored in a closed narrow-necked bottle for long-term storage. I wasn't interested in the details of heating and storing this kind of vinegar safely. And it is crucial to pay attention to these details because as the acidity level in vinegar drops, other microorganisms can start to take over -- a potentially dangerous situation from a food-safety standpoint. I wanted to find an easy sustainable way to keep vinegar alive in my own kitchen, so I turned to a classic Italian method for making wine vinegar.

An alternate step: Acquire a mother

The traditional method of making vinegar with wine begins with acquiring a "mother of vinegar" from a vinegar-making friend or from a wine-making supply store. I was generously given a small jar of this vinegar mother by Rausse. A passionate winemaker and vinegar maker, Rausse makes vinegar in his home every day using a "mother" that came from his grandmother's house in Italy. When I asked him how long he had had his vinegar mother, he told me, "Since I was born."

I was honored. My vinegar mother had its birth on another continent three generations ago. But such a legacy requires dedication and focus. I learned about the care and feeding of vinegar mothers at Rausse's vinegar-making demonstration at Monticello's Heritage Harvest Festival.

The key to good vinegar, according to both Katz and Rausse, is to consume it while it is still alive. Most vinegar that you buy in the grocery store or gourmet shop has been pasteurized -- the living organisms killed for the sake of shelf-stability and food safety. There is an important place for pasteurized vinegar, most notably in food preservation.

Up until now, I've bought commercially produced vinegar with live bacterial cultures (Bragg's makes a good one from apple cider). In a few months, I hope I'll be reaching for vinegar with a living history instead. My homemade vinegar will tell the story of at least three generations of Italian vinegar makers, with additional flavors from my own kitchen. Over time, I'm sure my homemade vinegar will transform into something unrecognizable to Gabriele Rausse and his grandmother, but I hope it will be a delicious heirloom that I'll be able to pass on to friends and family over the years and eventually to my own grandchildren. Time will tell.