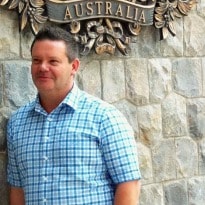 I had to rush out of my kitchen and leave the oven unattended for this one! Gary Mehigan was in Delhi and I had a one-on-one with him about Indian food, what's it like being in India, being recognized on the streets and his new book.

Gary, who's here as part of Australia's cultural festival Oz Fest, said "I'm so excited to be returning to India for my third trip, the sights, sounds and tastes of India have stayed with me since my first trip to the saffron land last year."


"OMG, is that the guy from MasterChef?"

Has he been recognized and stopped on Indian streets yet? "Well, the Delhi tour wasn't really announced, so people weren't expecting me to be here. But yes, people walking by have stopped and those in rishshaws have called out and said 'Hey, Gary!' I wasn't expecting that and it's a little weird being recognized", says Gary modestly.

As a special guest at 'A Great Southern BBQ' at the Australian High Commission, Gary conducted a cooking demonstration and was joined by Ritu Dalmia to judge a few cooking competitions for the kids.

Making the most of his trip, he paid a visit to the crowded Spice Market at Khari Baoli and bought heaps of spices, more than he actually needed.

"The spice market was beautiful. I have never seen so many people at one place before! We bought walnuts, dried apricots, dried dates, pine-nuts and different types of pepper. He added, "I've never seen pine-nuts in shells, the long seed ones!"

I'll have 10kg of the fennel seed please, do ya think I could get that through customs with a smile...:-) pic.twitter.com/yEHGG0CB8D

Ask him about Indian food, and he's quick to retort, "I have been so inspired by Indian cuisine and eager to learn more, but also to share my passion for Australia and the amazing food we have to offer.

I am secretly in love with Indian breads, parantha, dosa, naan, the list goes on!" These days, he's more inclined towards South Indian fare. "I love the use of rice in South Indian dishes, love the appams, idli and curry leaves."

Gary, who knows his Indian spices and curries, quips "thanks to my frequent visits to India and all the knowledge I gain here, the Indian contestants will be in trouble now. I can point out and tell them that's not how it's done. Oh, how do I know? I was in India last month, that's how."

Gary feels that in Australia, other than a few restaurants, Indian food still isn't represented as it should be.

"A lot of people associate Indian food as being a cheap and oily take-away option."

So is he open to an opportunity to team up with an Indian chef in Australia to make things better? "Sure, if time permits, I would love to. Just give me a call."

At the cooking demonstration in Delhi
Advice to young chefs

One of the things Gary advices young people is to focus on the basics. "Not to discourage their creativity, but they have to learn the basics first and worry about creative part later."

In his new book, Gary has put down 100 of his favourite dishes. Spanning several countries, these dishes are, as he says, "just what I like to eat, not necessarily what I'm good at making." Among the Indian dishes, Paneer Butter Masala just might make it to the book.

All of Gary's travels, including his adventures in India, will be filmed for his new television series pilot - Far Flung with Gary Mehigan. He adds, "Far Flung is the working title, let's see how it goes."

Different strokes - talking about Indian food and more
On his daughter

"She doesn't like to cook much; I think she only cooks sometimes to spend time with me. I guess she'll be a geologist or something when she grows up", he says with a cheery smile. Amongst her favourites are roast chicken, simple egg & lemon soup and chicken meatballs.

Missed meeting Gary? You can meet him here

In Chennai, Gary will go head to head with the Executive Sous Chef of the Hyatt Regency, Chef Gopi, in a BBQ lamb duel.

Listen to the latest songs, only on JioSaavn.com
He'll be visiting the fish market and cooking there. "We're trying to get hold of a little stove, some pans and I'm looking forward to making a curry there. It'll be my version of curry, I'll be using turmeric, yogurt, cardamom, cinnamon, and I love the idea of crispy lotus seeds on top."

A motorcycle fan, Gary will be visiting the Royal Enfield factory and hitting the road with a few members of the Enfield Club. "Depending on how confident I feel, I'll be taking a spin around the city, though a lot of people have asked me not to, they told me it's dangerous."

CommentsIn Mumbai, Gary will be signing books for fans at Crossword Bookstore at In-Orbit Mall, Malad between 6 to 7 pm on 25 October. He will also join Indian celebrity chef Vicky Ratnani on his new show 'Party Kitchen' on NDTV Good Times to dish out some party recipes.