How to Cook the Perfect Cherry Clafoutis 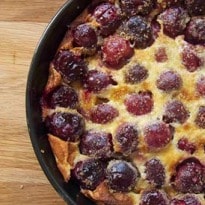 Is this wobbly French dessert a fine use of the last of the season's cherries, or do you have a better recipe? Are sweet or tart cherries best in a clafoutis - and do you remove the stones?

I've been gorging myself silly on cherries for the past couple of months, cramming them in as if they're going out of fashion, as indeed they are - come September, our precious homegrown fruit will disappear for another year, to be replaced by ruinously expensive imports. An excellent excuse to eat as many as you can while you can afford it and, should you ever tire of them fresh, this fruity French dessert is just the thing to awaken your cerise-sodden palate one final time.

A particular speciality of the Limousin region, where it's traditionally made with the local griottes, or sour morello cherries, the clafoutis is now found on menus throughout the country in season, and it's easy to see why: the combination of sharply juicy fruit and sweet, wobbly batter is a beguiling one. Interestingly, the name is said to come from the Occitan dialect word claufir, to cover or fill - which this dessert does, very satisfyingly indeed.

Small, tart griottes are not easy to come by in this country, so luckily I don't find many recipes calling for them. Although they're still a popular choice in its home region, the sweeter charms of the dessert cherry has clearly won on the international stage. Good news for anyone hoping to use local fruit.

As I've yet to come across a cherry pitter for sale, I'm also relieved to find relatively few recipes calling for me to remove the stones: Raymond Blanc, Julia Child and Michel Roux Jr suggest it, but everyone else seems content to let the diners do the hard work themselves. This seems pretty equitable to me, but I have to concede it's more pleasant to eat a pudding without worrying about cracking a tooth.

It seems the traditional method is not totally illogical, however: as Larousse notes, the pits have a particular aroma which infuses the batter as they warm up in the oven, so removing them robs the dessert of its full cherry flavour. Although I'm sceptical, it's true that the whole fruit has a more intense flavour than the halved kind - so, if practical (ie unless you're serving it to small children, or those with dental problems), leave them in, issuing a suitable warning at the table.

Blanc macerates the fruit in kirsch (morello cherry brandy) and sugar for two hours before cooking, on the basis that "the sugar will slowly permeate the cherries and intensify their flavour". Kirsch, an ingredient also used by Roux Jr, proves quite ridiculously expensive, but fortunately a little goes a long way - and, though it's a shame he has to stone his cherries, they do indeed taste better than Roux or Child's versions.

This presents me with a problem: I'd like to use the fruit whole, but this will make it hard for the sugar and brandy to penetrate the flesh. I decide to lightly crush the cherries before macerating, so they keep their shape during cooking, while still getting the full benefit of their alcoholic bath.

The cherries are baked in a flan-like mixture, made from eggs, flour, sugar and milk. Larousse demands a "fairly thick" batter, which fits the bill for recipes from Jeanne Strang's classic volume on south-western cooking, Goose Fat and Garlic, and a wonderful book put out in 1984 by the Maîtres Cuisiniers de France, called Cuisine du Terroir: The Lost Domain of French Cooking, which I happened upon in a charity shop last spring. The latter leans particularly heavy on the flour, using 200g to Blanc's heaped tablespoon, to make a firm batter which reminds me of a very fancy Yorkshire pudding.

The Master Chefs also scald their milk before use in the batter, while Blanc uses a mixture of milk and whipping cream. I'm not sure either amendment is necessary, however - Blanc's clafoutis is delicious, but quite ridiculously rich, while I'm left none the wiser as to what hot milk brings to the party. If anyone can enlighten me, I'd be grateful.

Having tried a whole range of different textures, the lighter, wobblier, dairy-heavy versions from Blanc and Caroline Conran's award-winning Sud de France seem most attractive for a summer dessert. After complaints that Blanc's clafoutis tastes "a bit eggy", however, I'm going to err more to towards Conran's slightly heavier hand with the flour - the base is still soft and custardy enough to make this a luxurious, but surprisingly light, dish.

Most recipes also incorporate some butter: Conran uses olive oil (presumably local) instead, while Strang and Bourdain reject the idea altogether, which I think is a shame: used in moderation, it adds a pleasing silky richness to the batter. Blanc browns his butter first to make a beurre noisette, but I'm disappointed to find I can't taste this in the finished dish so I don't think it's worth the extra effort.

Only Conran and Roux Jr use any raising agent - baking powder in both cases - and I think with so little flour involved, there's not much point: a really silky custard is light enough on its own.

That said, Roux Jr's recipe, from his book A Life in the Kitchen, doesn't really involve a custard at all: it's more of a fluffy, almondy sponge with cherries on top. Absolutely delicious, certainly, but not strictly a clafoutis. It's not, I suspect, a recipe he has run past his south-western wife.

Roux Jr beats together butter and sugar, before folding in eggs, flour and ground almonds much in the manner of any other cake, but everyone else stirs together wet and dry ingredients to make a thinnish, pourable batter.

Child, puzzlingly, calls for me to stick all the ingredients in a liquidiser and whiz them together. She also bakes the base of the clafoutis before arranging the cherries on top and pouring over the rest of the batter around them. This, presumably, is so they don't sink to the bottom, although I find they seem to float quite obligingly in every version. I'm not sure what difference the blender makes, apart from creating more washing-up.

I'm happy to let the cherries do the talking here, but, that said, I do think Roux Jr's almond essence works brilliantly with the fruit - much better than the boring vanilla everyone else sticks in. I also like his lemon zest, but I think ground almonds are a step too far: fine in a sponge, here they just weigh down my lovely smooth custard.

Roux greases and flours his dish, presumably to make it easier for the mixture to climb up it, but I prefer Blanc's sugary method, which gives it a nice crisp edge.

Child dusts her finished clafoutis with icing sugar, which looks pretty, but a sprinkle of demerara adds a more interesting texture, providing a crunchy counterpoint to all that wobbly custard and juicy fruit (not forgetting the dangerous stones) - and it will work just as well as caster for lining the baking dish, too.

Best served up warm, rather than hot, this also goes well with a soupçon of cold cream and, of course, a dish for the discreet disposal of all those pits.

Wash the cherries and remove the stalks. Put in a bowl and lightly crush, so the skins pop but the fruit retains its shape. Add 2 tbsp caster sugar and the kirsch, toss together, cover and leave to macerate for two hours.

Preheat the oven to 180C/gas mark 6. Grease a baking dish just wide enough to hold the cherries in one layer, and add half the demerara sugar. Spin the dish round to coat the inside with demerara, then set aside.

Sift the flour into a mixing bowl and add a pinch of salt and the remaining caster sugar. Whisk in the eggs, followed by the milk and melted butter, until you have a smooth batter. Stir in the almond essence, if using, and the lemon zest, then tip in the cherries and their juices.

Pour into the prepared baking dish and bake for about half an hour, until just set but still a bit wobbly. Sprinkle with the remaining demerara sugar and serve warm, rather than hot.

Is a clafoutis a fine use for the last of the season's cherries, or do you have another favourite cherry recipe you'd like to share? And has anyone had experience of cooking clafoutis with griottes, or morellos: are they really the superior choice?

The perfect cherry clafoutis. Photographs: Felicity Cloake for the Guardian