How to Cook the Perfect Coq Au Riesling 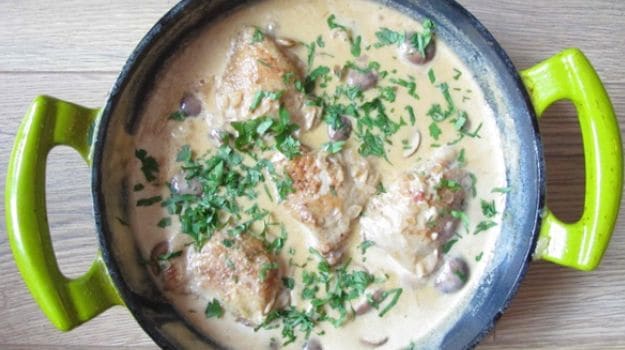 Is coq au riesling a fresher alternative to coq au vin or its poor northern relation? Would you add black pudding, grapes or even dill – and where can you find good-value riesling?

Having just, and very satisfyingly, re-shelved my cookery books, I was puzzled to discover that not a single volume in the French section contained a recipe for coq au riesling. Not one. Even Larousse Gastronomique, that bible of Gallic gastronomy, proved mysteriously silent on the subject.

Its extensive entry on coq au vin solved the mystery, however. Although the red wine version is far better known in this country, in regions such as Alsace, it would of course have traditionally been prepared with the more plentiful local white. This is a matter so obvious to les editeurs at Larousse that they do not feel the need to pass comment on the fact that one of their recipes demands red wine and one white.

Thus enlightened, I return to the shelves to discover that, among the plethora of recipes for coq au vin, a handful concede they can also be made with riesling “along the same lines” – somewhat surprisingly, given that rich, dark coq au vin and tangy, creamy coq au riesling seem two very different spins on the same basic ingredients to me. So is it possible to simply substitute white for red in the quest for perfection?

Classic coq au vin recipes all call for the whole bird (though even Larousse admits it is not easy to find the traditional mature variety these days), while Diana Henry uses legs in her new collection devoted to the chicken, A Bird in the Hand, Nigella Lawson uses thighs and Nigel Slater simply calls for “joints, on the bone” in Real Food (this last recipe, incidentally, has, until now, been my absolute favourite). I assume he means with the skin on, as Henry specifies – although chicken thighs tend to have an excellent flavour, I find Lawson’s boneless, skinless chunks rather dull in comparison to the whole pieces, which fall temptingly from the bone after an hour and a half on the hob. (The chunks do, of course, cook rather more quickly, which may be her reasoning.)

Using the whole bird also allows you to make your own stock from the carcass for the sauce, of which more later. Browning the pieces before braising, as most recipes call for, gives the sauce an extra punch of savoury flavour, even if that golden skin emerges from its subsequent slow cooking sadly softened.

Michel Roux marinades the chicken in wine and aromatics for 12 hours. If you have time, this gives it a deep, vinous flavour that works particularly well with the creamier, sweeter white wine sauce.

Roux, Slater and Lawson all use bacon too, which goes very well with chicken and cream. Roux also calls for black pudding, to “lend a similar flavour” to the sauce as the more traditional blood. I suspect that this may be more relevant to a red-wine coq au vin than this variety, but I love black pudding, and I’m tickled by the idea of sneaking some Irish blood into Roux’s very French recipe, so I try it. Crumbled in at the end, it gives the sauce a deliciously rich, sweet earthiness, but overpowers the tangy flavour of the wine. (My mum, however, is a big fan, and wants me to put it on record that she prefers Roux’s recipe to my own. I think it’s an Irish thing.)

Slater, Roux and Henry put onions in their sauce, Larousse adds shallots and, like Slater and Roux, garlic, and Lawson sticks to garlic-infused oil, though she, along with Larousse and Henry, does use leeks. Roux also calls for “baby salad onions” athough, in retrospect, after trimming 20 of them, I begin to suspect he really means baby onions of the sort sold for pickling. In any case, I think the leeks go so well with the other flavours in the sauce that I’m going to use them alone, finely chopped a la Lawson, but cooked separately, as Roux suggests, so they don’t end up mushy. Onion and garlic will play supporting roles, infusing the sauce with flavour, but not appearing in the finished dish.

I prefer the mushrooms Roux, Slater and Lawson put in to Larousse’s carrots, which look wrong, and preferably the chestnut ones Slater suggests rather than Lawson’s slightly slimy oyster variety. Henry finishes her sauce, somewhat surprisingly, with green grapes. My book group, whom I test some of the recipes on, is initially sceptical, but quickly converted – their sweetness is a lovely contrast to the savoury cream. However, as I’m already using mushrooms, I’m not going to add grapes too. That would be too weird.

Wine, of course, is the backbone of this sauce: Henry and Roux call for a dry riesling, Slater a medium-dry white wine, and Lawson and Larousse are non-specific. It is remarkably difficult to find a keenly priced, medium-dry riesling these days, but I’m rewarded for my pains eventually. There is no need to add sloe brandy, as Larousse suggests, to round out the sauce, because the acidity is already balanced by the natural sweetness of the wine. If you can’t find any, however (and you can use a decent hock or a similar medium white instead), then a dry riesling, sauvignon blanc or unoaked chardonnay will also work; the difference is fairly subtle (I’d rather invest in a good riesling to drink with it).

Henry, Roux and Larousse add chicken stock to the sauce, with the last sensibly suggesting making this from the chicken carcass. This is an excellent idea, though you will need to reduce it well for maximum flavour – make it while the joints are marinating, so it is ready to use the next day.

Lawson’s sauce, which contains neither cream nor flour as thickener, is disappointingly thin; the armchair cooks of the book club reckon it could do with “a bit of reducing”, while complaining that Henry’s could do with a bit more sauce. I think the problem is that, like Slater, she has used double cream, and that can be too much of a good thing. Substituting the single variety, enriched with an egg yolk, as Larousse suggests, adds body without too much weight, while a little flour helps it cling to the meat.

This is not a herb-rich dish, but I like the flavour of Henry and Larousse’s thyme, and Henry and Lawson’s bay (though the latter’s dill seems a bizarre choice). Larousse also adds a grating of nutmeg, but I can’t detect it in the finished dish. The latter’s lemon juice also seems unnecessary with single cream, although it is welcome with the sweeter, richer double variety. And, if you really want to knock them out, feel free to add a slug of brandy – after all, if Michel Roux and Larousse Gastronomique do it, it must be authentic.

½ head of garlic, cut in half laterally

2 sprigs of flat-leaf parsley, plus extra to garnish

1 onion, peeled and cut in half

Put the chicken in a bowl with the garlic, one leaf/sprig of each of the herbs and a scant teaspoon of coarse salt. Pour in the wine and leave to marinade for 12 hours.

Meanwhile, put the carcass in a deep pan with the rest of the herbs, the carrot and onion. Half-cover with cold water and bring to the boil, then turn down the heat, skim and cook very gently for an hour and a half. Strain, discarding the bones and aromatics (after picking any meat off), and reduce the stock to about 300ml.

The next day, remove the chicken from the wine and pat dry, then set aside. Melt a quarter of the butter in a large casserole pan over a medium-high heat and fry the lardons until golden. Scoop out with a slotted spoon, add another quarter of the butter and fry the leeks with a pinch of salt until soft. Scoop out with a slotted spoon and add to the bacon. Repeat with the mushrooms.

Whisk together the cream and egg yolk, then take the pan off the heat and whisk this into the sauce. Put it back on a gentle heat and bring slowly to a simmer, then cook until it lightly coats the back of a spoon, stirring regularly. Season to taste, then stir in the lardons, leeks, mushrooms and chicken.

Coq au riesling: a lighter, fresher, tangier alternative to the classic red-wine variety, or its poor northern relation? What do you serve it with (baguette? buttered noodles?) and can anyone recommend a source of decent, good-value riesling?