How to Eat: Biscuits 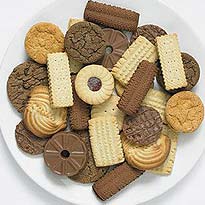 What is the point of fig rolls? Is a Club really a biscuit? To dunk or not to dunk? How to Eat puts the kettle on, sits down and has a biscuit (or three)

Biscuits. Tea and biscuits. It is arguably Britain's most significant food and drink ritual, and so it is only right that How to Eat addresses it. Put the kettle on, settle down and prepare for the kind of dust-up not seen since Garibaldi took on the Bourbons.

The Jaffa is a cake, that's settled in law. So let's leave that. Instead, I'd like to talk about Britain's shared, intuitive understanding of what a biscuit is and isn't. It is an understanding which transcends technical definitions (cakes go hard when stale, biscuits soft), and what you will find stacked, erroneously, in the supermarket biscuit aisle.

A biscuit is some form of baked flour, sugar, fat and water, potentially covered in one layer of chocolate or sandwiching a jam or cream filling, but I'm sure we can all agree that it is not:

• Fig rolls. Remember when you were about eight, and you were round a friend's house, and his or her mum asked if you wanted a biscuit, and she gave you a fig roll and, internally, you went: "What the bleedin' 'ell is that?" That still stands.

• Anything individually wrapped and entirely covered in chocolate, eg Penguins, Clubs, Wagon Wheels, Viscount. They aren't biscuits, they're biscuit bars or even chocolate. Or not chocolate exactly, but certainly chocolate-led. Ask yourself this, has anyone ever said: "Mmm, this Club is lovely, but what would make it even better is if they just put a little less chocolate on it?" Of course they haven't. In this case, the biscuit is merely a vehicle for the delivery of chocolate, which you nibble off, before begrudgingly eating the biscuit. Next you'll be claiming that Twix, Kit Kats, Time Outs and Tunnock's caramel wafers are biscuits. Which they're not. Did your "biscuit box" contain all of the above when you were growing up? You know what you were? Spoiled.

• Oatcakes. Talking of Little Lord Fauntleroys, David Cameron told Mumsnet that his favourite "biscuit" was an oatcake with butter and cheese. That's not a biscuit, Dave, that's the cheese course.

• Cookies. Big, brash US interlopers. They're oversweet, over here and utterly dysfunctional. Why do I want random nuggets of chocolate when I could have one efficient layer, evenly spread across the whole biscuit?

• Rich Tea. Why do that to yourself, unless you actually live in a monastery? Rich Tea are solely eaten by people who are either a) scared of flavour, or b) in a painful phase of delusional, dieting self-denial. They are notoriously rubbish dunkers, too.

• Bourbons. Cocoa and dark chocolate? That's what they're supposed to taste of? Seriously? Because all I'm getting is an artificial tang of something indistinguishably dark and a bit cheap.

• Jam rings. Theoretically, this should work, but most high street versions are hard work: two brittle pieces of dried-out biscuit encasing a nugget of jam so chewy it threatens to have your fillings out.

• Hobnobs. Prima facie evidence of how capitalism perpetuates itself by creating artificial demand for unnecessary products. In the 80s, was anyone crying out for a flapjack-digestive hybrid so sweet it literally glistens with sugars? No. Yet this OTT, bastardised biscuit now has the nation in its grip. The Hobnob is, of course, famed for its dunkability, for its ability to take on moisture and retain its integrity, but bite in and you will find that dunking turns those oats into an unedifying, gritty slurry.

• Shortbread. Only the most patriotic Scots pretend to like shortbread. It's like Runrig. And Rab C Nesbitt. Too rich and buttery, and yet somehow dry, one-dimensional and, bar that sugary coating, a bit parsimonious, they are unpleasantly contradictory, and so claggy it's difficult to eat one (never mind three; see below) without finishing your cup of tea. No biscuit should require that level of lubrication.

• Iced rings: Is this a five-year-old's birthday party? No? Then what are they doing here?

Sting has tantric sex, I have biscuits: a sublime pleasure that should be drawn out for as long as is humanly possible. In essence, there are two mains methods specific to dunking biscuits (ginger snaps, digestives, malted milk etc), and non-dunking sandwich biscuits, such as the custard cream and Oreo.

For dunkers, it's a three-step process: 1) dunk half the biscuit, suck/eat that dunked section; 2) dunk half of the remaining piece (a quarter of the original biscuit), and eat that; 3) dunk final triangle of biscuit, whilst pinching one corner. If the biscuit is chocolate covered, you dunk but then lick off the chocolate at each stage before eating the biscuit underneath. It is a process fraught with danger, in that you may apply too much pressure with your tongue and/or overdunk, but persevere and, in time, you will achieve a level of biscuit Zen where, just by looking at it, you can gauge what stress or how much liquid a biscuit can take.

For sandwich biscuits, you must carefully prise off one layer of biscuit with your front teeth (do not use a knife!), and then lick the fondant clean off, until the final layer of biscuit is - oh, gastronomic joy! - nicely softened with your own spit. Heaven.

There are people who consider dunking declassé, rude even. Pity them and their joyless, frigid lives. For only in dunking (obligatory Peter Kay link here) do Britain's two greatest biscuits, the ginger snap and the milk chocolate digestive, achieve perfection. After dunking, the ginger biscuit becomes a multilayered sensory adventure, its now soft outer pulp encasing a still hard core that has achieved an almost toffee-like texture and a new sharper, gingery intensity. The chocolate digestive, meanwhile, turns from dry, rudimentary snack, into a sweet, yielding embrace of molten chocolate and manly, reassuring wholemeal huskiness. Dunked, it is possibly the ultimate British comfort food.

Optimum number of biscuits at each sitting

Three. The first is a pure hit of pleasure, which the second extends. By the third, however, that arc has begun to plateau. A fourth biscuit will leave you feeling a little sick, guilty, somehow soiled.

Essential, and critical (as you're dunking) that it's served in a wide-mouthed mug, and preferably (as you're eating three biscuits) a pint mug at that. Beyond a whistle-whetting first slurp, do not actually drink any of the tea until you've finished dunking, as that will dilute the biscuit flavour. After three biscuits, though, you will need a full pint to clear your palate and quench your thirst.

Note: if you do suffer a dunking mishap and drop a piece of biscuit in your tea, stop immediately, park your biscuits and put the kettle on again. Otherwise that "session" will be ruined, right down to the last disgusting, bitty mouthful. People say that you can fish the piece of rogue biscuit out, but by the time you've found a teaspoon, it will already be disintegrating and (particularly if you don't take sugar in your tea) your brew will be ruined. Accept it and start over.

In my house, you don't have to take your shoes off, you can smoke a pipe, leave the loo seat up, I don't care. But if you walk around eating a biscuit without a plate, then we will have words. You are clearly failing to catch the crumbs in your hand, and it looks far too precarious balanced on the rim of your mug. I have plenty of plates: use one, you barbarian.

So, biscuits, how do you eat yours?