How to Make Perfect Mashed Potato 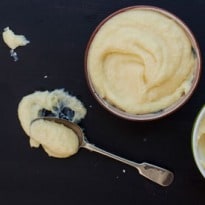 Two weeks after Dabbous opened in January 2012, it received a rare five-star review from Fay Maschler in the Evening Standard. More rave reviews followed, and suddenly the restaurant had the longest waiting list in London.

One thing Ollie Dabbous didn't want to do was let the hype affect his food, which is clever without being tricksy, and often quite restrained. It's all very well impressing people with exotic combinations, he says, "but it's even more powerful if you can deliver something they've had 100 times before and they think, wow, I didn't know it could taste that good."

Enter the Dabbous mashed potato, which appears as a standalone dish. In general, he says, the food at the restaurant is "very light, very clean, probably quite feminine". This dish is the opposite of all those things: sinfully rich, full of butter, served with unctuous roasting juices on top. "A lot of dishes here are pretty," he says. "The mash is deliberately quite ugly. It's not attention-seeking. It's no frills."

We use a French new potato called Ratte, which has a buttery texture, but you could also use Desiree or Maris Piper. Wash the potatoes but don't peel them yet. Place them in a pan with cold water and 40g salt and bring to boil then simmer gently for 1 hour until completely cooked but not falling apart. Drain the potatoes and then peel them with a paring knife as quickly as possible.

Push, but not too hard

Bring half the milk and half the butter to the boil in a wide pan, then remove from the heat. Sit a mouli or a potato ricer on top of the pan and pass the potatoes through into the hot liquid. The key is not to push them too hard - you don't want to stretch the gluten. Adding little cubes of butter to the potatoes will help them go through much more easily.

Sieve, but keep it quick

Pass the mash through a sieve, twice. At the restaurant we use a fine drum sieve, which allows you to put all your body weight behind it, but you could use a normal sieve at home. You want to do this as quickly as possible so you can serve the mash while it's still hot.