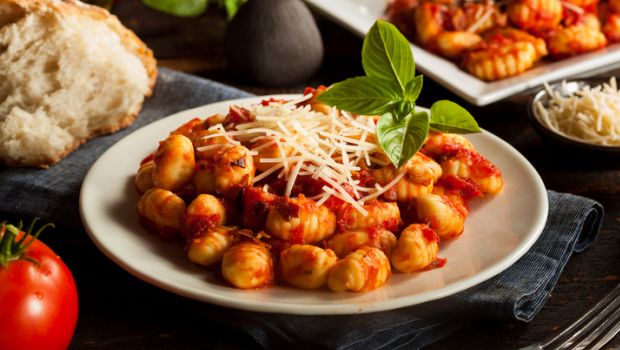 Highlights
I've long thought more people needed to know about Roman-style gnocchi. The dish is quite different from the lightly boiled potato dumplings that most of us think of when we consider gnocchi. As much as I love the typical iteration, the Roman version - squares of semolina (or sometimes polenta) layered in a casserole dish, topped with butter and cheese and baked - is much easier to pull together at the end of a busy workday.

You don't eat them the same way, either: You pop the dumplings (heavenly if they're made right) into your mouth whole, or at least I do, and they're usually enrobed in a light sauce and could be combined with any number of other ingredients in a composed dish. The Roman gnocchi, on the other hand, is often shaped into pieces bigger than bite-size, so you use a fork, and it's usually served quite simply, with little more than a tomato sauce on the side, often as a starter.

I was reminded how much I appreciate the dish when I flipped through Antonio Carluccio's charming new book, "Vegetables" (Quadrille, 2016). Carluccio, 79, is an acclaimed Italian cook, writer and TV personality who lives in London, where he ran the Neal Street Restaurant and developed the Carluccio's cafe chain whose branches now number 97. (He also has two restaurants in the United States, both of them in the Washington, D.C., area.)

What I love most about Carluccio's book is the way he pays tribute to Italian traditions (such as the classic summer panzanella salad) while showing flashes of innovation (a lasagna made with thinly sliced beet rather than noodles). The latter is what he applies to Roman-style gnocchi, making it with chickpea flour as a smart nod to the fritters called panelle that are a classic Sicilian street food.The dish has just a handful of ingredients - including eggs, nutmeg, butter and Parmigiano-Reggiano - which add up to something wonderfully flexible that also happens to be gluten-free. I enjoyed several squares of it one night fresh from the oven and topped with a little tomato sauce, and the next night I warmed a few more and spooned on saucy black beans and crumbled a little feta over them.

It probably wasn't all that Italian the second time, but who cares?

This twist on Roman-style baked gnocchi, traditionally made with polenta or semolina, uses chickpea flour.

Serve two pieces as an appetizer with tomato sauce, or serve 3 to 4 pieces as a main course, with sauce and a salad, or perhaps as a base for saucy beans, mushrooms or stews.
It helps to have a marble slab or other work surface that's cool to the touch for spreading the chickpea mixture, but it's not a requirement.

MAKE AHEAD: The gnocchi dough can be cooled, cut into squares and refrigerated, covered in plastic, for up to 3 days before baking.

Chickpea flour can be found in the gluten-free or grains section of many supermarkets, and as gram flour in Indian grocers.

Combine the water, oil, salt and pepper in a large saucepan over medium-high heat; bring to a boil.

Gradually add the chickpea flour, whisking constantly, until evenly incorporated. Reduce the heat to medium and cook for 10 minutes; the mixture should be somewhat smooth, but you may still have lumps. Taste, and add salt if needed. Remove from the heat and let cool for a few minutes.

Crack the eggs into a liquid measuring cup and stir with a fork until evenly blended. Stir a spoonful of the chickpea flour mixture into the beaten eggs to temper them, then stir the eggs and a few gratings of fresh nutmeg into the saucepan to form a thick, soft dough. If it is particularly stiff and lumpy, use an immersion (stick) blender to make it smooth and a bit more supple.

Lightly grease a spatula (offset would work nicely) with cooking oil spray. Spoon the dough onto a cool work surface, using the spatula to spread it evenly into a slab that's about 10 inches square and 3/4 inch thick. Let it cool for 10 to 15 minutes, until fairly firm.

Preheat the oven to 400 degrees. Grease a rimmed baking sheet with a little butter.

Use a sharp knife to cut the slab of gnocchi dough into 2-inch squares, arranging them on the baking sheet in rows that slightly overlap. Scatter the butter pieces and cheese evenly over the gnocchi. Bake for 15 to 25 minutes, until a golden crust forms on top.

Serve warm, with the sauce.