How to Make the Perfect Asparagus Tart 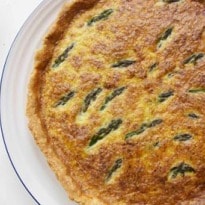 The pungent, herbaceous flavour of this treat makes it an excellent partner to rich, creamy cheeses and custards.

It has been a deadly long winter, and, as the rain seeps down outside, it's hard to believe it's quite over yet, but it is, and the proof is sitting on the kitchen counter. A big box of asparagus, the first grass-green taste of the feast to come, harbinger of ripe tomatoes and tiny broad beans, courgette flowers and fragrant berries; to me, it seems a minor miracle.

Almost a month later than normal, thanks to the unreasonable weather (but all the more welcome for it), for the first few days I won't even be patient enough to knock up a batch of hollandaise to gild this particular lily - a blob of butter and a dash of sea salt is all that stands between me and my lunch. But once I've had my fill of such simple pleasures, I begin to consider other means of cramming as much asparagus as possible into my diet before it disappears for another year. It has always seemed a bit wasted in soup to me, but it's gorgeous in salads, or wrapped in ham, or stirred into a risotto.

This year, however, I have belatedly discovered the joys of asparagus tart: the pungent, herbaceous flavour makes it an excellent partner to rich, creamy cheeses and custards, and it's easy to make a little go a long way. If the weather really perks up, you could even take it on a picnic.

Without a doubt, the star of this particular show. Most recipes lightly steam the asparagus first (with times varying from Hugh Fearnley-Whittingstall's three minutes to Nigel Slater's seven-eight in Tender) but chef Marcus Bean's version for the British Asparagus growers' association chargrills the spears instead. This looks pretty, but they stay too crunchy for my liking. I prefer them firmer than Slater's though, for a contrast to the creamy filling.

Delia Smith and Slater chop their asparagus into short lengths, US magazine Bon Appetit purees the stalks and adds them to the filling, and everyone else uses the vegetable whole. Although the long stalks look pretty, they make for uneven distribution, and I really like the extra boost of asparagus flavour the pureed stuff provides, so I'm going to combine the Smith/Slater and Bon Appetit methods.

Most recipes stick to a fairly standard custard quiche filling: a mixture of double cream and eggs for Slater, Fearnley-Whittingstall and Margaret Costa in her Four Seasons Cookery Book, while Bean goes for double cream, milk and eggs, and Smith for single cream and eggs: both yielding a slightly lighter filling that's rather too eggy for my liking. Double cream gives a smoother, wobbly texture that's the perfect rich foil for the crunchy asparagus. Bon Appetit uses ricotta cheese instead of cream, pureeing it along with the eggs and steamed asparagus stalks to make a pale green, intensely flavoured paste. It's nice enough, but, compared with the cream, disappointingly grainy in texture.

Shortcrust is the most popular choice: Slater and Bean add a little extra richness with an egg, and Smith flavours her butter and lard version with grated cheddar, while Bon Appetit goes for ready-made puff pastry. I'm not particularly keen on puff pastry: the bottom seems soggy because it's not robust enough to stand up texturally to all that creamy cheese.

Cheese is also, I think, unnecessary. Fearnley-Whittingstall eschews pastry altogether, and makes an intriguing polenta crust, flavoured with Parmesan and chives. I like the idea a lot, but it's too rustic for the elegant asparagus tart I'm after here, and, I think, too hearty for this time of year.

I was intending to lump cheese along with all the other flavourings that people burden asparagus with, but as every single recipe, bar Costa's, uses the stuff, it seems to merit its own entry. Cheese is generally a good thing when it comes to asparagus: the strong, fresh flavour works very well with both assertive parmesan, as used by Smith, Slater and Bean, and creamy, mild cheeses such as Bon Appetit's ricotta.

That said, Bean tops his tart with goat's cheese, which competes with the asparagus - perhaps the one I used was too strong. Smith also adds cheddar to her filling, and, like the comté deployed by Bon Appetit, and Fearnley-Whittingstall's gruyère, the slightly sweet nuttiness proves the ideal match. Mixing the cheese into the filling, as Smith does, rather than scattering it on top as Fearnley-Whittingstall and Slater suggest, makes for a more harmonious marriage. Smith and Fearnley-Whittingstall both use cheese in their crusts, but this is overkill: the contrast between the plain pastry and the filling is a pleasing one.

In place of cheese, Costa uses grated onion or shallots, cooked in a little butter until soft, and then added to the custard. She's not alone in this: although it also adds cheddar to its tart, the Ballymaloe Cookery School includes a mixture of spring and ordinary onions in the filling as well. I think the asparagus ought to be the only vegetal flavour here, and the same goes for Costa's chopped parsley, Slater's tarragon and Fearnley-Whittingstall's chives. Despite the strong shallot flavour of her tart, Costa has a commendable commitment to letting the star ingredient shine, writing that, though the reader might want to add a little grated gruyère, or some smoked bacon to their tart: "for me, the delicate flavour of the asparagus is enough".

Bean doesn't think so, however: he adds chopped bacon, fried until golden brown, to the filling. If that seems de trop, Bon Appetit rides roughshod over dignity of the tart's main attraction by stirring in soppressata "or other salami" into the filling. Soppressata, of the kind that can be sliced, is a spicy cured sausage from southern Italy. The bacon works better than the salami, but, in my opinion, the asparagus needs neither. Fearnley-Whittingstall strikes off in quite another (slightly odd) direction by stirring Dijon mustard into his filling. I love mustard in most contexts but, here, I just don't get it. Asparagus needs no such help in the flavour department: let it speak for itself.

To make the pastry, grate the butter into the flour and rub in roughly with your fingertips to coat (or use a food processor). Stir in the egg yolk and a pinch of salt and, if necessary, a drop of cold water to bring it together into a dough. Form into a thick disc, wrap and chill for 20 minutes.

Preheat the oven to 180C (350F/gas mark 4) and grease a 22cm round tart tin. Roll the dough out on a lightly floured surface and use to line the tin, pressing it into the sides with a small ball of excess dough. Prick the base with a fork, line with baking paper and baking beans or pulses/rice and bake for 15 minutes until lightly golden. Remove the beans and paper and put back into the oven for five minutes.

Meanwhile, steam the asparagus for about four minutes, until al dente. Chop into short lengths, and put about half of the stalks into a food processor (keep all the tops). Puree. Pour the double cream into a jug and add the eggs. Beat together, then stir in the puree and the grated cheese. Season well.

Arrange the remaining asparagus pieces on the bottom of the tart, and then pour in the cream mixture. Bake for about 35-40 minutes until jiggly but set, and golden on top, and allow to cool slightly before serving.

What are your favourite recipes for making the most of the British asparagus season - or do you prefer to keep things simple and eat the stuff as naked as the day it was pulled? And what about the white asparagus that mainland Europe gets so excited about at this time of year: does it have any fans lurking on this side of the Channel?