How to Make the Perfect Baklava 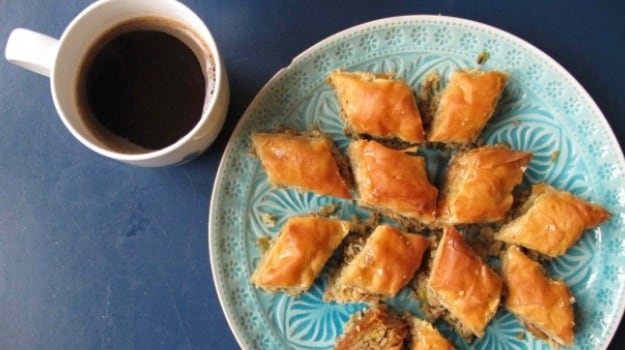 The sultan of sweets or a sugar bomb not worth the risk of diabetes? Which is your favourite filling - and where makes the best version?

I have a baklava problem. Many recipes caution that, since the sweet Middle Eastern pastry "is very rich and sweet", in the words of the great Claudia Roden, "portions should be very small". In theory, then, one tiny lozenge of filo and ground nuts, dripping with tangy syrup, should be quite enough for anyone, perhaps two if they're particularly greedy - yet this week I discovered I'm quite able to put away half a tin of the stuff without coming up for air. Which is why, perhaps, it would have been wiser not to learn how to make it. As it happens, despite food writer Rebecca Seal's warning that baklava is "notoriously tricky to make", I found it surprisingly easy. Perhaps too easy.

Although most sources agree that it's probably Turkish in origin, baklava spread throughout the Ottoman empire, and can be found as far afield as Albania and Azerbaijan - with a similar spread of fillings. Nuts are the one constant, credited in the Oxford Companion to Food to the Persian influence on the regime's kitchen. Walnuts are popular, especially in more northern climes, with almonds and pistachios appearing further south and east - Roden notes, in her Book of Jewish Food, that "the pistachio filling was considered the grandest". She allows for any of the three, while Seal specifies walnuts in her book The Islands of Greece, as does Arto der Haroutunian in his classic Sweets and Desserts from the Middle East.

Sabrina Ghayour uses a mixture of ground almonds and slivered pistachios in Persiana, and Sally Butcher (who wins my trust in Snackistan by admitting that baklava is "kind of addictive ... Quite a lot of self-confessed diabetics come into the shop to buy it, assuring us that they will just fiddle with their meds to compensate") suggests ground almonds, but mentions that one could also use cashews, walnuts or pistachios. As I haven't seen cashews mentioned elsewhere, I decide to give them a try in her recipe.

The choice of nuts is down to personal taste (and budget - pistachios are still far more expensive than any of the other nuts). I like the slight bitterness of the walnuts as a base, mixed with sweet ground almonds and a few pricey pistachios, both for their lovely flavour and the crunch they bring. Cashews, while nice, are too subtle to stand out here.

Roden adds melted butter and sugar to her nuts, and Seal, Butcher and Ghayour mix in sugar (Der Haroutunian leaves them au naturel). I like the richness the butter brings to potentially dry ground almonds, but given the drenching of syrup that's coming I'm going to bypass the extra sugar.

Modern baklava is always made with paper-thin filo - except when it's made by me, influenced by a throwaway comment made by Der Haroutunian: "If you wish to be more authentic, use homemade baklava filo," which I take as a direct challenge. Homemade filo, for some reason, is much harder to master than homemade strudel pastry; it's far springier and more difficult to stretch out without tearing.

I won't pretend the results were a triumph; the only benefit I can see to making your own is that Der Haroutunian's recipe calls for a little more salt than the commercial sort, which makes a nice contrast to the sweetness of the rest of the dish. I can rectify this, however, by adding some to the filling. Unless you're a pastry demon with the patience of a saint, I'd recommend using ready-made filo. Really, it's how you treat it that's important. Not all the recipes are generous enough with the butter, which can make the result rather dry. It's important to brush every layer with melted butter - and make sure you trim the edges, rather than folding them in, so you don't end up with wodges of dry filo around the sides. Roden uses a mixture of melted butter and vegetable oil for this purpose, and Der Haroutunian goes for clarified butter, but I can't see the benefit of either, although a professional will no doubt be able to enlighten me. Until that time, I'll stick with butter.

Der Haroutunian cautions the cook to "press on the sheets as little as possible. This ensures that air is trapped between the layers and so enables the sweet to rise". I try my best, although after brushing them with butter it's hard to see what air could be left. Seal and Butcher both make baklava rolls, rather than the more conventional layered pastries; it's a quicker method, but a less satisfying one, as the smaller ratio of pastry to filling allows them to absorb less syrup. Credit must go to food writer and stylist Carol Tennant, who kindly advises me how to cut baklava neatly after seeing my woeful early attempts online.

Der Haroutunian adds nothing to his walnut filling, but this seems a wasted opportunity when so many gorgeous Middle Eastern flavours pair so perfectly with nuts. Butcher and Ghayour both put in cardamom, which always tastes thrillingly exotic to me, and I love the latter's orange zest, too, which contributes another much-needed bitter note to proceedings. Butcher also adds rose or orange-blossom water, but I think this is more easily mixed in with the syrup.

When you take your baklava out of the oven, you could be forgiven for being disappointed by the dry and crackly wasteland you've produced - which is where the syrup comes in. The pastries should be drenched in the stuff (although Roden allows that "if you do not want the pastry too sweet, reduce the amount of syrup by up to half"). The simplest syrup comes from Butcher, who, although she also gives a more conventional recipe, informs me that originally these pastries would have been made with honey or date syrup, and supplies a version that uses these, melted in water. I like the flavour of honey, but here I find it a little strong.

The others add lemon juice to conventional white sugar, which contributes a welcome tanginess, with Roden and Der Haroutunian stirring in orange-blossom water and rose water respectively. I love both, but given the orange zest in my filling I've plumped for the former. Most recipes add the syrup as soon as or shortly after the pastries come out of the oven, so it can be absorbed as they cool, but Roden shares a highly "unorthodox secret trick" of her aunt Latifa's - she returns the syrupy baklava to the oven for five minutes, explaining that "the pastry made this way is among the best I have eaten". And when Roden says that, you know she's right.

1 tbsp orange-blossom water (or to taste)

Melt the butter. Coarsely grind or chop the walnuts so you have a chunky rubble, then stir in the ground almonds and slivered pistachios, followed by the zest, salt (if using), cardamom and 5tbsp of melted butter. Mix well.

Spoon the nut mixture over the top evenly, but without pressing it down too firmly. Top with the rest of the filo, again brushing each sheet with butter before adding the next, and being particularly generous with the top.

Use a sharp knife to cut through the layers in parallel lines to make diamond shapes. Bake for an hour.

Meanwhile, put the sugar and lemon juice in a pan with 125ml of water. Bring to the boil, stirring to dissolve the sugar, then simmer for about 10 minutes, until syrupy. Take off the heat and allow to cool slightly, then stir in the orange-blossom water to taste (brands vary greatly in strength, so add a little at a time). Set aside.

When the baklava is golden, remove from the oven and turn up the heat to 180C/350F/gas mark four. Once it has come to temperature, pour the syrup over the top, especially along the lines, and put back in the oven for five minutes. Remove and leave to cool completely, when it should have absorbed all the syrup. Run a knife along the lines to loosen them before attempting to lever the pieces out of the tin.

Baklava: the sultan of sweets, or a sugar bomb not worth the risk of diabetes? Which is your favourite filling, and where makes the best version?