How to Make the Perfect Devilled Eggs 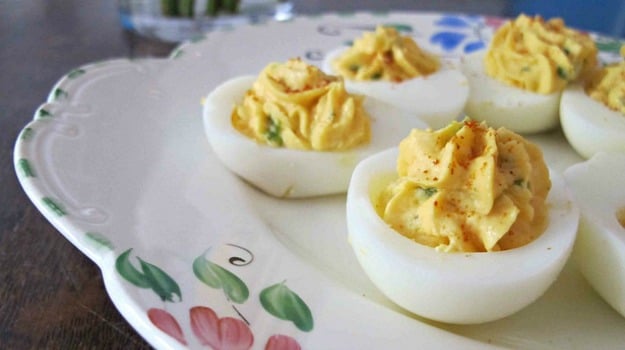 A retro canape, but an wickedly popular one. Do you prefer yours with an almighty kick or just a hint of heat?

Devilled eggs (or “dressed eggs” if you’re from the God-fearing American South, where they feature heavily at church suppers and potlucks) are one of those dishes that is so much more than the sum of its parts. Make all the fancy canapes you like, but I’ll bet my bottom dollar the eggs and cocktail sausages still disappear first. There’s a good reason you never see a leftover devilled egg.

In the US, where they’re considered “grandma food” par excellence, devilled eggs have been enjoying an unlikely renaissance as bar snacks, but here they’re only just starting to show up on hipster menus. At about £4 a plate, however, I think I’d prefer to learn how to make my own.

The idea of stuffing eggs is a very ancient one, but the devilled variety is a newer innovation. Strictly speaking, anything described as devilled should be spicy, but this bandwagon has run away with itself – like a good catalogue model, the humble egg is versatile enough to take on almost any flavour humanity can throw at it, from simple smoked salmon to hipper-than-thou kimchi.

In short, there are as many ways to stuff an egg as there are to skin a cat, so here I’ve tried to stick to the classic variety. The first recipes, which pop up in late 19th-century America, generally feature some mixture of hot mustard and chilli pepper, tangy vinegar and something creamy, and these have been my blueprint here. If you’d like a blue cheese and celery version, or one with barbecue flavours, you’ll just have to look elsewhere. You massive pervert.

Although clearly you can devil any kind of poultry egg you like, from quail to ostrich, the classic recipe uses the hen’s variety, hard-boiled. Opinions on how best to get them to this state differ greatly, from Simon Hopkinson, who puts the eggs in a pan of cold water, brings it to the boil, then takes it off the heat and leaves it to stand for 5 minutes, to Chef John who leaves them in there for 17 minutes, and blogger Ree Drummond and chef April Bloomfield who boil them for 10 minutes.

All of these techniques work just fine as long as you get the timings right; this is one occasion where you don’t want the yolks to be at all soft in the middle, because any gooey bits will end up as a chewy lump in the filling. Eggs cooked for longer are also noticeably easier to peel.

I prefer to cook them from cold, to prevent rubbery whites, but for long enough that they are firm all the way through; 12 minutes should be fine for medium eggs. Storing them on their side for 24 hours before cooking will help to centre the yolks, which will make the finished dish more attractive, but if you don’t have time, this is not essential. Bear in mind that fresh eggs are harder to peel than older ones.

Hopkinson, in his book Simon Hopkinson Cooks, chops the whole eggs into a kind of salad, serving them on toasts with smoked roe. Delicious though this is, it’s obviously not the kind of devilled egg I’m after here.

Edna Lewis, the queen of Southern cooking, and her protege Scott Peacock, prefer their eggs standing up, rather than cut in half laterally, a detail I only pick up when re-reading the recipe after making it. I imagine this might look pretty at a party, butwould make a cumbersome mouthful.

They also push the egg yolk through a sieve to finely chop it, while Martha Stewart and Bloomfield, writing in A Girl and Her Pig, use a food processor to make the filling. I’m not keen on these super-smooth versions; elegant though they may be, I like a little of the furry, almost velvety texture of the cooked yolk.

Bloomfield chills both the whites and the prepared filling for 30 minutes before assembling them. Though a cold egg is easier to cut cleanly, as they’ve already been peeled and halved, I’m not quite sure why, except for the fact she seems very keen on ice-cold devilled eggs. If you are too, follow her lead.

The yolk must be mixed with something even richer, both to bulk it out (the filling of a devilled egg should rise magnificently from the white, rather than just filling the hollow itself) and to enhance its flavour.

Mayonnaise is the most popular choice, though Marion Harland, writing in 1882, moistens them with just with “a very little melted butter” and Hopkinson sour cream. Margaret Anne Mitchell and Rick Elli , whose recipes were both winners at the Southern Foodways Alliance devilled egg contest (consider this article an application to judge any future events), add softened butter to their mayonnaise, Bloomfield chooses creme fraiche, Chef John cream cheese, Lewis and Peacock double cream and Stewart avocado.

All these do the job, which is to say they supply a smooth richness, but I find sour cream and creme fraiche too tangy in conjunction with the mayonnaise, cream cheese a bit claggy and double cream bland, while the avocado, though lovely, has too distinctive a flavour (and colour) of its own. Mayonnaise alone is quite acceptable, but a little soft butter makes them into something really special – as Ellis says, “stuffed or devilled, butter is the answer”. In fact, that could be a good mantra for life.

As discussed, a devilled egg should have a certain heat to it, though it shouldn’t be aggressively so – the church picnic is not the place for too much spice.

Mustard is, in my opinion, the most important seasoning: Drummond uses yellow, which, though all-American, lacks sufficient punch, but most people go for Dijon. I, however, like Mitchell, prefer the sweet, almost peppery heat of dry English mustard powder, especially as vinegar is another key flavour.

Drummond adds it in the form of pickle juice (AKA the liquid in a jar of gherkins) and white vinegar, Lewis and Peacock go for white wine vinegar, Bloomfield the champagne variety, Chef John rice vinegar, while Ellis and Stewart prefer lemon juice. Again, any of them work fine (though depending on your pickles, the first has the potential to make your devilled eggs taste powerfully of a McDonalds hamburger) but I like the smooth and relatively subtle white wine sort.

You can also add further heat in the form of a chilli sauce (mild green Tabasco for Hopkinson, savoury sriracha for Chef John), paprika or chilli powder. A final dusting of cayenne pepper or paprika looks pretty, but I prefer to add chilli in liquid form to the filling, so it blends better with the other ingredients – use whatever hot sauce you have to hand. (Hopkinson also adds curry powder, which works brilliantly with eggs, but is not quite in keeping with the hot and tangy character of the classic devilled variety I’m seeking to perfect here.)

Drummond and Lewis and Peacock stick some sugar in there for good measure, which replicates the sweet flavour of the popular Miracle Whip version (a sweet, tangy mayonnaise hybrid rather like a thicker version of salad cream). Lacking a true Southern sweet tooth, this makes me feel a bit sick, but by all means go ahead and add it to taste if you’re a fan – Hopkinson’s celery salt suits my tastebuds much better.

Drummond mixes chopped pickles into her filling, and Mitchell chopped capers: both flavours with work well with egg, though, like Hopkinson’s dill, they have a tendency to dominate – I’ve gone for the subtler flavour of Mitchell’s chives. Chef John makes sugar-glazed jalapeño rings as a topping, which is a nice idea, though a sprinkle of cayenne does a similar job more quickly, as well as fitting better with the retro charm of the eggs.

For maximum retro-chic points, pipe the filling into the eggs using a star-shaped nozzle. You should probably serve them on a doily as well, but I’ll leave that up to your own conscience.

Put the eggs in a pan large enough to hold them in one layer and cover with about 2cm cold water. Bring to the boil, then immediately turn down the heat so the water just shivers, and cook for 12 minutes. Scoop out and place under cold running water until completely cool.

Rap the eggs against a hard surface to crack the shells all the way round, then starting at the blunt end, carefully peel them. If you really want to impress, cut a little off each side so they will sit flat on the plate, then cut in half.

Scoop out the yolks into a small bowl and mash with a fork. In a separate bowl, whip together the mayonnaise, butter, vinegar, mustard powder, hot sauce and celery salt with a little pepper until well combined, then stir in the egg yolk and chives. Taste and add more of any of the seasonings to suit your taste.

Spoon or pipe into the egg whites, arrange on a plate and sprinkle with a little cayenne pepper before serving.

Devilled eggs: proper party food or something best left in the past? Were they ever as popular in this country as in the US – and which other retro canapes would you like to see revived?