Ande ka Funda: Regional Variations of Egg From Across India 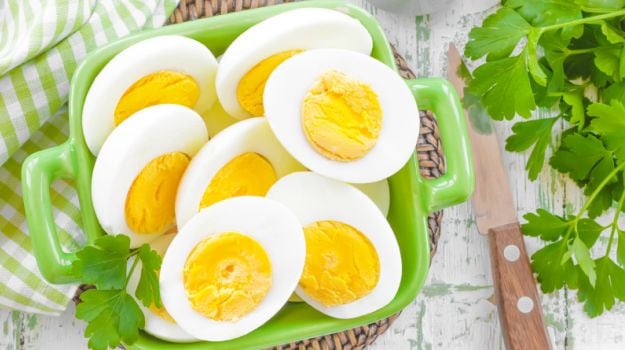 Highlights
Growing up, I remember how hard it was for my mother to get me to eat eggs. She would try recipes beyond her measure just so I wouldn’t make a fuss. I don’t think the egg and I began on a friendly note till I ate my first French toast. And mind you, it was the desi version, tweaked a bit by my father, which converted me into an egg lover overnight. He’d take two slices of large sandwich bread, grate cheese between the two (we didn’t have cheese slices back then), and then dip both the slices held together gently between the fingers into a bowl of beaten egg (that had already been flavoured with salt, pepper, chopped onions, tomatoes, and coriander), and then fry it. That's how I fell in love with eggs.

We all know that proteins are important for our body, and eggs are a good source to derive them. Apart from that, egg whites are sources of vitamin B2, selenium, Vitamin D, B6, B12. You also get minerals such as iron, zinc, and copper. Yes, the egg yolk is known to have more calories and fat but they are also a source of fat soluble vitamins A, D, E and K. Fortified eggs nowadays even come with Omega-3 fatty acids. And did you know that eggs are considered to be one of the few sources of food that contain all the eight important amino acids that are not found in the body but have to be absorbed through food?  For years, talks and research claimed that the egg yolk contains high cholesterol levels as well, which is why people with high cholesterol were asked to avoid egg yolks, but more current research says that eggs contain one third of the cholesterol that a body can absorb in a day. Of course, if you have dietary concerns, or a history of high cholesterol in the family, it’s best to consult your doctor before deciding to eat an egg every day.

The original French Toast entered my life much later, and it was one of the most divine things I had ever tasted. In this dish, cinnamon powder, some vanilla essence, and milk were beaten together and placed in a bowl deep enough for bread to soak in the mixture. A slight thickly cut slice of bread was then soaked into the mixture and shallow fried in a skillet that was greased with butter. I remember eating it with honey, and some chopped bananas on top. Later, I went on to discover that it tastes so much better with freshly cut strawberries, and some real maple syrup.

In a Bengali household, the egg curry, which is cooked rather differently from the way it’s made in South India, was commonplace. I began to understand the beauty of it much later. Duck eggs were an occasional treat, to be had poached or fried for “the best flavour,” dad would say. Over time, my experiments with the egg graduated to different levels. I was curious how one tiny little thing could be so versatile.

While in Kolkata, a rather famous dish, is the Dimer Paturi (steamed egg). Here boiled eggs (not cut, but with slits made on them) are first cooked with chopped onions, mustard paste (spiked with green chillies and turmeric powder), and chopped coriander leaves and then steamed in a double boiler on low flame for about 15 minutes. This is the simpler version. If one has the time, and patience, the cooked eggs can be wrapped in a banana leaf and then steamed. It’s usually eaten with rice, or can also be eaten with rotis.

I ate the Akuri for the first time at a family friend’s home, which is also when I learnt that the dish could even be a little sweet. This Parsi version of the scrambled egg is made with onions, tomatoes, coriander, green chillies, ginger, and garlic (all chopped finely). All these ingredients along with some turmeric, coriander, cumin powder, red chilli powder, and salt are sautéed well. The eggs are then beaten and stirred continuously till the desired consistency is reached. We liked them slightly wet, so she would oblige. The preparation in fact is pretty much how masala scrambled eggs are made. The aunt would lovingly spread butter onto toast and serve it with the Akuri.

About 12 years ago, I had my first tryst with Kothu Parotta, from a street side shop in Ernakulum. With expert hands, the vendor tempered the mustard seeds and curry leaves, and added chopped onions, ginger, green chillies, tomatoes, red chilli powder, and salt and sautéed them for a while. He then took the parotta, shredded them quickly and added it in into the wok. Once the spices coated the parotta, he broke about two eggs on top and began scrambling them in the pan. The mix was cooked till the spices were all soaked up. I can’t say I loved it, but it did remind me of a deconstructed version of the egg Kathi roll I had grown up on in Kolkata.

Yet another fascinating dish is the Kodi Guddu Gasagasala Kuru. It’s made Andhra-style where fried eggs are cooked with a poppy seed paste, and it’s not exactly a quick dish. In this, boiled eggs are first shallow fried in oil till they are browned. The initial tempering is done with mustard and cumin seeds, and ginger-garlic paste is added. After a few minutes of sauteing, a mix of salt, red chilli powder, coriander powder, powdered roasted methi seeds, turmeric power and some water is added to make the base of the curry. To this poppy paste, a little bit of tamarind paste and jaggery are added. Once the curry is ready (it takes about 5-7 minutes), the eggs are placed in the wok and the flame is reduced. After it is cooked for about 10-12 minutes, coriander leaves are sprinkled on top as garnish.

Promoted
Listen to the latest songs, only on JioSaavn.com
Of course, there’s always the simple egg dosa for breakfast. All you need to do is crack open an egg on top of a dosa that is partially cooked. I like to cover the frying pan after adding the egg so as to allow the top of the egg to steam. Sprinkle some salt and pepper and you’re good to go.