How to Make the Perfect Greek Salad 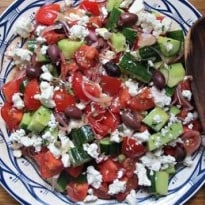 Is the Greek salad a culinary cliche or summer classic? How do you perfect such a simple dish - and has anyone ever had a really bad one?

I was amazed to discover we hadn't yet tackled the Greek, or village, salad in this column. It seems a glaring omission for what is clearly a bona fide summer classic - or, if you're Nigella Lawson, an "abominated fixture in the culinary canon which no appetite for retro-chic can make cool" - a description which forces me to sadly acknowledge my own terminal uncoolness. Ripe red tomatoes and cooling cucumber, rich olives and salty feta - I'm not sure I can better Nigel Slater's description of it as "the ultimate high-summer salad ... best eaten with sand between your toes and salt on your lips".

In fact, it is so beautifully simple that it's a tough one to get wrong, sand or no sand. That said, it's pretty rare to get one outside Greece that really knocks your socks off. Anyone can make an OK Greek salad, but how do you do this classic justice?

Tomatoes are non-negotiable - and they should be as sweet as possible. If you struggle to find really ripe ones, even at the height of summer, then do as Lawson suggests and sprinkle the slices with a little sugar, so they can macerate while you prepare the rest of the salad. Cucumber is another must, though Lawson replaces it with fennel on the basis that this is less likely to make the salad wet and soggy. The aniseedy flavour does work well here, and you could by all means add it as an extra, but for me, the cool blandness of the cuke is one of the chief pleasures of this dish on a hot day. Indeed, Nigel Slater cautions readers to "make sure the cucumber is chilled. This salad must be cold and salty to be truly refreshing." Both, my panel of testers decide, are best roughly chopped into bite-sized chunks - thick whole rounds of cucumbers are difficult to shovel in at sufficient speed to satisfy the greed a good Greek salad should inspire.

Everyone uses red onion, but only Lawson and Slater pander to feeble British palates by soaking it in vinegar to make it "milder and less 'oniony'", in the words of the latter. Lawson also soaks it in the olive oil she is going to use to dress the salad, which infuses it with flavour even as the vinegar robs it of its bite. I too have a horror of raw onion outstaying its welcome in my mouth, so this is a trick I'm happy to adopt.

Jamie Oliver and Lawson put cos lettuce in their salads, and Tessa Kiros suggests a handful of purslane or rocket, but I'm not keen on the texture of either in this salad - the feathery leaves just don't sit happily among all those chunks. Though conceding that it is not strictly canonical, Slater is sympathetic to the idea of adding "a little thinly sliced green pepper if you wish", while coming down heavy on those who go one step further: "whatever anyone says, red pepper doesn't really belong here". My panel doesn't think the green stuff does either, finding it unpalatably bitter.

A Greek salad has to include feta and olives - preferably kalamata, and preferably with the stone still in so they remain plump and firm. Jamie Oliver fries his with blanched almonds but, nice as this is, I prefer them cold and pungently salty, and while the crunch of the nuts works well, the flavour feels a bit odd with the other, fresher ingredients. Kiros adds capers too, which is apparently common practice in the Dodecanese islands, and their sour saltiness is more welcome than the sweeter gherkins Slater suggests as an optional extra.

Slater says that "in Greece the cheese comes in one thick slice, not chopped or crumbled into little bits", and one of the tasters, who handily turns out to have lived in the country, concurs. But, though this looks handsome, it is far less practical than serving it ready crumbled for even distribution. If aesthetics matter, however, by all means leave it whole. (As a side note, not all fetas are made alike - the flavour and texture varies by brand, so it's worth trying a few to find out which suits you. I have a soft spot for the barrel-aged stuff, though it is more expensive.)

Oliver's modern Greek salad whizzes up the feta with chickpeas and spinach to make a sort of green hummus, then encases this in little filo pastry parcels to serve with the salad part of things. It is a nice idea, but I'm underwhelmed by the results - the feta seems to have lost its punch in the process, and the filling tastes bland and stodgy. It's just not worth the faff.

Vefa Alexiadou (Greece's answer to Delia Smith, apparently) suggests finishing the salad with some chopped hard-boiled egg. This finds one vocal fan among the testers, and would certainly bulk it out if you wanted a more substantial dish for lunch, but the rest of us aren't too keen on the combination.

Oregano is the classic - most people use dried, but I love the subtler aromatics of Slater's fresh variety if you can find it. Oliver uses coriander and mint, Alexiadou parsley and Rick Stein dill - all herbs that pair well with these ingredients, but I don't think you need anything more than oregano, a flavour that to my mind is best left alone. Slater suggests adding a chilli or two as yet another extra; again, it works fine (and better than Oliver's smoked paprika), but it's not entirely necessary.

Olive oil and red-wine vinegar are the most common choices. Alexiadou whisks in a pinch of mustard powder and Lawson and Slater a squeeze of lemon, but my favourite addition is Stein's teaspoon of ouzo or pastis. I wouldn't recommend rushing out to buy a bottle specially, but if you happen to have an unwise holiday purchase gathering dust, this is an excellent way to use it up; it introduces a subtler note of sweet aniseed than the fennel or dill already mentioned.

And, of course, if you want to get rid of the rest of the bottle, there's nothing like a shot of ouzo to get you in the holiday mood ...

Slice the onion as thinly as possible (if you own a mandoline, deploy it here). Whisk the vinegar with half the oil and stir into the onion. Leave to soak for at least 20 minutes, but a few hours won't do any harm.

Cut the tomatoes into generously bite-sized chunks, sprinkle with the caster sugar (if using) and a good pinch of salt, and leave for 10 minutes.

When ready to serve, roughly chop the cucumber into chunks and arrange on a platter. Add the tomatoes, onions (reserving any soaking liquid), olives and capers. Whisk the rest of the oil into any liquid remaining in the onion bowl, along with the ouzo, if using, then use this to dress the salad, along with most of the oregano.

Crumble the feta on top, and sprinkle with the remaining oregano to serve.

Greek salad: culinary cliche or summer classic? Is it the dish that is impossible to spoil, or do you have any horror stories to share?