Iced Coffee Has Taken a Back Seat to Cold Brew 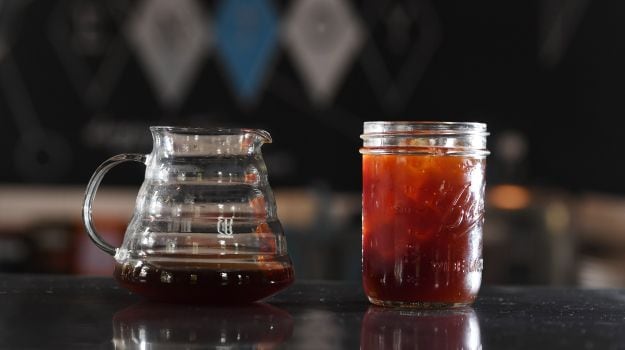 Every day that a Starbucks runs out of cold brew is a day that is ruined somewhere in America. We know, because every day a plaintive soul cries out into the wilderness on Twitter:

"The Starbucks is out of cold brew excuse me while the basic white girl in me dies."

"One of the Starbucks on campus ran out of cold brew I'm transferring."

"Starbucks: we're out of cold brew *metaphorically stabs me in the heart*"

We are too fancy for iced coffee anymore. Now we drink cold brew, the magical caffeinated elixir that is suddenly everywhere, from your fussy, independent coffeeshop to the most proletarian of Dunkin' Donuts. It's the drink of young people. It's the drink of summer.

"It's iced coffee taken seriously, rather than iced coffee as an afterthought," said Peter Giuliano, senior director of the Specialty Coffee Association of America.

If only everyone who was ordering it actually knew what it is.

"It's like when people ask for a Kleenex when they want a tissue," said Josh Brodey, a manager at Slipstream, a Washington coffeeshop. "The word's just floating around. I think about 50 percent of our customers that use the words 'cold brew' don't think of it any differently than iced coffee."But it is different. A traditional iced coffee is made with hot-brewed coffee that has been cooled down. But cold brew is steeped in room-temperature or chilled water, allowing the coffee to slowly infuse over time. Fans say the method results in a mellower, less acidic coffee. People who get heartburn from coffee tend to find cold brew a little easier to digest.

It has to do with chemistry: Mixing hot water with coffee grounds is the most efficient way to extract its oils, acids and fragrance, all of which contribute to its flavor. Coffee brewed hot will have a stronger flavor and smell. But according to the UCLA Science and Food blog, heat can also cause coffee oils to oxidize, and its acids to degrade, which can give it a sour, bitter flavor.

Without heat, it takes coffee longer to become soluble in water - a 20- to 24-hour soak is common - and fewer of those flavors are extracted. Cold brew is less fragrant, and requires twice as much ground coffee to get the right flavor and caffeine - so shops charge more for it. Many shops prepare it as a concentrate, making it an extra-potent brew that can be diluted with water or milk.

Before cold brew hit the scene, the precise breakdown of acids and oils in coffee was probably not something that many drinkers even considered. So how did we get here?

Matt McGuire, coffee director at the Coffee Bar in Washington, demonstrates the process for cold-brew coffee.
Photo by Matt McClain - The Washington Post​

A Subculture Trickles Up

In a less enlightened era, iced coffee was made with leftover hot-brewed coffee that had been sitting out too long. The first specialty cold-brewing apparatus, called the Toddy, hit the scene in 1964. And until the 2000s, it was a pretty niche thing.

"The discussion was had, at that time, between purists and geeks - how if you were to take hot coffee, brew it, and put it in the refrigerator, it would change the taste," said Stephen Schulman, an independent coffee consultant.

But the '90s brought us Starbucks and incredible demand for its iced frappuccinos and lattes. That paved the way for third-wave coffeeshops that brought coffee geekdom, with its Chemexes and Aeropresses, into the mainstream. As coffee companies perfected their technique, the next big leap came from the brand Stumptown, which bottled its cold brew in 2011.

"They put the cold brew in these stubbies bottles, like a Red Stripe," Giuliano said. "That played on the sort of cold brew pun - is cold brew a coffee or a beer? - and that really engaged people. . . . If you're a 24-year-old living in Williamsburg, Brooklyn, what cooler thing is there [than] to be cruising around town holding a beer bottle in the morning?"

From there, other coffee shops hopped on the bandwagon, and for the last two years, the trend has continued to trickle up, culminating when Starbucks and Dunkin' Donuts rolled out their versions of the drink nationwide in July 2015 and August 2016, respectively.

"Our Coffee Excellence Team had been working on cold brew for a few years," Jeff Miller, executive chef and vice president of product innovation for Dunkin' Brands, said in an email. "Given the increasing popularity of iced coffee and cold brew we felt it was the right time."

And Starbucks, following in the footsteps of La Colombe, Compass Coffee and other independent shops, is rolling out the next frontier of cold brew, colloquially called nitro. The cold brew is infused with nitrogen, which gives it a slightly effervescent, creamy texture.

At The Coffee Bar in Washington, customers can get cold brew that has steeped for either 24 or 36 hours, served on the rocks.

"The 24-hour tastes really fruity, but nicely balanced between that and the chocolatey flavor you expect from cold brew," said coffee director Matt McGuire. "The 36-hour that we serve is markedly chocolatey. It's like drinking Hershey's syrup."

The shop's iced coffee is made Japanese-style - it's brewed directly onto ice. When people confuse the two, "We have a short speech that we do," McGuire said. "We try not to overwhelm people with knowledge, and really just talk about what we serve."

Not everyone has hopped on the cold brew bandwagon, though. Slipstream used to offer cold brew, but now Brodey prefers to flash brew his iced coffee - a technique that involves brewing it hot, then immediately chilling it. He then infuses it with nitrogen and serves it on tap.

"There are a lot of delicious cold brews, but some cold brews taste really similar from one coffee to another coffee," Brodey said. "A lot of what we do at our shop is trying to retain the nuances of different coffees."

Or, as Mark Overly, who blogs as The Coffee Heretic, wrote: "The great thing about cold brewing is it makes poor coffee drinkable. The downside is that it makes great coffee merely drinkable."


The Can for The Fashion Plate

Cold brew is generally a millennial's drink. The marketing intelligence agency Mintel found that 66 percent of American millennials drink iced coffee, compared to 34 percent of GenXers. In the fourth quarter of fiscal year 2015, Starbucks reported a "20 percent increase in the overall iced portfolio with expectations the cold coffee category will double in the next three years," said a Starbucks spokeswoman in an email. A study by the National Coffee Association found that 15 percent of the consumers it surveyed have tried cold brew.

Kevin Kickham, a 24-year-old development specialist at a charter school in St. Louis started drinking cold brew about six months ago, after a barista friend insisted he try it. He became a convert because "the flavor's a lot more full. I definitely like that it's less acidic," he said. Now, it's become a twice-a-week habit.

Still, he thinks flavor isn't the only reason he and his peers have a preference for the drink. It's also that cold brew seems a little more special.

"There's an air of pretentiousness when you say 'cold brew,' " said Kickham. "I think it has a lot to do with how it's marketed."

That marketing tends to be organic, relying on its cool factor and social media. Cold brew looks great on Instagram.

It may also be why Starbucks, which steeps its Nariño Cold Brew for 20 hours and makes it in small batches - though a spokeswoman did not define what "small" meant to the mega-chain - keeps running out of it. It has become a bit of a meme on Twitter: A user will post gifs of sadorangrypeople, along with a report that their Starbucks is out of cold brew.

"Stores brew daily to keep up with customer demand, though as you can imagine, may run out briefly from time," said a statement from Starbucks.

Listen to the latest songs, only on JioSaavn.com
"I will never ask for an iced coffee before I ask for a cold brew," he said. But he admits: "I think if somebody put a cold brew coffee and an iced coffee in front of me, I'm not sure I'd be able to tell the difference."