It's Milk Tea Over Coffee For Hong Kong 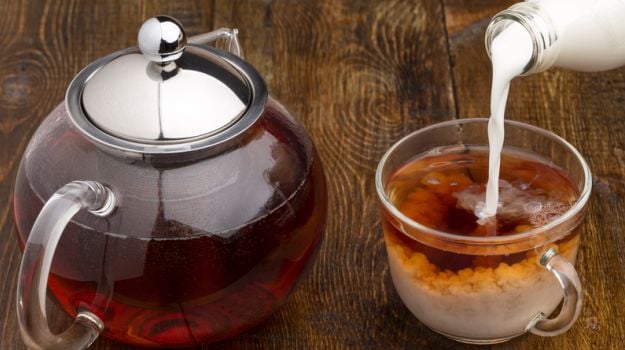 Some cities are fuelled by coffee. In Hong Kong, it's milk tea that keeps things running -- a potent nostalgia-infused caffeine hit, with fierce competition to brew the best in town. There are thousands of restaurants offering the full gamut of international cuisines, but the city's no-frills diner-style cafes, some of them decades old, remain perennial favourites with locals, and still do a roaring trade.

Known in Cantonese as "cha chaan tengs" or "tea restaurants" they serve up cheap local favourites, from fried egg sandwiches and buttery French toast to noodle soups and macaroni. The standard accompaniment is a milk tea, or "lai cha" -- a tangy, deep-tan brew made from blends of black tea strained repeatedly for strength, then mixed with condensed or evaporated milk. The city gulps down around 2.5 million cups a day. At family-run tea shop Lan Fong Yuen, on a hilly market street in Hong Kong's Central district, business shows no sign of slowing after 60 years. Owner Lam Chun-chung says the no-fuss nature of Hong Kong's tea restaurants plays a big role in their popularity in a fast-paced city. "People are always in a rush. Having a quick bite with milk tea is fast and convenient," says Lam, who adds that his cafe has much more character than the growing number of sterile coffee shops. "We represent the grassroots. When you are here you feel a sense of community," he says.

Customers sit around shared wooden tables, many stopping for just 10 minutes to grab a quick breakfast or mid-morning boost. A tea master juggles steaming pots on an electric stove, straining the hot brews through long cloth sieves -- a key utensil for any serious Hong Kong "lai cha" joint. The sock-like strainer has lent Hong Kong milk tea one of its nicknames: "stocking milk tea". At this cafe, tea is strained seven times to intensify the flavour. Lam taught the current tea master his skills and still drinks a cup or two of milk tea each day. It is an addiction, he says, but also a way to monitor standards.

Milk tea is a local institution and has even made it onto an official list of the city's "intangible cultural heritage". Hong Kong's Association of Coffee and Tea says it is also building a global fanbase. The association has been running Hong Kong milk tea contests worldwide for the past seven years, and they are growing. Earlier this month, competitors from Hong Kong, mainland China, Canada and Australia all competed for the "KamCha" or "Golden Cup" award in the association's largest tea competition, on home turf. Local contestant Chen Chi-ping, 44, emerged victorious -- he has been making milk tea in Hong Kong "cha chaan tengs" for 22 years. "Every detail has to be strictly precise -- the heat of the stove, the water temperature," he says. The fragrance and potency, as well as the thick consistency, make Hong Kong-style milk tea unique, Chen adds.

Promoted
Listen to the latest songs, only on JioSaavn.com
It has flowed through the city's arteries for more than half a century, according to association chairman Simon Wong, who tells how it was first served on Hong Kong's docks to sailors and labourers, an earthy adaptation of the weaker version made with fresh milk by the colonial British who governed at that time. "Hong Kong people wanted something with more punch. So we invented this type of brewing," Wong says. The strength of the tea and the canned milk made it value for money -- few ordinary Hong Kongers at that time could afford fresh milk. Wong's father -- a tea trader -- was a proponent of the new concoction, setting up one of the first "cha chaan tengs" in Hong Kong, which still exists today. Mainland China has now also developed a taste for Hong Kong-style milk tea, and immigrant communities across the world are introducing it to new countries, says Wong. The winning formula? Both tea champion Chen and cafe owner Lam agree -- it is the passion to make a great cuppa. "The most important thing is to put your heart into it," says Chen.