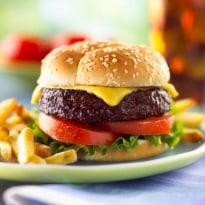 You've been warned over and over again about the perils of munching on crispy fries, a big chunky burger and all that falls under the category of 'junk food'. It makes you put on weight, makes you indisciplined and impatient, and in some cases may also cause brain damage. If these weren't enough, here's another reason why you should stop eating junk food right now.
A new research published in the journal 'Frontiers in Psychology' says that junk food can not only make you put on weight but also destroy your appetite for healthy food. To prove this, researchers at the University of New South Wales, Australia conducted a series of experiments to see how junk food impacts eating habits and diet preferences.

The study was conducted over 2 weeks on two different groups of rats. One group was fed with healthy rat food while the other was fed junk food (with almost 150 per cent more calories) like pie, dumplings, cookies and cake. Both the groups were also given cherry and grape sugar water to drink.

Not only did the second group of rats end up weighing 10 percent more than their healthy counterparts, there were also certain behavioural changes that were noticed. The team, led by Professor Margaret Morris, Head of Pharmacology from the School of Medical Sciences, taught young male rats to associate two different sound cues, each with a particular flavour of sugar water - cherry and grape.The healthy rats responded appropriately to the sound cues while the junk food-fed rats got it all wrong. If they heard a noise associated with grape sugar water, they drank more of it even though they had already consumed a lot of it before. They became indifferent in their food choices and no longer avoided the sound that associated with the drink they had already consumed. This indicated that they had lost their natural preference for novelty. The change even lasted for some time after the rats returned to a healthy diet.

The researchers believe that a junk food diet causes lasting changes in the reward circuit parts of the rats' brain, the part that is responsible for decision-making. Researchers said that these results have great implications on a person's ability to limit his intake of certain kinds of foods as the brain's reward circuitry is similar in all mammals.

Professor Margaret Morris said "The interesting thing about this finding is that if the same thing happens in humans, eating junk food may change our responses to signals associated with food rewards." He added by saying that "It's like you've just had ice cream for lunch, yet you still go and eat more when you hear the ice cream van come by."