KFC Predicts '2015 Will Become the Year of the Pulled Chicken'. Seriously? 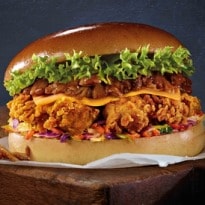 Food purists might turn their noses up at the fast-food chain's latest marketing ploy. But the idea of slow-cooked shredded chicken may not be without precedent

When your entire business is built around chicken, that blandest of meats, it can't be easy to think of new ways to market it, so I imagine the bigwigs at KFC got pretty excited when the US barbecue craze hit these shores.

Three years later, it is finally launching its "completely unique" pulled chicken range, which features a blend of white and dark meat tossed in a mixture of spices, steeped in a sweet molasses-based sauce and then slow cooked for almost two hours (which doesn't really count as slow cooking in the world of serious barbecue, but we'll forgive KFC that) before being squashed into all manner of burger buns and wraps. According to KFC's innovation manager, Louise Direito: "If pulled pork was the dish of 2014, then 2015 will become the year of pulled chicken."

This bold claim made me briefly consider moving to Kentucky for a year, just to get away from this creation - the company hasn't been audacious enough to launch this unique idea in its southern homeland. Because to serve pulled chicken seems to be to completely miss the point of the concept, tangy barbecue sauce or not.

Pulled pork works because it is made with the kind of tasty but tough cuts that demand long, slow cooking, until they are so tender you can pull the meat apart with a fork. It is the generous amounts of fat and (sorry) connective tissue that melts into the meat in the process that makes the dish so irresistibly juicy and delicious.

So, though pulled pork is a speciality of the south-eastern United States, it is based on exactly the same principle as a Jewish beef brisket or, indeed, an Irish stew. But chicken is a fundamentally lean meat. Even when the bird is old and stringy, you need to add fat, as in the larding of bacon lardons in a classic coq au vin, to stop it crumbling into dust. Pulled lamb, pulled goat, pulled beef top rump - all these are ideas to get the mouth watering. But pulled chicken? I was sceptical.

Turns out, however, that pulled chicken is not without historical precedent. In fact, until the 1970s, all references to pulled meats concern either poultry or rabbit, with the first recipe, from the 1737 edition of The Compleat Housewife, calling for six boiled chickens. I have even found an Indian pulled mackerel salad online - strictly speaking, it seems that any meat you can rip apart, caveman-style, qualifies for the term.

So, what is the next thing we can expect to see coming in for the pulling treatment? Well, with vegan food back in vogue, I reckon it can't be long before the pulled tofu burger is launched upon an unsuspecting British public. You have been warned.

Pulled chicken in a bun is not the sole preserve of KFC, it would seem. Photograph: Alamy