Leftovers, thy Name is Turlafel 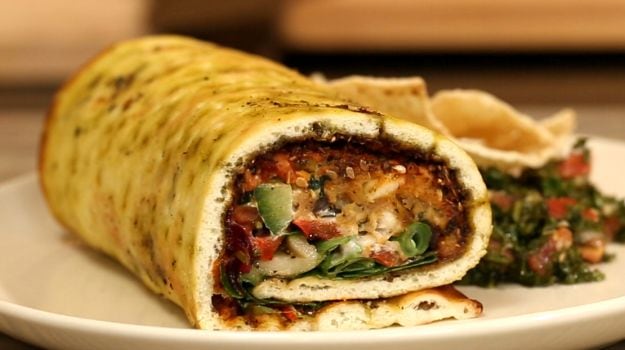 Omnivorously speaking, your standard post-Thanksgiving sandwich is just about perfect: lean turkey, moist and herby stuffing, tart-sweet cranberry sauce. But your appetite for that flavor combo might just tail off before your leftovers are depleted.

Hence, the Turlafel: those components plus the zing of Indian spices, ginger, garlic and fresh herbs, formed into falafel-type patties that are pan-fried to exterior crispness. They can go on, or be rolled into, flatbread along with quick condiments and leftover vegetables. It's the creation of chef Alex McCoy, of "Food Network Star Season 11" fame and the upcoming Southeast-Asian-inspired Alfie's in Washington.

The Turlafel's got global moxie, a bit like the 32-year-old chef himself. The ingredient mixture needs a 30-minute chill, then it's ready to use a number of ways. Technically, it doesn't even have to be cooked (unless you've included beaten egg as an optional binder) and could be used as a sandwich spread. But we're in for the full McCoy approach.

If your stuffing is moist, the beaten egg can be omitted. Our recipe for Corn Bread Apple "Sausage" Stuffing (at www. washingtonpost.com/recipes) was used to figure the nutritional analysis.
Pureed ginger and garlic are available in the international aisle of large grocery stores and in Indian markets.

For the patties: Combine the turkey, stuffing, ginger, garlic, jalapeño pepper, herbs, garam masala and ground coriander in a mixing bowl; use your clean hands to knead the mixture together to form a homogenous mass. Taste, and season as needed with salt and pepper. (If it doesn't quite hold together, stir in the egg.) Cover and refrigerate for at least 30 minutes (to firm up) and up to 1 day.

For assembly: Stir together the harissa and cranberry sauce in a medium bowl. Cover and refrigerate until ready to use.

Scrape out the center of the cucumber, then cut the cucumber into 1/4-inch pieces, placing them in a medium bowl as you work. Add the yogurt and lemon juice, then season lightly with salt and pepper. Cover and refrigerate until ready to use.

When you're ready to build the sandwiches, heat the oil in a large skillet, preferably nonstick or cast-iron, over medium-high heat. Line a large plate with paper towels. Uncover the chilled mixture and form 9 balls of equal size, then flatten them slightly with your hands.

Meanwhile, lay out the lavash, naan or flatbreads on a clean work surface. Spread a generous amount of the cranberry harissa sauce down the center of each.

Once the oil shimmers, add all the patties; cook for 2 to 3 minutes on each side or just long enough to create a crisped crust on each side. Transfer them to the paper-towel-lined plate to briefly drain, then place 3 patties, overlapping them slightly, on each swath of sauce.

Next, layer slices of the red onion over each portion, then some of the cooked leftover vegetables. Top with a generous dollop or two of the yogurt-cucumber sauce, then a handful of the fresh greens/herbs. Serve it open-face, or carefully roll or wrap up the filling in the bread to create a fairly tightly structured wrap sandwich. Cut the wrap in half for easier eating.