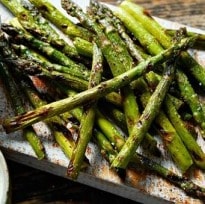 Vegetables tend to get a bit sidelined during barbecue season, possibly due to the undeniable appeal of a charred hunk of meat. Vegetarians and vegans likewise get a sense of being overlooked at this time of year - hot dog roll and ketchup, anyone? - so, for everyone's sake, here's some veggie and vegan barbecue stuff that works as stand-alone dishes or as a side for meat and fish. Win-win.

I fell for the blue cheese/hot sauce combination when I was working in the US midwest 10 or so years ago. It's not exactly sophisticated, but it is one of those partnerships that just works so well, especially as a dipping sauce and with barbecued stuff. Asparagus is lovely just grilled and seasoned, so for vegans omit the cheese dressing, or replace it with a plain soya yoghurt and chive one. If you eat fish, serve these with barbecued scallops or monkfish. Serves two to four.

Blend the cheese and yoghurt until smooth. Wash the asparagus, snap off the woody base from each spear and dry in a clean tea towel. Rub oil over the spears, then cook on a hot barbecue for 30 seconds to a minute, depending on size - they really don't need longer than that - transfer to a tray and season well. Serve the dressing and sauce in dipping pots on the side or dribbled over the top.

The hazelnut butter takes a while to process, so make a decent batch: it keeps for months in the fridge, and works well as a replacement for butter in vegan brownies and biscuits; it's ace on toast, too. Roasting cauliflower brings out its wonderful, nutty flavours, so try it on a non-barbecue day, too, as a garnish for roast lamb or beef (instead of cooking it over charcoal, sear the cauliflower in oil in a frying pan or char-grill). Serves two to four.

Put the nuts and salt in a blender and blitz until very smooth - this will take some time (up to 30 minutes, depending on the power of your blender), and to begin with you will need to stop the motor and stir the mix until the nuts are well broken down and turn easily in the blender. This is tough going on your mixer, so watch it doesn't over-heat: if the motor starts screaming, smoking or smelling of burning rubber, switch it off for 10 minutes. Pour the mix into an airtight plastic container, leave to cool, then store in the fridge.

Remove the leaves from the cauli, then cut the head into florets; halve or quarter any particularly large ones. Roll the florets in oil, then cook on the barbecue - towards the end of cooking if you are using charcoal, on low if gas - turning often: we're after a slow caramelisation here, not instant charring. Once it's a deep golden colour all over, transfer to a dish and season with a squeeze of lime or lemon juice, coarse sea salt, plenty of hazelnut butter (the butter will need a good stir, because the solids will settle to the bottom) and a grind of black pepper.

The very thought of cooked avocado is enough to provoke a loud "Eww!" from some, but they don't know what they're missing: the smoky flavour sets off avocados' natural sweetness beautifully. Cook on a hot barbecue, because you want that char without cooking the flesh too much.

Cut the avocados in half and remove the stone, but leave the skin on. Rub the cut side with a little oil, then barbecue quickly over a high heat - no more than a minute. Transfer to a plate or board and slash each avocado half several times across- and lengthways, so your dressing of choice will seep into the flesh.

These are really good with the slaw below; for non-veggies, they're great with barbecued pork. Makes four.

Put the butterbeans, cumin, lemon juice, garlic, parsley, flour, salt and egg in a food processor and blitz to a coarse paste: you don't want the mix fully pureed, otherwise the burgers will be too wet and will fall apart on the grill. Fold in the onion, breadcrumbs and cheese, then chill for at least an hour.

Squash the mix firmly into patties (use a ring mould, if you have one), but keep them small, so they're easy to handle on the grill. Lay the burgers on a parchment-lined tray and pop into the freezer for half an hour, to firm up a bit.

Cook over a medium grill, but don't try to turn them until they are completely set on the cooked side, otherwise they will disintegrate. Carefully loosen from the grill bars - use a palette knife - then flip over and cook the other side until done.

There are innumerable ways to go with slaws, but I like this fresh red cabbage version because it goes so well with vegetarian, fish and pork barbecue dishes, so covers all bases. To make life easier, invest in a mandolin: they make slicing veg thinly much quicker and easier (the veg slicing attachment on a food processor will also save on slicing time). Add some red onion, spring onion or chives to this recipe, if you like; parsley and peppery radishes are also good additions. Serves four.

Shred the cabbage as finely as possible, put in a bowl, cover and refrigerate until you're ready to serve - in my book, there's nothing worse than soggy slaw, so I dress it only at the last moment. Add lemon juice, olive oil and salt to taste. just before you bring it to the table.

• Mary-Ellen McTague is chef/owner of Aumbry in Prestwich, Manchester.

Mary-Ellen McTague's asparagus with blue cheese dressing and hot sauce: 'One of those partnerships that just works so well.' Photograph: Colin Campbell for the Guardian. Food styling: Claire Ptak