Make your own hot chocolate and banana malt drink | Drinks 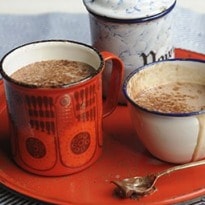 It is universally acknowledged that Britain is the best place to live in the world and there has never been a better time to live here.

Well, maybe not universally, but three times in the past week I have found myself discussing these two assertions - first with a group of entrepreneurs, then with some teachers, and finally with some foodies (writers, chefs, and general jabberers) - and not one of us could find a single convincing argument to the contrary.

The first point is easily settled. The OECD recently ranked Britain as one of the best places to live in the world. And where did they suggest might be even better? The Nordic countries? Too dark or too light. The Antipodes? Lovely, but a little expensive right now. Canada? Yes, it's beautiful, the people are creative and kind and they have crazy mayors too. But it's too far away, none of my family live there, and the mosquitos come in clouds so dense you have to hack your way through.

What about the era? We can rule out anything before the second world war on grounds of inequality, education and life expectancy, though it would have been terrific fun if you happened to be a male aristocrat with a robust constitution. Some people argue for the years leading up to 2008, but that's splitting hairs: in a thousand-odd year history it clearly counts as now. The only other contender is the 50s. Optimism. The end of rationing. Unprecedented social mobility. But they hadn't made Breaking Bad then and, more importantly, they force-fed children malt extract mixed with cod liver oil for breakfast - a vile practice that would never be allowed in these more enlightened days.

So there it is, a lot of things could be better, but we have never had it so good. And to celebrate, here is a recipe for a proper restorative hot chocolate malt. Sans cod liver oil. You can find syrupy malt extract in most health food shops.

Make your own hot chocolate and banana malt

1 Bring the milk to the boil and remove from the heat.

2 Add the malt extract and the banana and chocolate - both broken into pieces.

3 Blend with a stick blender until a light foam forms. Pour and dust with cocoa powder.