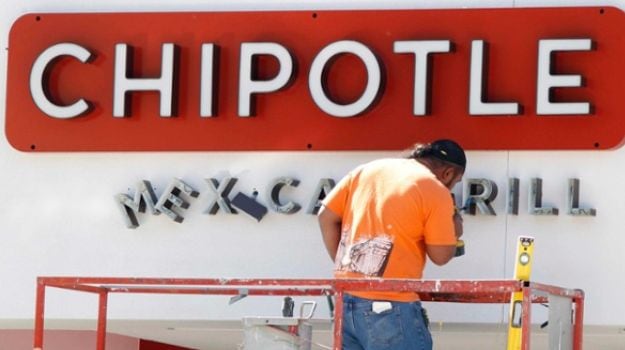 Workers for Huhtamaki, which supplies the bowls for Chipotle’s signature dish, protest for better working conditions, higher pay and the right to unionize

Protesters gathered outside Chipotle’s headquarters in Denver, Colorado, on Wednesday to urge the shareholders to “put people over pigs”.

The crowd of about 50 people gathered outside the building, where the company was having its annual shareholders meeting, to bring attention to the treatment of workers employed by Huhtamaki, which supplies Chipotle with the bowls used for its signature dish: the burrito bowl. Just recently the burrito bowls made headlines in the US when Hillary Clinton stopped by an Ohio location and ordered a chicken burrito bowl.

The Huhtamaki workers from a number of the facilities in the US are demanding better working conditions, higher pay, healthcare and the right to unionize. Their hope is that if they can get the Chipotle shareholders on their side, they can convince Huhtamaki officers to meet with them and hear their demands.

“It might be worth noting that Hutamaki makes our bowls at two different facilities, both of which are unionized,” Chris Arnold, Chipotle spokesman, told the Guardian. “So Hutamaki employees who make anything for us are members of a union. We have no relationship with the plant that’s at the center of this issue.”

Huhtamaki did not respond to Guardian’s request for comment.

Among the protesters is Duane Calloway, 53, a forklift driver at a Huhtamaki plant in Commerce, California. The city is located in the south-east area of Los Angeles County. On Tuesday, Calloway flew to Denver to take part in Wednesday’s actions. AFL-CIO paid for his flight and accommodations. Calloway has worked for the company for over seven years; at the moment he earns almost $15 an hour and works full time.

Forklift drivers are among the higher-paid employees at the plants. Some of the machine operators at the plant make as little as $9 an hour, according to the union. It remains to be seen whether Chipotle workers, whose starting salary is $21,000 a year, will support the Huhtamaki workers in their efforts. In April of this year, judge Melissa M Olivero ruled that Chipotle violated labor laws when it threatened workers for discussing their pay and fired Patrick Leeper for missing work in order to join the Show Me $15 protest in 2013.

“It is always a top priority for us to remain compliant with all local and federal labor laws,” Chipotle said at that time.

The push for a $15 minimum wage is “the big fight out here”, Calloway told the Guardian. Even though he is already getting paid almost $15 an hour, he said he knows it could get better.“Compared to other companies that are union, I should be getting more than I am getting.”

The efforts to unionize have been on going for more than a year.

“One of my friends – he has been in the union – he approached me back in November 2013 and five of us got together and we started working on this,” said Calloway. In an effort to form a union, the workers reached out to local AFL-CIO representatives and “have been going at it since then”. Calloway said that there is support for a union among the workers, but many remain scared. “There’s a lot of older people there. Some got scared, but most people know that the only way it’s going to get better there is with a union.”

A form filed with the US Department of Labor shows that Huhtamaki has hired labor relations consultant firm Cruz & Associates. The form states that the firm has been hired to meet with employees at various locations to “inform them of their rights under the National Labor Relations Act and to answer their question about the union”. The union insists the consultants were brought in to persuade workers not to join the union.

Wednesday’s protest is Calloway’s first. He said that his wife is supportive of his efforts to unionize his workplace.

“She loves it. She is on disability right now, which is why we really need this union.” he said. “We live paycheck to paycheck.”

It remains to be seen if Chipotle workers, whose starting salary is $21,000 a year, will support the Huhtamaki workers. Photograph: Fred Prouser/Reuters