Maple Syrup: All About the Gold-Like, Sweet Ingredient and How to Cook with it

Maple syrup is twice as sweet as regular syrup, therefore just a bit is usually enough to sweeten your meals. 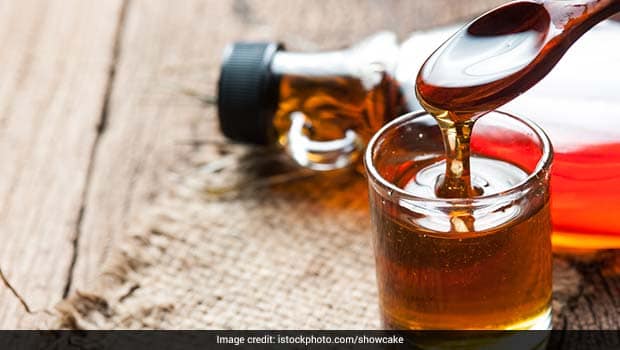 Highlights
Maple syrup, the golden-coloured ingredient has recently been enjoying its outing in the world of health foods. Many regard it one of the healthiest alternatives to regular processed sugar, but is it really that beneficial for our health? Derived from the sap of maple tree which is then boiled to arrive at this naturally sweet substance, maple syrup has long been adorning some of our best loved delicacies like pancakes, waffles, breakfast cereals and a range of desserts.

As per Dorling Kindersley's book Healing Foods, "Recent studies have found it is rich in phenolic compounds, which have anticancer and antibacterial properties, and manganese and zinc, making it a good choice for heart health and boosting men's fertility. In addition, it contains 15 times more calcium than honey, and less sodium".

It is believed that maple syrup consumption, in moderation, may boost health in men. The syrup comes laced with zinc which, "helps support men's reproductive health and protects against prostate enlargement. Its abundant manganese levels also help in the production of sex hormones in both men and women," as mentioned in the book Healing Foods. Zinc and manganese also help in cellular energy production and metabolism. Zinc may also play a role in preventing arterial walls from hardening and ensuring a healthy heart. Maple syrup is now being widely used as a detox agent. When mixed with ingredients like lemon juice or apple cider vinegar, the syrup turns into a health benefiting potion that cleanses the system from within.

- Maple syrup is twice as sweet as regular syrup, therefore just a bit is usually enough to sweeten your meals.

- Maple syrup is rich in polyphenols and antioxidants. 4 tablespoons contain the same amount of antioxidants as a serving of bananas or broccoli.

Avoid falling for the versions available in the stores that are not 100% organic. Many low-cost versions might just simply be corn syrups with a dash of maple flavouring. The colour of the syrup may influence the flavour as well. While light syrups are good for everyday use, in your morning cereal or regular cuppa; darker variants are ideal for making sauces, marinades and while baking. Maple syrup is a fairly versatile ingredient. You can drizzle it atop your salads, blend it in your smoothies and even use it while baking a batch of decadent desserts or cookies. While health experts and fitness enthusiasts stand divided with their opinion on the health-benefiting abilities of maple syrup, it's best to enjoy the goodness of maple syrup in moderation just like any other food.