McDonald's Runs Out of Fries! 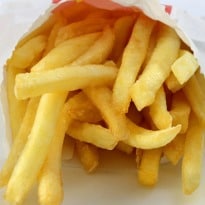 McDonald's in Japan has revealed that it is having to ration french fries, despite more than 1,000 tonnes of potatoes being airlifted, as eateries grapple with a crippling chip shortage.

Industrial disputes on the United States West Coast are crimping exports of french fries, leaving Japanese restaurants scrambling to secure fresh supplies. McDonald's said that it has already flown in tons of potatoes and has an emergency shipment underway via an unusual sea route -- but for now it will only serve small portions of chips.

The Japanese arm of the fast food giant said it has "airlifted more than 1,000 tonnes of potatoes as an emergency measure and also shipped 1,600 tonnes by sea from the US East Coast, but this is not enough to offer a stable supply to customers".

The further said in a statement, "We will temporarily change our product lineup... until a stable supply of potatoes is in sight.It is difficult for us to get potatoes in a sustainable manner due to lagging labour negotiations on the US West Coast." (Worried McDonald's to Trim Menu, Review Ingredients)

Promoted
Listen to the latest songs, only on JioSaavn.com
Dockworkers in the US are reportedly on a go-slow and have not been providing full crews for months in a bid to gain bargaining leverage in labour negotiations with employers, hampering exports to Japan. Earlier this month the operator of the Gusto restaurant chain said it planned to airlift in around 200 tons of french fries to avoid running short.

News of the chip dearth came as a butter shortage in Japan showed signs of easing. For weeks, supermarket shelves were empty, with any new stock disappearing almost as fast as it arrived, despite store-imposed limits of one pack per customer. (Japan's Butter Blues: Of Shortage and Dwindling Dairy Farms)

CommentsThe government stepped in and bought more butter on the international market, as well as encouraging domestic producers to up their output.