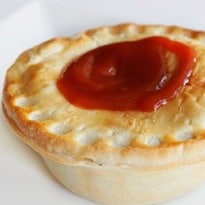 What do you call a seven-course meal in Australia? A pie and a six-pack. Or so the old joke goes. While the nation's standing in gourmet circles continues to climb, the meat pie itself remains as distinctly Australian as ever.

In sport, crossing over for a meat pie is rugby slang for scoring a try. In 1927, guests attending the opening of the old Parliament House in Canberra dined on free meat pies. Sadly, organisers overestimated visitor numbers for the event and were forced to send two truckloads of pies to the nearby tip. The 90 cent stamp issued as part of 1987's Aussie Kids series features a couple of young blokes getting stuck into some "dog's eyes" at the footy. Last year, the Melbourne Cricket Ground sold 300,000 meat pies, the majority unsurprisingly during the AFL season.

While no one country or culture can lay exclusive claim to the pie -history suggests that the Egyptians were the first to discover the joys of filled pastry - it's safe to assume the meat pie, as Australia knows it, is traceable to the first fleet. For dedicated food scholars, Robert Macklin's excellent eBook The Great Australian Pie provides an entertaining, easily digestible summary of the dish's history (and, I might add, for roughly the same price as a decent pie).

Estimates put Australia's annual pie consumption at somewhere between 270m and 300m hand-warmers annually. Like most of my countrymen, I eat most of my yearly 12-pie-quota during footy season, although meat pies aren't my only pastry-and-filling weakness (the custard egg tarts served at dim sum restaurants are a particular Achilles heel).

While most of the pies eaten in Australia are manufactured in commercial factories (Patties, the owners of Four'N Twenty, can produce a staggering 50,000 pies an hour), many bakers throughout the country elect to make their pies in-house. As handy as a pie from the servo might be, it's at institutions like Harry's Cafe de Wheels in Sydney and suburban bakeries like Brighton Bakery in Western Australia where the nation's pie-making talents are best admired.

But that's not to say all pies are created equal. If so, there'd be little need for contests like the Great Aussie Pie Competition. First held in1990 as part of the Sydney International Catering Trade Fair, this annual competition strives to unearth the best pies around the country while simultaneously improving the national standard.

Although the guidelines are aimed at helping commercial bakers produce and sell the best possible pies - "cost your pies and don't be afraid to ask the price" - some of the entry guidelines' advice will also be of use to home cooks, in particular: "check the underside of your product for raw pastry or dirty marks or seeds". Also worth noting is that it's "essential to get the balance right. Marks awarded for pastry-to-meat ratio!"

In addition to the importance of flaky pastry, good quality meat (national food standards require a pie be at least 25% "meat flesh") and flavoursome gravy, tomato sauce is another potential make-or-break factor. Do you squeeze your sauce over your pie at the start (and in what shape?) or do you deploy it bit by bit? Perhaps even more importantly, to store the sauce bottle cold in the fridge or to keep it at room temperature in the pantry? It's a passionate debate regularly played out in living rooms and workplace kitchens across the country. But regardless of how you sauce your pie, this much is certain: every meat pie comes with an unmistakable taste of Australia. Savour it.