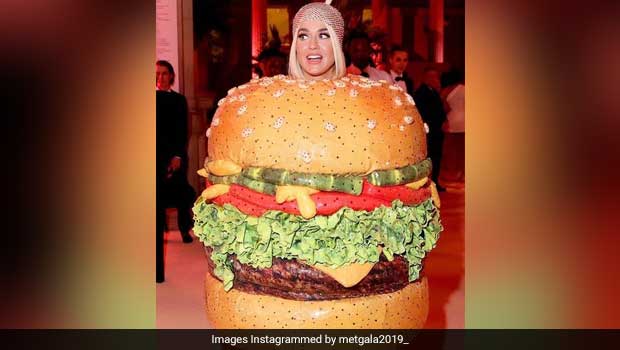 The Metropolitan Museum of Art's annual gala has been making headlines since yesterday. The theme for Met Gala 2019 is 'Camp: Notes of Fashion' and global celebrities have been showing off their best quirky and campy outfits on the pink carpet. Among the most 'campy' costumes spotted at the event were those of Bollywood actor Priyanka Chopra Jonas and her husband Nick Jonas. While Priyanka Chopra pushed the envelope with her quirky look, there were a number of others who also grabbed eyeballs for shattering all levels of fashion convention. Katy Perry, for example, came dressed as a chandelier and just when no one expected it, transitioned into an enticing-looking cheeseburger! Perry's first look was enough to get the internet talking, but when she changed into the cheeseburger, people really started talking.

Katy Perry's cheeseburger outfit made waves on Twitter, where people seem to be obsessed with the attention to detail. Perry paired her absolute snack of an outfit with cheese burger shoes and a cheese burger bag as well. The glittery cheeseburger outfit looked really cumbersome, but Katy Perry was seemingly determined to get people talking and wonderfully pulled off the hilariously 'campy' outfit.

Here are some of the best Twitter reactions to Katy Perry's cheeseburger look from Met Gala 2019:

HOLY SHIT I NEED THESE SHOES

Katy Perry really took off her CHANDELIER met gala iconicness and put this on... I don't know a more committed person. pic.twitter.com/TOhuz9YFiq

FROM LIT TO SNACK.
QUITE LITERALLY
(not that i am complaining)#MetGala#MetGala2019#KatyPerrypic.twitter.com/2GYr78DhcO

me going to MetGala at the same time im hungry :
#MetGala#KatyPerry#MetGala2019pic.twitter.com/JW6qKIWapa

It's safe to assume that Katy Perry's 'delicious' look is going to be the talking point on Twitter for some time. This isn't the first time that Katy Perry has shown some love to junk food. The American pop star is, in fact, quite a fan of wearing food outfits. She has, in the past, been spotted with outfits themed after a wide range of greasy and calorie-loaded foods like pizzas, ice-creams, cotton candy, cakes etc. Katy Perry sure deserves all the brownie points for the idea and the flawless execution!