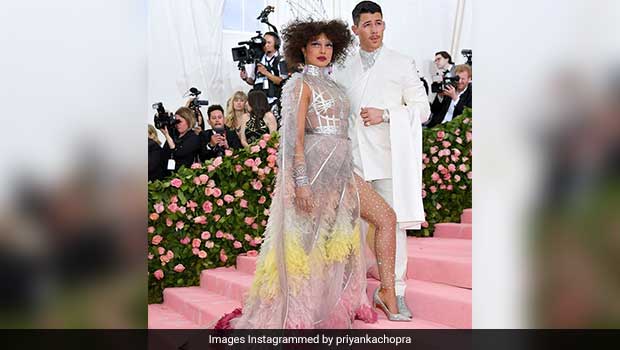 The Metropolitan Museum of Art's Annual Met Gala took place on May 6th, 2019 in New York and pictures from the pink carpet are making waves on the internet. The event that sees the who's who from the entertainment, music and sports industry, makes news every year for a display of quirky fashion statements and outlandish styles. Celebs are seen pushing the envelope with their costumes every year and this year was no different. In keeping with the theme for Met Gala 2019 - Camp: Notes of Fashion - some of the most well-known global faces showed up at the event, dressed in their eccentric best and among the most quirky styles on display were those showcased by Priyanka Chopra Jonas and her husband Nick Jonas.

While Priyanka Chopra grabbed eyeballs with her unconventional look and 'wowed' everyone, she also seemed to be living it up during the event. The 36-year-old diva posted several pictures and videos of her seemingly royal lunch at Met Gala 2019 on her Instagram page and they indicated that PC had a bit of a foodie Gala at the Met Gala, with champagne and caviar for company. We spotted two unopened champagne bottles marked with Priyanka and Nick's names on them. What's more? Even Priyanka's four-legged daughter Diana joined them for a taste of the fancy feast.

Now, that's a spread fit for the regal couple that Nick and Priyanka are. The couple has become the toast of the town, ever since they tied the knot at Taj Umaid Bhawan Palace in Jodhpur, Rajasthan. For the Christian wedding, Priyanka sported a custom-made Ralph Lauren gown with a jaw-dropping gorgeous tulle veil that stretched on for 75 feet!

Also Read: This Dessert At Priyanka Chopra's Bridal Shower Was A Tribute To Nick And Priyanka's Love Story!

Incidentally, the couple had first met when they made an appearance together at the 2017 Met Gala. Now, they're back at the event, making us all swoon with their looks. Seems like this couple is living their best life!