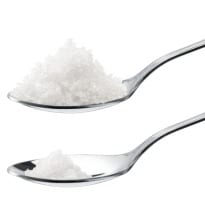 The world's biggest food and drink company is pledging to speed up making hundreds of products with less salt to honor new UN dietary guidelines.

Swiss-based Nestle says further cuts in salt would be made in all its food brands worldwide in keeping with the World Health Organisation's new guideline earlier this year that adults should limit salt intake to no more than five grams per day.

The company's statement today said hundreds of products would be affected, including soups, noodles, recipe mixes, frozen and chilled meals and pizzas in popular brands such as
Maggi, Stouffer's and DiGiorno.

Nestle says it previous efforts "to progressively and continuously reduce the salt in its foods" have already reduced the amount of salt used in its recipes by 14,043 tons
compared to 2005.