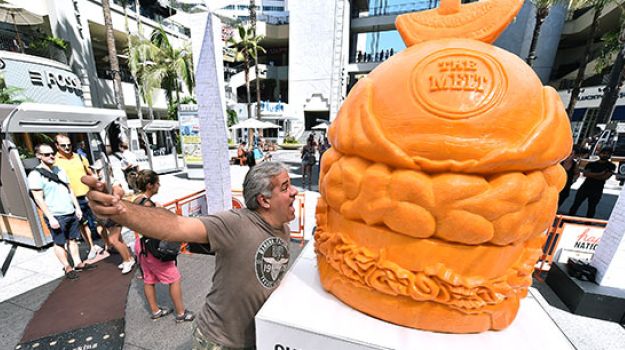 A US restaurant chain has bagged the Guinness World Record for creating the largest cheese sculpture after carving a 45 inches tall cheeseburger that weighed a whopping 691 kg from a hefty block of cheese. Pro cheese carver Troy Landwehr created the edible artwork which measured 114.3 cm (45 in) tall by 96.52 cm (38 in) in diameter out of a 907.2 kg block of aged Wisconsin cheddar.

The final piece weighed a whopping 691.27 kg, breaking the previous record of 419.57 kg that was achieved by Sarah Kaufmann (US) in 2011. Taking over 30 hours to create, the model was shaped
entirely from one block of cheese, with no internal support structure.

Landwehr also moulded a separately-attached pickle which was not included in the closing weigh-in.
The successful attempt by The Melt was made on National Cheeseburger Day, celebrated on September 18 in the US. "As we approached the one-year anniversary of the introduction of cheeseburgers we wanted to pay homage to all things cheesy - and put a smile on our fans' faces - on our favourite holiday by breaking this record.  We're thrilled to say we have accomplished that goal," said Jonathan Kaufman, Founder and CEO of The Melt.

The sculpture was unveiled at Los Angeles' shopping and entertainment complex the Hollywood and Highland Center where official Guinness World Records adjudicator Michael Empiric was in attendance to confirm the record and present a certificate.