Do You Know How to Make Cheese at Home? 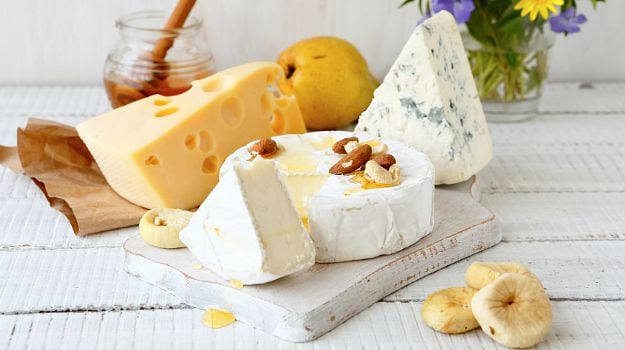 'How to make cheese' is an addictive hobby and one you could seriously get used to.

I love cheese. And I know this because I spend more time browsing the cheese counter at a supermarket than I do at a fashion apparel store. Not a day goes by when I don't think of shaving a side off the fabulous manchego, cheddar or edam sitting in the side of my fridge. Hard, crumbly, chewy - they almost look picturesque in their sealed packets.

As delicious as it is, the process of cheese making can be a real chore. Especially if you're attempting to make the hard ones like cheddar, gouda etc. But the soft ones like mozzarella, cream cheese, ricotta and cottage cheese are actually pretty easy to make. And you'll need the right arsenal though: For cottage cheese and ricotta you need a good batch of raw milk, something acidic like vinegar or lemon juice, salt, a cooking thermometer, cheese cloth and a strainer. If you're feeling ambitious and want to put yourself out there with something like mozzarella then add starter culture and rennet to your shopping list. I tried a few batches of cream cheese myself - watching the milk coagulate and turn into little lumps of heaven, boy was it good. Not only is it delicious but it's also really healthy.

Prateeksh Mehra, owner and founder of Spotted Cow Fromagerie, a Mumbai-based creamery that produces artisanal cheese says "Pick up a packet of mass-produced or processed cheese and read through the label. It has sodium, emulsifiers, stabilisers, preservatives and what not. Cheese isn't supposed to be this unhealthy. It's actually locked with calcium and minerals from milk. "

if you're looking for hand crafted cheese in the market, you'll find plenty of options. Flanders Dairy does all sorts of cheese: gouda, mascarpone, cherry mozzarella, goat cheese etc. The Spotted Cow focuses on soft Italian and French cheese: bombrie, rombay and camembay. Then there's Acres Wild Organic, a 22 acre cheese farm in Tamil Nadu that makes cheddar, haloumi etc. There are more than 1400 kinds of cheese and they differ in shape, size, colour, price and smell. "They start out the same though: boiling, acidifying, pressing, ripening, ageing" says Prateeskh. What makes them different is what kind of milk is used, how long they're cooked, strained, stored, pressed and maturing time.

Research suggests that cheese making dates back to the 8th century, beginning in Greece and working its way to Rome and other European countries. According to Ricki Carroll in the book 'Cheese Making', "Cheese was a staple in biblical times, along with honey, almonds and wine. Apparently, ancient Greeks had a real affinity for cheese. 'Aristaios, a son of Apollo was considered the giver of cheese. Homer sang of cheese in the Odyssey and Greek Olympic athletes trained on a diet consisting mostly of cheese.' When it reached Rome, the Romans added herbs and spices to cheese and also discovered smoked cheese.

In Europe, cheese was made mostly on farms for consumption at home or for local sale. At the time, they lacked a basic understanding of science, at least with regard to cheese, and so the women of Normandy, France found a quick way to make cheese. They coagulated milk with the help of rennet, drained the curd in small molds to form cheese, sprinkled it with salt and then stored it in a damp cellar till the mold grew and developed cheese like characteristics. England too was known for its soft, moisture-based cheeses but through the years, when demand started to go up they shifted to hard, low-moisture cheese that could be transported long distances without spoiling. That's how they adopted more industrial techniques like cooking at high temperatures to produce drier rinded cheese. This technology soon found its way to America and defined the next 300 years or so of cheese making.

In the US, cheese was mostly made on farms, on a small scale till 1850. In 1851, a father and son set up the first industrial cheese manufacturing plant where they churned out cheddar cheese in large quantities. They produced as much as 45,000 kg of cheddar and all of uniform quality. This format took off instantly and by 1860 there were three big cheese manufacturing plants in the United States.

Where All Things Begin: Milk

Sunil Bhu, owner of Flanders Dairy and professional cheese-maker says "The quality of milk you use is at the heart of cheese making. In India a lot of what you eat is adulterated so we're very careful about where we source our milk from, because it can make or break the taste of cheese."

Seven eighth of milk is made of water and one eighth of it is made of protein, fats and minerals. When milk coagulates, water evaporates and what's left is milk solids. These solids are what determine the nature of cheese and they can differ with the animal and breed you choose. The taste of cheese depends a lot on the kind of milk that's used. Goat's milk makes slightly softer and yellow cheese. It's delicate so needs to be cooked at a slightly lower temperature than cow's milk. It also delivers cheese which is lightly pungent and peppery. Sheep's milk has less water and more milk solids which is why it gives a higher yield. So you don't need to use as much rennet or salt.

Pasteurized or Not: Hugh Fearnley-Whittingstall of Guardian suggests that to cook cheese at home you try raw and unpasteurized milk as it's fuller and creamier. But in India, how do you know that it hasn't been contaminated with pathogens? According to David B. Fankhauser, professor of biology and chemistry (https://biology.clc.uc.edu/) you can add calcium chloride to store-bought milk since it's pasteurised. That's because pasteurisation removes calcium from the milk which is required as it aids coagulation and prevents the curd from falling apart on being stirred. Some people also use low-fat milk but it makes a much smaller quantity of cheese and probably not as creamy.

Starter cultures are basically carefully selected bacteria that are used to develop acidity in the milk. This acidity in turn encourages the rennet to coagulate the milk. The whole process is known as ripening. Juliet Harbutt says, "Each bacteria in the culture operates within specific parameters: some work slow, some kick in when the level of acidity has increased and some create holes. Some people also make their own starter from the previous day's milk."

Traditionally, many varieties of cheese were made using rennet, an active ingredient that helps the milk coagulate. In earlier times, rennet was derived from the stomach tissue of a slaughtered calf. But now, most cheese makers use the vegetarian version of rennet which could be made of fig barks or any other plant with coagulating properties. Rennet is used in most kinds of cheese but some fresh cheese like cottage cheese and ricotta can be made without it as well.

The toughest part of cheese making is ageing the cheese. Once you're done boiling, straining and pressing the cheese, it needs to be stored in a warm environment with proper air circulation to age gracefully. How quick or slow it ages depends on the level of humidity in the air, moisture content and salt in the cheese. The type of cheese in question might also age differently in the same environment. For some cheese like cheddar, you also need to create a surface rind to store them in. That's basically a flavourful mold around the cheese which holds it together while it ages, allowing it to create an almost fluid interior with a solid exterior. Certain kinds of French cheese are stored with a sterilised charcoal powder around them.

How to Make Cheese at Home

We've got recipes for the kind of cheese you dream of. Soft, spongy and smooth with a creamy texture and free off stabilizers, chemicals and preservatives. So put on an apron and get yourself some delicious home-made cheese.

It's soft, crumbly and a great ingredient to cook with. You can season it with flakes, salt and pepper and cook it or drop it over a baguette and enjoy that as an evening snack. (Get the recipe here)

This is a yogurt based cheese spread which needs just three ingredients: yogurt, salt and dry mint.

1. Take some yogurt and smoothen it till it's uniform.

2. Add some salt and whisk. Add the mint.

3. Hang this mix in a muslin or cheese cloth and leave for 24 hours.

4. When you pull out the cheese after a day it'll be more like clay and you can roll it out into small balls and leave it in olive oil.

This tastes a lot like paneer and is ridiculously easy-to-make. You can use this in salads, on bread or as a stuffing in ravioli. Grab 2 litres of full cream milk, a cooking thermometer, something acidic like vinegar or lime juice and salt. This should give you about one cup of cheese.

1. Heat the milk to somewhere between 80 to 93 degrees Celsius.

2. While the milk is being heated, put 1/4th a teaspoon of salt.

3. When the milk reaches the right temperature, turn off the heat and add something acidic. 1 tablespoon per lite.

4. Immediately, the milk will start to curdle. Lift the clumpy part and put it in a cheese cloth and strain for an hour at least.

How to store cheese in your fridge: Cheese needs to be stored at a certain temperature and humidity if it has to last longer. So firstly make sure that you wipe the area where you're going to store your cheese with vinegar, wine or some kind of disinfectant. Then place the packets of cheese and make sure to avoid cross contamination. If the cheese starts to dry, then rub it with olive or coconut oil. You can also place half a glass of water in your cheese box to regulate humidity.

Comments(Also see: How to Keep Your Food Fresh Longer)