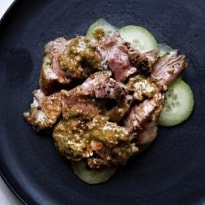 Put 75g of cherry tomatoes in a blender or food processor. Tip a tablespoon of yellow mustard seeds into a shallow pan and fry them, covered with a lid, for a minute or two until they start to crackle and pop. Remove them and tip them into the tomatoes. Pour in five tablespoons of olive oil, 20g of peeled fresh ginger, 10g of basil and a little salt, then blitz to a rough, sloppy paste.

Season two thick lamb steaks with sea salt and black pepper, then grill until nicely charred on each side using a ridged griddle or the oven grill. Keep the inside pink. Leave the lamb to rest for five minutes, then cut it into thick slices. Tip the dressing into a shallow dish or deep plate, add the slices of lamb and toss gently, coating the meat with the tomato and mustard seed dressing. Serve on a bed of salad. Serves 2.

You will probably want the lamb to be nicely browned on the outside and pink within, so oil the meat lightly, season it, place it on a well-heated griddle pan and cook for 4-6 minutes, then turn and cook the other side for slightly less. Alternatively, cook the steaks in a little olive oil and butter in a shallow pan, turning regularly and almost constantly spooning the butter over the meat as it cooks. Leaving the meat to rest (old advice, but so many people don't bother) will keep the meat more juicy inside.

Use a pork or beef steak instead of lamb. Instead of ginger, or perhaps as well, add two cloves of mild, sweet garlic.