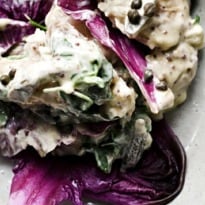 Why relegate new potatoes to a side dish? Give your Jerseys, Charlottes and King Edwards the royal treatment with recipes which take the humble spud to new heights

When it is really good, a potato salad can be worth elevating to main-dish status. By "really good" I mean that the potatoes are creamy-fleshed and earthy, and have been cooked by someone who is fearless with the salt pot. They should be well past al dente, even a little crumbly, and be dressed thoughtfully, imaginatively, and - this is crucial - while they are still warm.

I honestly don't care whether the potato peeler is involved or not. I like both the silky texture of a young, naked spud and the sort of skin-on version that could be politely referred to as rustic. We shouldn't be bullied into peeling our King Edwards if what we fancy is a rough-hewn, gutsy accompaniment to a fat, char-crusted ribeye. Just make sure the other ingredients are in a similar vein: herbs torn instead of finely chopped, and plenty of lip-smarting vinegar in the dressing.

The dressing is just as important as getting the right potato. There is a style of salad that involves diminutive, waxy-fleshed tubers barely as big as a blackbird's egg, fine parsley and tarragon (use only the youngest leaves) and a dressing of mayonnaise that has been given a lactic sharpness with crème fraîche - Charlottes, Jersey Royals and Belle de Fontenay if we are talking varieties. Or an even simpler recipe where, fresh from the pot, they are sliced and tossed with nothing but olive oil and soft, fruity red-wine vinegar.

Large floury-textured potatoes can be wonderful in a salad despite what purists say. The whole "salad potato" thing is a bit of a red herring. At this age, though, they are best peeled and cooked to the point of crumbling before being drained thoroughly then stirred carefully with a mustard-spiked dressing and the generous amount of parsley you would use if you were making a tabbouleh. But, always, the dressing should be applied when the main ingredient is still warm and has just been sliced. That way it will be soaked up more effectively. The dressing needs to get to the heart of the matter.

I like to roast new potatoes for salad, too, and toss them in the dressing so you get a nutty, caramelised quality and a fudgy texture. They're even heartier with some meat involved: slices of sirloin if you are feeling flush, or bits of bacon fried crisp as shattered glass if not. Rabbit, baked with plenty of oil and seasoning, ended up in my salad bowl this week, torn from its bones and mixed with sherry vinegar and a nest of pebble-sized roast Jersey potatoes.

Salad of potato and chicory

The amount of mayonnaise here is the smallest amount you can effectively make in a food mixer. Save half for later.

Wipe or rinse the potatoes, then boil them in deep, generously salted water until they as tender as you wish. They will take about 12-20 minutes, maybe less, depending on their size. For this recipe I cook them a little more than I would usually: 20-25 minutes.

Make the dressing by putting the egg yolks in a bowl, adding a pinch of salt and then slowly adding the oil, the briefest trickle at first, beating all the time, then a bit faster, until you have a thick mayonnaise. Add the lemon juice and a little finely ground black pepper

Stir the honey and mustard into half of the mayonnaise, putting the other half away. Slice the cornichons in half lengthways, then stir, together with the rinsed capers, into the mayonnaise, and season to your taste.

Remove and discard the toughest of the watercress stems, then pick over the leaves, keeping the freshest. Wash and tear the chicory into large pieces. Drain the potatoes, then, using the back of a spoon, press down lightly on each potato to crack it open.

Drop the potatoes into the dressing, mixing gently, so they soak up as much of the dressing as possible, then add the torn chicory leaves and the watercress.

This is one of those dressings made using the cooking juices - this time from roasting a rabbit and potatoes with olive oil. You could use chicken thighs and drumsticks if you prefer.

Set the oven at 180C/gas mark 4. Rinse or wipe the potatoes, then halve or quarter them depending on size and put them in a roasting tin. Place the rabbit pieces with them, then trickle over the oil, season generously and roast for about 30 minutes until golden, giving the rabbit and potatoes the occasional turn.

Peel the cucumber lightly, slice it in half down its length, then scrape out the seeds. Cut into thick slices.

Remove the rabbit from the tin and remove the flesh from the bones, tearing into bite-sized pieces. Transfer the potatoes and rabbit to a mixing bowl. Put the roasting tin over a moderate heat and pour in the sherry vinegar. Scrape at any crusted-on pan juices and stir into the vinegar, then pour over the rabbit and potatoes, toss gently and serve warm with the sliced cucumber.

Photo: Nigel Slater: 'The potatoes should be well past al dente, and dressed thoughtfully, imaginatively...' Pictured: his salad of potato and chicory. Photograph: Jonathan Lovekin for the Observer