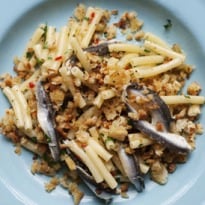 Boil 150g of mini penne pasta until al dente, then drain. In a large nonstick pan, cook a couple of handful of breadcrumbs in a little olive oil until golden, then remove. Add 50g of butter, a chopped red chilli and then, 30 seconds later, the juice of half a lemon. Add 100g of marinated anchovy fillets, a large handful of roughly chopped parsley and then the browned breadcrumbs and drained penne. Toss briefly. Serves 2.

Marinated anchovies are the pale, silvery fillets you can buy from the deli counter or in a jar. They add piquancy rather than the simple salty hit of a classic little brown anchovy fillet in oil. Look out for mini penne, like the large tube pasta we know so well, but more appropriate here because of its diminutive size.

Serious anchovy lovers should try anchovy fillets bottled in oil. Or, back with the marinated anchovies, toss them with stoned and chopped black olives, red and yellow cherry tomatoes, mozzarella, leaves broken from a tight little gem lettuce. Blitz a couple of large handfuls of basil leaves in 4 tbsp of olive oil, then warm in a frying pan. Add small chunks of torn-up ciabatta or baguette to the pan, letting them soak up the basil oil as they crisp. Toss them over the salad with a glug or two of olive oil.

'Mini penne is appropriate here because of its diminutive size': Nigel Slater's penne with marinated anchovies. Photograph: Jonathan Lovekin for the Observer