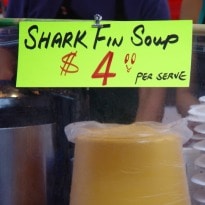 Shark fin soup, that exotic but pricey delicacy said to boost sexual potency and prevent heart disease, is going off menus in some Singapore hotels and restaurants in an effort to save sharks which face extinction from overfishing.

The fins of an adult shark can only feed five people and many small sharks are killed every day to meet the growing demand.

This is not restricted to just shark fins. Many hotels and restaurants have also taken off their menus other such endangered species like Chilean sea bass and blue/yellow fin tuna.

To encourage customers to hold shark fin-free wedding banquets, luxury resort Capella Singapore is giving wedding couples free accommodation of one night and a certificate of acknowledgement for their contribution to conservation.

However, experts say this is just a drop in the proverbial ocean. It is a multi-million dollar industry globally.

"Shark fin soup is erroneously associated with prosperity and good health. The tradition of serving shark fin soup began as a dish served only to the emperors and their guests in China. But then it became a delicacy and is a must in all high-end wedding parties and other functions in Singapore," Michael Ma, hotelier and environmentalist, told IANS.Michael heads the famous IndoChine group that has several resorts and restaurants in Singapore, Thailand, Indonesia and Germany.

He is spearheading a no shark fin soup policy since 1999 in his resorts and restaurants.

"Wedding banquets make a third of our business but we lose out to other competitors as we don't serve shark fin soups, but no regrets. I am a professional diver and the Philippines used to be a shark alley but now you don't get to see them; so I know these small steps can help in spreading awareness and protecting the fish known as lion of the sea," said Michael.

For the last 10 years, IndoChine has been running the Green Festival.

This year's event kicked off Nov 22 with the Marine Conservation Forum - a discussion on shark conservation held along with the International Union for the Conservation of Nature (IUCN) and NGO Shark Savers.

The event will also see the 'Go Green Dance Party' with artists from Singapore performing at an IndoChine property. It will be followed by a wine and cheese evening with a screening of Rob Stewart's award-winning movie "Sharkwater".

The event ends Nov 28 with the annual gala dinner 'I'm FINished with FINS'.

There will also be a charity auction and the proceeds will go towards helping reduce the demand for shark fin soup to protect sharks from being driven to extinction.

"While having a festival may not exactly be a purist's idea of going green, I do think it's a commendable effort to bring awareness of conservation to high society folks who may not otherwise have much time to think about green issues with so many other priorities in their busy lives," said Michael, who has attended several UN climate change conferences.

"The Maldives has banned shark fishing, realising the importance of the fish, and other countries should follow suit," Saikia told IANS.

"Sharks are vital to the health of marine ecosystems and yet all 14 species most prevalent in the shark fin trade are now at the risk of extinction," he said.