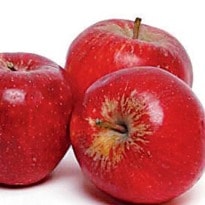 Imagine biting into an apple that tastes like a fizzy drink. Science has opened up the doors to turn that flight of imagination into reality by creating a new range of  genetically modified apples that will well up your mouth with a fizzy sensation!

The Paradis Sparkling Apple is the first of its kind in the world. A Swiss firm Lubera takes away the credit to arrive at this novel discovery by cross breeding an East German apple specimen - Resi - with another variety known called Pirouette.

Robert Maierhofer, Production Manager at Lubera, confirmed that it took years to perfect the texture of this new breed of apples. He adds,  "It has a soft texture but a heavy crunch and very big cells that open up in the mouth, releasing a lot of acidity and sugar that gives you a feeling of having a fizzy drink,"

The Lubera's website describes their product as follows, "An apple is an apple. But not in this case. Our new breeding Paradis Sparkling® is different. So different, just as the name describes: Sparkling® explodes in your mouth. When the large cells release their juice, it feels as if CO2 is brought into play. To stay with the analogy: Paradis Sparkling® is the first apple that is not 'still', but 'sparkling'!"

Listen to the latest songs, only on JioSaavn.com
Maierhofer further explains that one could only experience the fizzy sensation on biting into the fruit and not by merely pressing it. According to him, once we take a bite of fruit, its huge cells discharge tingling juices in your mouth that feels similar to fizzy drinks. The Sparkling Apple saplings are up for sale at 34 pounds.Inputs from PTI and ANI