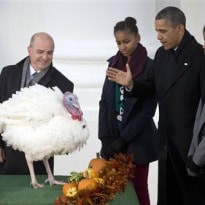 President Barack Obama spared two turkeys from the oven Wednesday, fulfilling the annual tradition of a presidential pardon for a couple of lucky birds ahead of the American harvest holiday of Thanksgiving Day.

Obama pardoned Popcorn, who shared the stage with the president on the North Portico of the White House on a cold, drizzly day. An alternate turkey, named Caramel, also received a pardon, though it did not have the benefit of a face-to-beak meeting with the president.

"The office of the presidency, the most powerful position in the world, brings with it many awesome and solemn responsibilities," Obama began. "This is not one of them.

The two turkeys, 38-pound (17- kilogram) gobblers hatched the same day were each up for top billing as the national Thanksgiving turkey. After an online White House crowdsourcing election, Popcorn won.

The event is usually an opportunity for droll commentary by the president and the kind of inside detail that the White House rarely shares with reporters.

Popcorn, the White House said, likes to feed on corn and strut to Beyonce's "Halo," while Caramel prefers soybean meal and Lady Gaga.

Popcorn's victory, Obama said, proves "that even a turkey with a funny name can find a place in politics."

As for Caramel, "he's sticking around and he's already busy raising money for his next campaign," the president said.

Presidents have spared turkeys off and on as far back as the Lincoln era, according to the White House. The first official pardon was granted by President George H.W. Bush.Later Wednesday, Obama, wife Michelle, daughters Malia and Sasha, and mother-in-law Marian Robinson volunteered at a local charity -- the Capitol Area Food Bank -- distributing bags of sweet potatoes, onions, carrots, apples and small white boxes of the presidential M&Ms.

Obama said the family also planned to deliver a couple of turkeys to the food bank -- these, not spared.