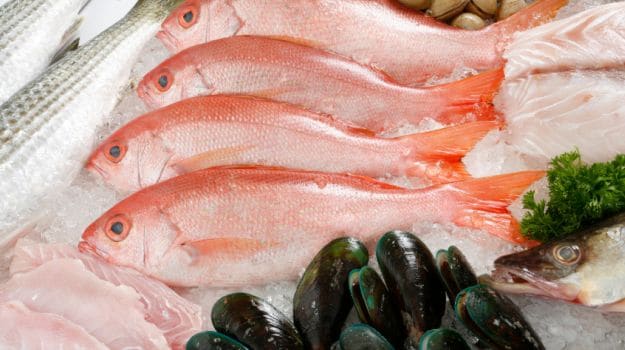 A seafood lunch in Hong Kong is enjoyed by locals and visitors alike, but with threatened species on the menu and fishing practices that endanger marine life, campaigners want to change the city's appetite.

Hong Kong is the second-largest consumer of seafood per capita in Asia - an average resident consumes 71.2 kilos (157 pounds) of seafood each year, more than four times the global average, according to the World Wide Fund for Nature Hong Kong.
Yet the city of seven million has been forced to become one of the biggest seafood importers in the world as local waters are depleted of fish stocks.

Whether in high-end restaurants or waterside eateries, seafood is ubiquitous in the southern Chinese city, where customers often choose their fish live from a tank.
Baked lobster with noodles in cheese and deep-fried prawns in salted egg yolk are among local favourites.

(Forage for a Seashore Feast)

But a "fish tank index" compiled by WWF Hong Kong found that more than 50 percent of the species available in the city's traditional restaurant tanks were from "highly unsustainable" sources.

"Overfishing is driving the collapse of the world's ocean fish stocks and edging many types of fish towards extinction, yet they are still on our menus. Hong Kong has a special responsibility to turn the tide as one of the biggest consumers of seafood," WWF Hong Kong conservation director Gavin Edwards told AFP.

(Mercury in Seafood Can Trigger Autoimmunity Disorder in Women)

The WWF has launched a new online seafood guide for Hong Kong detailing which types are deemed unsustainable. It also recently held a "Sustainable Seafood Week" asking restaurants to provide ocean-friendly options. But there is still a long way to go to change consumer habits.

(Seafood Labels and Sourcing to Become Clearer Thanks to New Code)

Visiting Hong Kong for a post-graduation trip, Japanese student Ted Machizawa, 22, has just finished lunch in the coastal town of Sai Kung, famous for its seafood. He says he had no idea whether his meal - steamed grouper and shrimps - could pose a threat to the ocean.

"We're just trying to see what it's like here. We are probably not too keen on knowing what kind of fish it is," he said, sitting metres away from tanks packed with live crabs and reef fish.

Hong Konger Janice Fung said restaurants rarely gave information on sourcing. "If you go to an expensive restaurant or a specialised seafood shop they might tell you. Otherwise the information is not comprehensive," she said as she waited for a meal at Cafe Deco on the city's famous Peak, which serves a wide range of seafood.

"If you tell me what I am eating is not sustainable I will try to avoid it," she added.

Cafe Deco has opted to provide an alternative sustainable menu as part of the WWF push - shunning the controversial delicacy shark fin, for example.

"You can't necessarily tell the difference (in flavour)... if you don't use shark fin to make dumplings," senior chef William Chang told AFP as he put the finishing touches to ocean trout-stuffed ravioli, a dish on the sustainable menu.

(Fishy tales from 'God's own country')

Chang says restaurants should "take the first step" to change people's eating habits. Some suppliers are also trying to help. Banker-turned-fish farmer Mark Kwok hopes that by farming groupers, which are on the decline in the ocean, he can help stem the crisis. His farm in the northern hillside town of Yuen Long was accredited as sustainable by the WWF in 2013.

"We have about 35,000 fish. Even if you were to eat all of them, it wouldn't make a dent in the ecosystem because these are farmed fish that have never seen the ocean," he told AFP.

Environmentalists in the Philippines say stocks of grouper are dwindling near the island of Palawan, a major source for Hong Kong.

"We have fishermen who say they used to catch them near the coast. But now, they have to go further out to the sea," said Melo Ponce De Leon, spokeswoman of the government's Palawan Council for Sustainable Development.

Change is the Answer

Some Hong Kong restaurateurs worry that changing their menus would dent their incomes.

"Many of our customers are from mainland China and they want to get something they have never seen before," says Ng Wai-lun, one of the owners of Chuen Kee Seafood Restaurant on Sai Kung's promenade.

Promoted
Listen to the latest songs, only on JioSaavn.com
"They like to pick the colourful ones... or something caught fresh from the wild," said Ng, pointing out a tank of humphead wrasse and groupers. Ng says he would have to scrap 70 percent of the menu to make it ocean-friendly, something he fears would drive customers away. But campaigners say progress has been made.

"We found in a recent survey that 80 percent of customers would not buy unsustainable seafood if they knew it was unsustainable," says Edwards.

Comments"There is more awareness, but we still have much further to go."