Palak Paneer to Tandoori - Indian Food a Hit in Helsinki 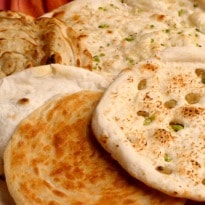 When one thinks of this Land of the Midnight Sun, the first thing that comes to one's mind is reindeer meat. But this capital city of Finland boasts of at least two dozen Indian restaurants that serve mouth-watering palak paneer,chole-naan, kadi-pakora, butter chicken and other delicacies.

How come Indian food is a major hit with the Finns?

"People love Indian food here. From dal to curries to nans, you name it. It is very popular here," Rumon Rehman, a Bangladeshi national, who works in Namaskaar, told IANS. Namaskaar is among the first Indian restaurants that opened here.

Much has changed since then.

This city of one million people now has a Gandi, Maharaja, Samrat, Indian Taj and Mount Everest, to name just a few. But one interesting thing is most of these restaurants are run by either Nepalese or Bangladeshis.

Rasul claimed Namaskaar was first started with the help of an Indian and it soon became synonymous with authentic Indian food. Seeing its success, others took its franchise and opened new ones with the same name.

A walk down the capital city, known for its lakes and islands, reveals many Indian-sounding names of restaurants. It is easy to see their popularity with the Finns as well as with the international expat community. And the beautiful summer drives them to these roadside restaurants for what locals consider exotic cuisine.

"We love the breads and the lovely spicy curries. Basically, I love Indian food. They have so much to offer in both the vegetarian and non-vegetarian menu," Helina, a college student, told a visiting IANS correspondent.

She said India and its rich cultural tradition also created a buzz among them to try out Indian food.

"People here know about India. Some of my friends have been to India. I hope I also get a chance soon. My aim is to taste the hottest curry possible so I can boast about it," Helina said.

Keeping the tastes of the local people in mind, the Indian palate is milder. Apart from Indian food, restaurants also offer a wide variety of South Asian delicacies from Nepal, Pakistan and Bangladesh.

Rehman said apart from the natives loving the Indian spread, many Indians - either traveling or working in this Nordic country - make a beeline for their restaurants.

"Indians are always hunting for Indian food and if you are a vegetarian, then the chances are greater. I have met so many (Indians) in the past years. They are so happy to see an Indian restaurant in a far away land," he added.

Aware of the popularity of Indian food, Finnair, which operates direct flights to Helsinki six days a week from New Delhi, tries to provide authentic food.

"Indian meals are made at Finncatering where they follow Indian recipes. We know Indians are particular about their food; that's why we change our menu every four weeks," said Saksela Marjaana, Service Manager, Intercontinental flights Inflight Customer Service.

Food is serious business for them and that's why they flew their chef to India to know what Indians love.

"When our flights to Delhi started in 2006, we had Indian chefs coming over and teaching our chefs how to prepare Indian food," Marjaana told IANS.

Promoted
Listen to the latest songs, only on JioSaavn.com
She said their executive chef Juha Stenholm and his colleagues also visited India on a learning trip and learned from the local catering company about the Indian culinary world.

From dal makhani, green peas pulao and paneer labadar to dal tadka and spicy lentils, the customers - especially the vegetarians - are given a wide variety to choose from.

Comments"Indian food has become quite popular internationally. We just try to bring the authentic taste to our customers," Marjaana added.