Ever Wondered Why North Indian Food Is So Spicy? Here's The Answer 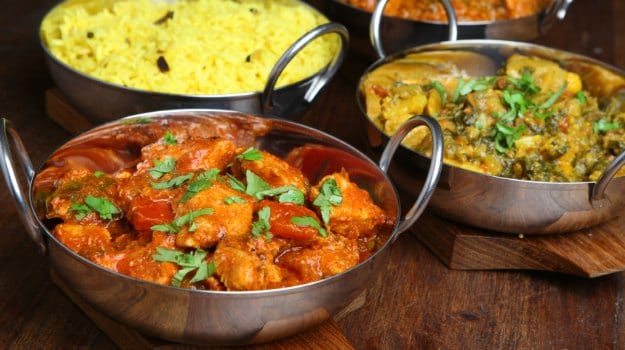 North Indian cuisine is one the world's most spicy cuisines. North Indian food, as we know it today, was born out of the fusion of the Indian cuisine and Persian food that the Mughal rulers brought with them. The first Mughal emperor, Babur, did not live long enough to establish a royal cuisine that would be synonymous to his name someday. However, he did establish the tradition of hiring Indian chefs to prepare Persian dishes out of local ingredients. The temperature of Babur's homeland and northern India was not the same, and that was a big problem. India was much hotter and the food would soon go bad. The solution? Spice it up! It has been scientifically proven that spices prevent our food from spoilage and thus, north Indian foods tend to be so spicy. Bacteria and foodborne pathogens cannot survive in a hot environment, which is provided by spices. Countries with a hotter climate have comparatively spicy cuisine.

Another important element of north Indian food is oil and butter. Although it serves a similar purpose (preventing food from spoilage), its use was started much later. The legend holds it that Shah Jahan, the Mughal emperor, consulted all his ministers before moving the Mughal capital from Agra to Delhi. However, he did not consult his health minister. After moving to the new capital, the emperor found out that main source of water, Yamuna, was much polluted in Delhi as compared to Agra. So, in order to prevent the food from waterborne pathogens and bacteria, excessive oil had to be used.

Now, although times have changed and medical sciences have advanced, it is not necessary for us to eat such spicy food. However, it has become a genetic habit.

North Indian cuisine is one the world's most spicy cuisines

Here are a few spices and their effects on bacteria:

Today, Indian cuisine is one of the most famous cuisines in the world, with restaurants, outlets and chains all over the world. It has evolved and fused with many other cuisines and techniques of the culinary world to produce many gastronomic delicacies.