Quinoa, Espresso and Bruschetta: The Foods Getting Your Tongue in a Twist 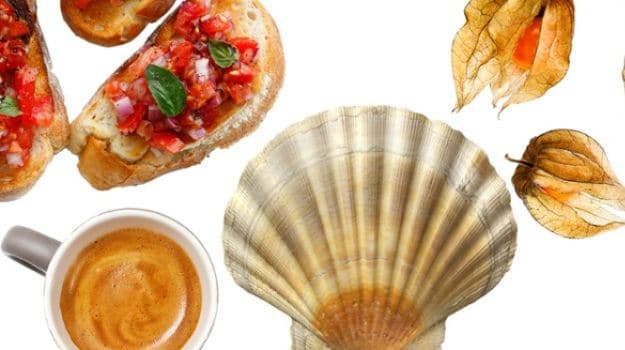 Bruschetta, espresso, scallops and physalis are getting diners’ tongues in a twist. Photograph: Getty Images

Getting knees mixed up with your gnocchi? Even food buffs such as Hugh Fearnley-Whittingstall and Jay Rayner trip up over unpronounceable eats that, in one fell swoop, can brand you an unsophisticated hick or a pretentious pedant

I could feel my face burning. Was my coffee too hot? Nope – I’d just been smirked at for ordering an “ex-presso”. My only comfort was that I am far from alone. Last month, the US version of the Cambridge Dictionary was ridiculed for posting an audio link suggesting Parmesan should be pronounced “pen-sal-vane-ear” – yep, Pennsylvania. The internet is awash with blogposts on culinary mispronunciations. For example, the food site Epicurious.com tried to offer a handy list of the 30 most commonly mispronounced words last year, only for the comments to be filled with people claiming several were wrong. I expect fierce debate will ensue below the line of this feature, too.

It’s hardly surprising when menus these days are such a tongue-twisting minefield; our tastes might be global, but our language skills are struggling to catch up. Even those who work in the food industry stumble over some terms. River Cottage chef Hugh Fearnley-Whittingstall reassures me. “I say ‘ex-presso’,” he says. “I get most of these words wrong. I don’t mind,” he tells me, stoutly. “When quinoa first cropped up 10 years ago, I assumed it was ‘kwin-oa’. Other people can call it ‘keen-wa’ – good luck to them – but I won’t be joining in.” There is one example that makes him furious. “There is a guy I know in the food business who likes the finer things in life,” he tells me. “He calls truffles ‘troofles’. In France, a truffle is a ‘truffe’, but that doesn’t mean in English you pronounce them ‘troofles’. I blame myself that I have never confronted him – but I don’t trust myself. He might try to defend it and I would lose it.”

Italian chef Giorgio Locatelli, on the other hand, says mistakes are likely to leave him chuckling. “People say ‘gee-nocchi’ instead of ‘nyocchi’ and, in Italian, that means ‘knees’. That’s fantastic.” But he does have a pet hate – when people say ‘bruschetta’ with a soft ‘shh’ (which I think a fairly easy mistake to make).“That is the one that kills me,” he complains, as I make a mental note never to do this again. “‘Sch’ in Italian is pronounced ‘sk’, so it should be ‘broo-sket-ta’,” he continues. “If I was with a friend, I would correct them, because I would always want people to correct my English.”

The problem is, even if your pronunciation is perfect, that doesn’t mean you will escape being chastised, as Guardian restaurant critic Marina O’Loughlin points out. “An actual conversation with a waiter I had recently went like this: Me: ‘I’ll have the broosketta.’ Waiter: ‘One brooshetta, then.’ Me: ‘Yes, the broosketta’. Waiter, kindly, pityingly: ‘Brooshetta it is.’”

Food writer Felicity Cloake has suffered similarly. “It’s not often that I’m lucky enough to be offered Moët & Chandon,” she says. “But since learning that the correct way to pronounce it is with a hard ‘t’ (mo-wett), I tend to avoid saying the name at all, because people often gently repeat it back to me as ‘mo-way’, as if I’m some unsophisticated hick who needs saving from myself.” It’s a middle-class dilemma that has her stumped, she says. “Where do you go from there – copy them to spare their blushes, or carry on regardless?”

Guardian columnist Zoe Williams, who writes restaurant reviews, has the opposite problem. “I remember when I realised ‘scallop’ was pronounced ‘scollop’ – it gave me a real anxiety. When you know one thing is wrong and one is right, you will never get them the right way round. Then I hated myself for caring, because it’s obviously just a posh thing.”

But she says there is something about the way the English approach foreign languages that escalates the awkwardness. “It’s that unique English pretence of not being pretentious: people who pronounce ‘Ami du Chambertin’ in perfect French accents are considered despicable, and people who pronounce it wrong are even worse, so you just say ‘that cheese’.” The whole thing is so exhausting that she suggests – only half-jokingly – that we should just return to ordering things by numbers.

Luckily, when you are the one who runs the restaurant, you can make sure the menu only has easy-to-say words on it – which is an approach championed by Fergus Henderson, the founder of St John restaurant. He is happy to confess that there are words he stumbles on. “‘Physalis’ I struggle with – I can barely remember the name, let alone pronounce it,” he tells me. “Mind you, it’s one of those ingredients that turns up on plates where it’s not needed, so it can be safely ignored.” So, what should you do if you are faced with an unpronounceable word? Henderson insists it’s best to “just steam in”, but that, if you think you could really offend someone with your pronunciation, there are ways around it.

“I find that the best course of action is to mumble. If you go to China, for instance, and there is an egg-fried rice that looks like it is called ‘fuck you’, just mumble.”

And if this sounds like an unlikely situation, it’s one that food writer Jay Rayner can relate to. “In a restaurant on holiday, in Normandy, I ordered tripe in the local ‘Caen’ style, using my best terrible French,” he says.

“The waitress sniggered. A French friend leaned across the table and said: ‘You just asked for your tripe to be cooked in the style of a chronic masturbator.’

“I’m still not quite sure what I mispronounced.”

When the Mexican fast-food chain came to the UK, it helped the British out with an advertising campaign teaching the correct pronunciation of its name, derived from the Nahuatl for a smoked and dried jalapeño chili pepper. Which you say as “chee-poat-lay”.

Pho
There’s still much debate over the correct pronunciation of this fragrant noodle dish, which originated in Hanoi. Some say the recipe came about under French colonial rule, therefore the name should be pronounced with a long “o”, but the consensus is “fuh”.

Edamame
When these immature soya beans crossed over from east-Asian cuisine to stud salads in your local M&S, it led to a spate of mispronunciations. “Ed-a-mah-meh” is correct.

Sriracha
The hottest sauce to hit your table in the past few years, this fruity number now graces supermarket aisles and burger chains alike, but people are still saying it wrong. “See-ratch-a”’ is what you want. And plenty of it.

Poutine
This squeakily sublime Quebec dish of fries, cheese curds and gravy is generally agreed to be pronounced something like the Russian president’s surname – so, “poot-in”. Still, many outraged fans are adamant it’s “poo-teen”, while others insist on “pu-h-tahn”, which sounds similar to the French for “prostitute” (putain). A case for mumbling and pointing, perhaps.