Ramadan in Iraq: The Sweets That Break the Fast 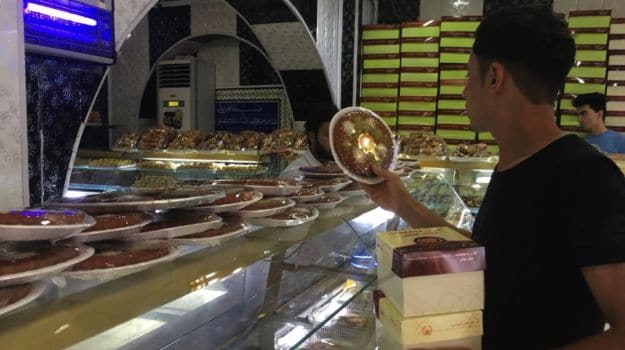 Tuesday marked the first day of Ramadan for many here, and Iraqis scrambled to purchase their favorite treats as the daylong fast came to an end. Empty streets suddenly became congested. There was a rush for local juice shops and sweets vendors and fruit stands to pick up last-minute items. After going hours without food and water, people's tempers seemed almost ready to flare in the final moments before iftar, the meal that officially breaks the fast. The month-long Islamic holiday is a test of willpower and especially faith, many observers here will tell you. It's a reminder for Muslims of the importance of family and what life is like for the less fortunate, they might also say.

And for many, it's also about food - especially the sugary variety. And when it comes to Iraqis, no foods seem as sweet and tasty as specialty Ramadan juices and pastries. "Juice is the Iraqi specialty for Ramadan!" says Abdulkarim Razouqi, co-owner of Mishmish. The shop, located in Baghdad's downtown Karrada district, sells seven varieties of juices for the holy month. Mishmish, which means "apricot" in Arabic, is a busy place because it's practically an institution. It's been open in the Iraqi capital, in one location or another, for a half-century. "Old, old, old, old," says Razouqi.

Arrayed before him in colorful plastic bags were the juices, which cost about $3 per bag. (They prefer selling juice in bags instead of jugs because, he says, bags are easier to carry around.) The most popular variety is pomegranate, he says, because of its taste and health benefits. There's also grape and lemon and another called tamer hindi, a type of date juice.

For Shiite Muslims, who form the majority in Iraq, Tuesday was the first day of Ramadan. For Sunnis, it was Monday. Like many things in Iraq, the followers of the two branches of Islam rarely agree on the exact start of the holy month, which begins with the spotting of the crescent moon. Their squabbles have torn the country apart. But both seem to agree on the importance of good juice, as well as tasty pastries, such as baklava or dhatleh, which is a doughnut-like edible that is doused in a viscous layer of pure sugar.

"People need energy after they've been fasting all day, so they prefer sweet pastries, because it's full of energy," said Saeid Younnes. He's the manager of Malek Lubnan, located near Karrada. The popular sweets shop translates as the "King of Lebanon," which Younnes points out: "There's no king of Lebanon!" (The tiny country is a republic with a president as head of state, and even that position has been vacant since 2014 because of political squabbles.) But Malek Lubnan is certainly the king of sweets, at least for many in Baghdad. It's popular, probably because of its large variety of baklavas, sweetened breads called "kaak" in Arabic, and, of course, dhatleh. "We're popular because we're popular. I don't know why. But on Ramadan, people come here," he explained. As he spoke, people indeed entered his shop, stocking up on what will mark the beginning of a month of satisfying evenings of sugary drinks and treats.