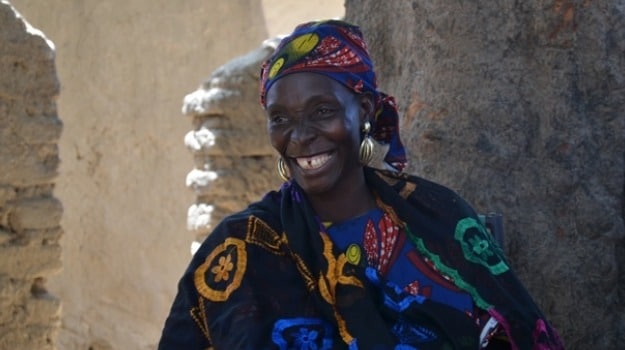 “We need to take care of our babies even before they are born. It’s like when you want to have good cotton, you need to fertilise the soil to nourish the seeds for a good yield.” Assa Kayentoo uses a language that she knows her audience in rural Mali will understand.

Kayentoo, a rare example of a divorced financially independent woman bringing up two children on her own, works for the Malian NGO Amassa in Koutiala, southern Mali. She is part of the An Be Jigi initiative (An Be Jigi means “hope for all” in the local Bambara language) which has been educating women on nutrition and changing cooking habits over the last eight years.

Related: Cash from cassava: better breeds of the staple will boost development

“I need to visually explain the facts about nutrition to women,” says Kayentoo, referencing the fact that less than a third of adult women are literate in Mali. “I describe proteins like the bricks needed to build a house – without proteins a child won’t grow.”

Oral and visual nutrition education is followed by a communal cookery class with this week’s menu of protein-rich peanut and amaranth sauce, iron and vitamin C-rich soumbala (made from nere seeds) and wholegrain sorghum porridge, tô.

Fighting child malnutrition in this Sahelian region is a daunting task, with over 28% of under-five children stunted despite south Mali being the grain basket of the country. Malnutrition is especially widespread among young children in rural areas. Anaemia is particularly severe, and iron deficiency is a common, damaging child health and stunting development.

Another nutrition leader, Aminata Sanogo, is trying to start a culinary revolution. She cooks her tô with wholegrain sorghum in a society where women are expected to grind the grain to separate the bran. Social stigma is a barrier to change as eating grain with bran has traditionally indicated the family is so poor that they have to eat whatever they can. Bran is meant for livestock and only eaten in the lean season if people are starving.

But, the nutritional value of traditional meals like tô is higher with wholegrain, about half the mineral content of grain is lost when the bran is removed. Eating wholegrain not only means better nutrition but also frees up time for women and girls – they don’t have to pound away at the grain in a mortar for hours. Sanogo has also been teaching women to cook sorghum and millet grains with it with protein-rich legumes like cowpea.

So far 290 people have participated in nutrition field schools (94% women) and about 600 households have benefited from collective demonstrations. The consumption of wholegrain sorghum increased from seven (baseline household consumption survey) to 96 in six targeted villages.

Sorghum and millet are climate-resilient cereals that are crucial staple foods in the rural Malian diet, providing three quarters of the total energy intake of mothers. Yet, while cereals provide about half of the iron intake and up to 75% of zinc intake, the total consumption of these essential minerals is far below international recommendations for child health and development.

But wholegrain cereals isn’t the only answer. Bran is rich in phytates, which inhibit the absorption of iron and zinc in the body. However, this can be countered through food preparation methods like soaking the grain overnight before milling and by fortifying the food using locally available vitamin C-rich ingredients, such as tamarind or baobab fruit, which significantly increase iron and zinc uptake. Combining these measures could help increase iron uptake in children by over 50%.

Sanogo’s lessons include other health advice. Women participating in the lessons are more likely to practice exclusive breastfeeding, which increased from 20 to 89% and pregnant women increase their attendance at the health centre. Some women have also convinced their husbands to give them individual plots where they now produce cowpea, groundnut and new sorghum varieties for family consumption.

Women from villages 10km away now ask Sanogo to organise cookery sessions. Despite not being paid she says she the sessions give her maaya-juru – a boost to her social network, which is highly valued in Bambara culture.

Harnessing the maaya-juru of women like Sanogo to teach nutrition could be a real turning point for health in Mali – finally giving children the best start in life.

Jerome Bossuet is a consultant in agricultural research for development. He writes about on his French blog Innover contre la faim.

Aminata Sanogo isn’t paid for teaching nutrition in south Mali’s villages, but she is happy to do so for the maaya-juru (boost to her social life). Photograph: Jerome Bossuet