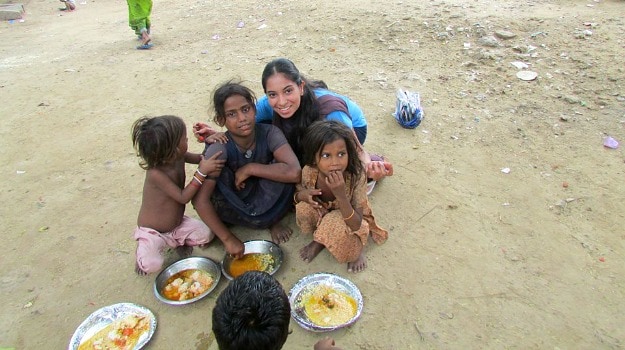 "My mother always told me that you should never take shortcuts, but the one time I did, it changed my life."

This was Bani Kolhi's opening statement from her first INK talk in Mumbai last year. Bani is a 17-year-old, incredibly confident and the founder of Jai Jan, an NGO which helps deliver leftover food from high-end restaurants to the underprivileged living in government-run shelters and on the streets of Delhi.

The shortcut she refers to was the one she took when she left a restaurant through its back door. "I was at a food event organised by Lite Bite Foods when I saw waiters walking back to the kitchen with leftover food. I asked one of them what they were going to do with so much leftover food and was told that as it would be thrown away. Then it dawned on me - what if I could just pack it up and hand it to those who struggle to find a single meal a day."

It can be hard to believe that there is a 'hunger crisis' in a country when there is so much food. The problem is that a large part of it goes to waste. The Emerson Food and Wastage report pegs India's food wastage at Rs.44,000 crores. While some of it is due to lack of storage facilities, a lot of it comes from restaurants.

Bani decided to bridge this gap between food that was about to be tossed out and those that need it most. Driven by passion and purpose, she wanted to help restaurants put what they don't use, to good use. She requested Mr. Amit Burman, Chairman of Lite Bite Foods if she could get all the leftover food from the event and distribute it to the poor. "He was not only delighted with the idea, but was also extremely supportive" said Bani.

What comes to most of us just as a fleeting thought, appeared to this 16 year-old as an opportunity. An opportunity to attend to a specific social need and to do some good in the world. That's how she kick-started 'Jai Jan'. The tagline of her NGO 'Jai Jan' reads 'the hunger resolute' which means determined towards fighting hunger. But it stands for much more. What it really means is that lessons learned and best practices are opportunities waiting at your doorstep.

According to a 2013 report by United Nations Food and Agricultural Organization, 17% of Indians are too undernourished to lead a productive life. In fact, one in every three malnourished children in the world lives in India. Around 46 % of all children below the age of three are too small for their age, 47 % are underweight and and many of them, severely malnourished.

'One-third of Indian women are underweight'

Feeding the bellies of those who need it most is what keeps Bani motivated. "We feed 80-100 people every night. These are people for whom the idea of 'sleeping on an empty stomach' isn't an exaggeration, it's reality" said Bani.

One of Jai Jan's biggest donors, Mr.Amit Burman, Chairman of Lite Bite Foods has played an important role in its success. Food from four of his most popular restaurants - Fresco, Asia 7, Zambar and Punjab Grill hand over leftovers from dinner to Jai Jan volunteers every night. These volunteers then venture out in the streets daily and distribute it. "The leftover vegetarian food from our buffet is sent directly from the restaurants and delivered within 2 to 3 hours" said Mr.Amit.

Jai Jan also works with other restaurants and NGO's through the city. Bani feels that partnerships work best when they give you the wiggle room to do more than your mission statement. "Last year my school (The American Embassy School) and the American Embassy pledged to pay respect to the victims of the 9/11 blast. Jai Jan volunteers along with 50 embassy employees and other Delhi-based NGO's distributed food to over 400 people in Delhi" said Bani.

The 2014 Global Hunger Index (GHI), puts India at rank 55, out of 76 hungriest Asian countries. It is ahead of Bangladesh and Pakistan, but behind Nepal and Sri Lanka. In the wake of such shocking statistics, Jai Jan and other NGO's of a similar nature prove that a little more is right with the world.

According to a report from the Central Institute of Post-Harvest Engineering and Technology (CIPHET), 18% of the country's fruits and vegetable production is wasted annually. Leftover food that's thrown away only adds to this figure and a few people estimate this number to be as high as 40 %. (Hunger situation improves in India: Global report)

When asked about the future of Jai Jan, Bani commented, "We started out 3 years ago at a shelter in Munirka and now we deliver food across pretty much the entire city. Our focus is to try and keep getting more restaurants on board, more volunteers and feed as many bellies as possible. It's pretty much a win for everyone involved."

She added, "There is no doubt Jai Jan has helped feed thousands in Delhi, but we still have a long way to go."