Revved-Up Runner Bean Recipes for Beginners | Back to Basics 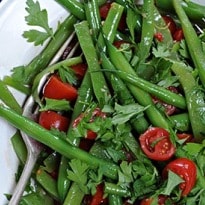 Runner beans may have fallen out of fashion since their 1970s heyday, but they still taste great - especially when paired with their French cousins

When I was a child, almost every summer meal was served with jade-green runner beans, delicately cut into long, thin strands and boiled so that they collapsed gently as they lay over each other in the bowl, glistening from melted butter and a squeeze of lemon.

Despite their American ancestry - they were brought to this country by Charles I's well-travelled gardener John Tradescant -runner beans were, by the 1970s, as intrinsic to the English summer as cricket, space hoppers and picket lines.

Alas, the runner bean has since fallen on hard times. Some time in the 1980s, a triumvirate of sexier greener beans elbowed our old friend out of the culinary limelight. French beans, mangetout and sugar snaps were sweeter, smoother and easier to prepare. The humble runner couldn't compete.

The good news is, there's a comeback under way. I think this might be because more people are growing their own vegetables, and runner beans make a reliable and thrillingly bounteous harvest. If you have a garden, however small, plant a beanstalk: you'll soon see why they are the stuff of fairytales.

You'll probably find some of your beans grow ridiculously huge, the length of a baby's arm. The bigger the bean, the more fibrous the "strings" that run down their sides. Unless you like the sensation of chewing on green dental floss, you'll need to trim these strings away. Take a small paring knife and run it all the way down both sides, lopping off the ends while you're at it.

Of course, you don't need to grow your own to enjoy the bounty. There's a glut of beans at this time of year, so all the shops and supermarkets are brimming with them. And to show that there are no hard feelings, this week's recipes pair the doughty British runner with its seductive French counterpart. (You can, of course, use either bean on its own if you're not ready to make the peace.)

1 Top and tail the French beans and cut the strings from the runner beans, then thinly slice them diagonally.

3 Quickly add the rest of the ingredients including the beans and water.

4 Stir well and turn the heat up for 5 minutes, then cover the pan, turn the heat to low and leave for another 5 minutes. The beans should be tender and coated with the sauce. Season well and serve.

Tagliatelle with potatoes, beans and pesto

Traditionally, pesto is used as a sauce with tagliatelle, cooked with thinly sliced potatoes and French beans. Recipe serves 4.

3 Cook 400g pasta in salted water as directed on the packet. When it has 8 minutes left to cook, add the potatoes and beans.

4 Drain, leaving a little of the pasta water. Stir in 2-3 tsp pesto vigorously. Season and serve.

(From Riverford Everyday and Sunday)

2 Place all the ingredients in a large roasting tray, except the coriander leaves. Roast together for 30 minutes until slightly caramelised. Blitz in a food processor and season well.

3 Toss cooked French and runner beans in the dressing and sprinkle with coriander.

Beans with anchovy, tomato and chilli

1 Gently cook a few cloves of crushed garlic in olive oil for a 2-3 minutes: don't let it brown.

2 Add 1 chopped red chilli and a few anchovy fillets. Remove from the heat and stir well, until the anchovies dissolve into the oil.

3 Cook 150g each of prepared French and runner beans in boiling salted water. Drain well and add to the anchovy mix while still hot. Season well.

4 Cool to room temperature. Add 200g halved cherry tomatoes and some chopped parsley. Flaked salt cod can also be added to this salad.

2 Melt some butter in a large pan. Toss in the drained beans and season well. Add 2-3 tsp finely grated parmesan and fontina (or gruyere), fold through, cover and leave for a few minutes before serving.

1 Top and tail the runner beans, then slice them into thin strips lengthways.

2 Make a sauce by cooking finely diced red peppers with chopped rosemary and garlic in a little olive oil. Add a little double cream and bring up to the boil. Remove from the heat and add thinly sliced smoked salmon trimmings.

3 Cook tagliatelle as instructed on the packet. Five minutes before it is ready, add the prepped beans and cook until the pasta is ready. Drain and toss in the smoked salmon pepper cream. Season and finish with grated parmesan.

Beans with tarragon and cream

1 Mix some chopped shallots with chopped tarragon and a little double cream. Toss with hot beans. Add a squeeze of lemon juice. Season and serve.
Henry Dimbleby is co-founder of the natural fast-food restaurant chain Leon (@henry_leon). Get your kids cooking at cook5.co.uk Recipes by Jane Baxter.

This week's recipes pair the doughty British runner with its seductive French counterpart. Photography: Jill Mead for the Guardian.

Indian Cooking Tips: These Quick And Easy Corn Kebabs Can Be Your Favourite Tea-Time Snack
Watch: How To Make Oats Uttapam For A Healthy And Wholesome Breakfast