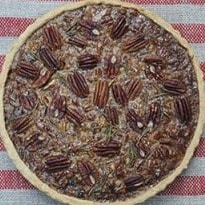 A powerful herb with the capacity to bulldoze all other flavours, rosemary can also be subtle and sensual. Here are two recipes - one American, one Italian - deploying it to perfection

Rosemary is a herb full of romance and symbolism; its heady scent, its mythological link to Aphrodite, its Mediterranean roots, even its etymology (it's said that the Virgin Mary turned the flowers blue). But it also needs to be handled with care; if not used sparingly, the aromatics of rosemary become astringent and take on more than a hint of floor cleaner. The oil contained in the needle-like leaves will, if released, overpower everything except for the most robust flavours in your dish.

When used with care and in moderation, however, rosemary can transform even the most everyday meal into something heavenly. It's wiser to leave the needles intact, allowing the aroma to slowly permeate the dish. My recipes for the pecan pie and farinata below both work on this principle, steeping the rosemary in hot syrup or oil to gently draw out the fragrance.

Pecan pie was always fascinating to me as one of those strange, exotic, distinctly American confections. The fresh rosemary here might seem an unlikely addition to a dessert, but its aromatic depth sits very nicely with the butteriness of the toasted pecans.

1 Rub the butter into the flour using your fingertips until no large visible flakes of it remain. Use swift motions and lift the flour and butter up from the bowl as you crumb them together, so the heat of your hands doesn't soften the butter. Stir in the sugar and salt. Lightly beat the egg in a separate bowl, then pour it into the dry mixture. Using a butter knife, cut through the mixture to combine the wet and dry ingredients. You'll notice that it begins to come together in clumps. Once combined, quickly and lightly use your hands to press the clumps into a ball of dough. Flatten slightly, wrap in clingfilm and let the dough chill for 30 minutes or so.

2 Meanwhile, make the filling. Combine the sugar, golden syrup, butter, vanilla extract and salt in a saucepan over a very low heat. Add two of the rosemary sprigs (leave them whole) and bring just to the boil. Simmer for 1 minute then turn off the heat and leave the rosemary to steep in the sugar as it cools. The longer it sits, the stronger the flavour will be.

3 Roll the pastry into a circle a little larger than a 25cm-diameter tart or flan dish. It helps to roll on a piece of floured baking parchment to prevent the pastry sticking to the work surface and makes it easier to transfer to the tin. Line the tin with the pastry, patching up any holes or cracks with offcuts. Gently press the pastry into the fluted sides and push just above the edges of the tin, so that the pastry stands proud of the rim by a few millimetres. Chill for 30 minutes.

4 Preheat the oven to 180C/350F/gas mark 4. Toast the pecans for 10 minutes on an oven tray, then roughly chop three-quarters of the nuts, leaving the rest whole. Remove the rosemary from the sugar, then lightly beat in the eggs. Add the chopped pecans. Pour the filling into the pastry case and scatter the whole pecans on top. Strip the needles off the remaining sprig of rosemary and sprinkle on top of the pie. Bake for 45 minutes.

This Italian flatbread-pancake hybrid is traditionally baked in an open oven, much like a pizza, but unless you have a big cast-iron pan, I'd recommend just cooking these on the hob. The chickpea flour, also called gram flour, gives them a wonderful nutty flavour - you can usually find it in large supermarkets or Asian food stores. These are best eaten still warm from the pan.

1 In a small saucepan over a medium-low heat, cook the olive oil, garlic and the leaves from two rosemary sprigs until the garlic is sizzling. Take the pan off the heat and leave to cool. If it sits around for a while, even better - the flavour from the rosemary and garlic will have longer to infuse.

2 Combine the chickpea flour, salt and pepper in a large bowl. Strain in the infused oil through a sieve (discarding the rosemary leaves and garlic), and add a little of the water. Stir to combine, then add the remaining water gradually until the mixture slackens to the consistency of a thick batter.

3 Heat some olive oil in a frying pan until hot. Spoon in enough of the batter to coat the bottom of the pan. While the upper surface of the bread is still wet, sprinkle on a few rosemary leaves from the remaining sprig. Once the upper surface has set (this won't take more than a minute or two) flip the pancake and cook for a further couple of minutes, or until golden brown in patches.

4 Repeat until all the remaining batter has been used, making sure that the pan is well‑oiled each time.

Photo: Rosemary lifts a pecan pie, but don't overdo it... Photography: Jill Mead for the Guardian