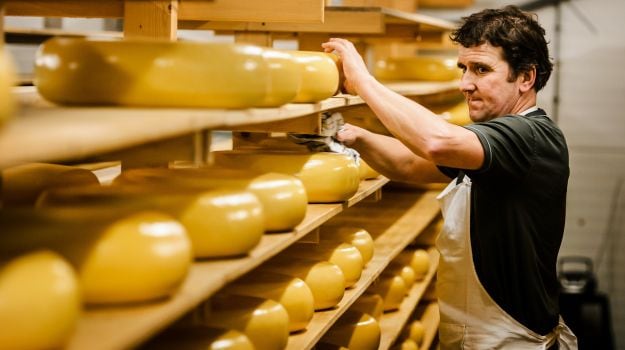 When Russian President Vladimir Putin banned most food imports from Europe in 2014, Russian dairy farmers rejoiced as deliveries of French and Italian cheeses ceased. Now, they believed, they could compete. Since then they've tried to duplicate all sorts of famous varieties, from Camembert to Emmenthal. But one global delicacy remains largely beyond reach, a product of rich milk, know-how, and at least 18 months of aging.

"It would be like winning the Olympics," said Oleg Sirota, an entrepreneur turned cheesemaker so enchanted with the idea that he named his new creamery "Russky Parmesan," or Russian Parmesan. Then, in a slight at competitors substituting palm oil for real milk, he added: "It's hard to win without doping."

Cheese is more than just cheese in Russia these days. For travelers carrying up to five kilograms, or 11 pounds, of permitted "zapreshyonka" - contraband - back from European vacations, it is a defiant, smelly reminder of Russians' adoption of European tastes in recent years despite a deepening political conflict with the West.

"We aren't afraid of sanctions," goes the conservative battle-cry, repeated by Prime Minister Dmitry Medvedev and printed on patriotic T-shirts, but some upscale restaurants and cheese-importing websites are still doing a brisk, quiet business in European goudas and cheddars (all at a healthy markup).

For Sirota, a stout 28-year-old with the wispy beard common among Russian Orthodox believers, cheese is a symbol of national revival, and sanctions are his gospel. An agronomist by education, he was running an IT business with 30 employees when Russian troops quietly seized control of Crimea in February 2014.

He had wanted to travel to Crimea, then east Ukraine, as a volunteer to fight in the conflict there but "got scared," he said. When Putin signed counter-sanctions against the European Union and the United States in August 2014, calling on Russian farmers to make the country self-sufficient, Sirota saw a chance to make his patriotic contribution. He sold his IT business and cars, borrowed money from family members and cut a deal with the Moscow regional government to rent discounted land.
"I felt this call to the land, back to farming," Sirota said over a cup of instant coffee at his farm. Asked if he was motivated by patriotism, he said it was "more like revanchism."

"We should overcome," he said. "When you pressure Russians, even with something like cheese, we only become stronger."

Sirota had always wanted to be a farmer, but as long as he could remember, Russia's villages had been in decline. As a teenager, he helped exhume the missing bodies of Soviet and Nazi war dead near the village of Rzhev, a site of German encirclement in 1942.

The villages "were like zombieland," he said. "No one was there."

On the first anniversary of the sanctions, Sirota opened Russian Parmesan for business, installing a plaque in honor of the sanctions and hoisting the flag of Novorossiya, the separatist regions of southeast Ukraine, out front. Sirota is saving the first wheel of cheese he made for Putin, a man he once protested for helping Russia join the World Trade Organization. In 2012, he brought a cow to an opposition demonstration to voice his anger.

"Without sanctions we would not exist," Sirota said. And if sanctions are repealed, he added, he'll have to close down.

For now, there is no Parmesan at Russian Parmesan, but there is his version of a Swiss Emmenthal, and Gorgonzola, and plenty of yogurt topped with sweet jams, the farm's best seller. The problems are legion: It is hard to get a steady supply of milk in Russia, so Sirota wants to buy his own cows. During the lean winter months, he came close to bankruptcy.

Still, the ravenous market for fresh cheese was evident this summer when thousands of gourmets and curious shoppers descended on Sirota's farm for a festival dedicated to the second anniversary of Russia's food import sanctions. Sirota, who expected no more than a few hundred visitors and only takes pre-orders, sold out until October.

Reactions were mixed. One customer made a wry face as she tried a slice of Gubernsky, Sirota's signature cheese named in honor of the regional governor. Then she shrugged. "It's a bit salty, but you can eat it," said Larissa Fomenko, a former accountant now living on a pension. Sirota said it "goes with everything," including vodka.

His farm sells as much as two tons, or more, a month, he said.

Farms such as Sirota's are still only "a drop in the bucket," said John Kopiski, a former London coal and steel trader who moved to Russia in 1992 and has since married, taken citizenship and opened a dairy farm in the Vladimir region, about 80 miles east of Moscow. Russians know him as the British expat farmer who quizzed Putin on the price of milk during a call-in show last year. While supportive of Putin, he also has demanded agricultural reform and said Russian farms need more government support to become competitive.

The problem with Parmesan is that it takes a large supply of milk, about five gallons per wheel, according to Kopiski, and enough spare capital not to go bankrupt while the cheese is aging. One of the big problems for Russian dairy farmers is the lack of cheap credit, he said, adding that while sanctions would help the dairy industry, they would not alone save it.

Kopiski has created new names for his cheeses, such as "Red October" and "Tovarishch," or "Comrade," to help market them against Western cheeses, particularly if the sanctions end.
"We'll be able to make a Russian Parmesan," he said, adding that it would take time and taste different.

"I would call my Parmesan, 'Johnezan,' " he mused.

Russian, Belarusan and foreign creameries, including from South America, are making up the 300,000-ton per year cheese deficit left by sanctions, said Andrei Danilenko, chairman of Russia's National Association of Milk Producers, which has studied the market.

Most Russian cheese, sold in blocks, is bland and, to Western tastes, a bit rubbery. High-end cheeses account for only 2 to 3 percent of the market, Danilenko said.

"It's still not the full variety that was coming through Europe, but slowly but surely they're replacing those cheeses," he said. "They need experience, number one, and number two the Russian consumer psychologically being ready to accept that good cheeses can be produced domestically."

Sitting at her dining-room table in Moscow, Katya Parkhomenko, a liberal journalist, recalled the strange path that brought her family into the cheese business. An immaculate Camembert, slightly stale but nonetheless gooey and moldy, lay on a blue-and-white checkered tablecloth in a spacious kitchen overlooking Moscow's Novy Arbat.

If Sirota's entrance into the cheese market was an embrace of the political zeitgeist, then hers was the opposite, an escape. After the annexation of Crimea, Parkhomenko, now 58, traveled to Israel and contemplated emigration but found she was "too old to change my identity."

In Israel, she met a computer engineer making goat cheese. "It was soft, great," she recalled and decided to try it at home.

She and her brother Dmitry researched online and began making Camembert in May 2015 from their dacha in the Kostroma region, several hundred miles from Moscow, where the Parkhomenkos have spent their summers since her childhood.

"I've been going for 40 years, and everything is the same as when you were a child," she said. "The river is the same, the bridge is the same, the mushrooms in the forest are the same. In my other life, I have changed really everything. And this is the place where I come to find what I really need in life."
"And now we're making cheese there," she added, laughing.

Parkhomenko sells about 440 pounds each month, largely through Facebook, but also to some elite restaurants, promoted by a positive story in a Moscow lifestyle magazine: "How Moscow's intelligentsia learned to make the tastiest Camembert."

"We have three kinds of customers," she said."They are people who want organic products, connoisseurs (there aren't many of them), and friends."

Promoted
Listen to the latest songs, only on JioSaavn.com
Food sanctions have helped, she said, although the possibility of their reversal hardly keeps her up at night. Her only help from the government has been "getting the French cheese off the shelves." Hardly pro-Putin, there is still a note of patriotism, the kind rooted to land and country and not its leaders, in her thinking.

"Russia could be a food power really, but it isn't," she said. "Why not try?"