Sea Spaghetti in the Supermarket: the Unstoppable Rise of Seaweed 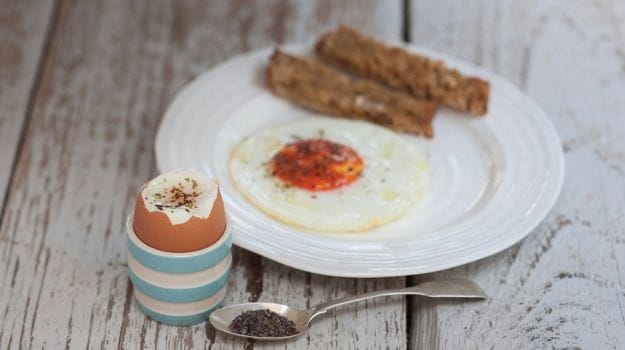 From dulse and gutweed to purple laver and carrageen, seaweed can still seem a little alien in the kitchen, but it can be a boon to all kinds of cooking. Here is our guide to what types to use, and where to get them.

What’s slimy, a bit smelly, and all the rage in fashionable kitchens? Seaweed. Touted as “the new kale”, it’s popping up everywhere, from restaurant menus – with crab, cucumber and dill at Kitty Fisher’s; hake and pak choi at Grain Store in King’s Cross, and in butter at The Sportsman in Kent – to, as of this week, Tesco’s veg aisle. On Monday, the chain became the first major supermarket to stock fresh, edible seaweed, selling 80g punnets of tagliatelle-like sea spaghetti, harvested on the Cornish coast, for £2.

A growing number of specialists are now offering sustainably-sourced algae. One of the earliest on the scene was Just Seaweed, run by Iain Mckellar, a former truck driver, on the Isle of Bute since 2007. In the past few years he has been joined by Edinburgh-based Mara Seaweed, which harvests at four locations in East Neuk of Fife and Argyll, The Cornish Seaweed Company, harvesting on behalf of Tesco, and Atlantic Kitchen, which imports seaweed from Ireland, France and Spain. Business, apparently, is booming: Mara Seaweed, whose packs of smoky-flavoured dulse, umami-rich kombu and a salty-sweet “shony” blend are available from Ocado, saw demand increase 73% in the last quarter of 2014. It is hoping to triple sales in 2015.

Of course, there’s a long tradition of using seaweed in British cooking. It is said to have been introduced by the Vikings; by the 1600s, laverbread had become established in Welsh cuisine. And yet today, despite being hailed for its health benefits, it can still feel a little alien in the kitchen. For many, our experience of it begins and ends with the nori sheets used to wrap sushi. But perhaps it’s time to change that. “It adds spark to dishes – a fresh, sea flavour,” says Grain Store’s Bruno Loubet, who uses Atlantic Kitchen’s range. “It is an amazing source of goodness. It’s full of calcium, vitamins and minerals.” “It has that savoury flavour we all love,” agrees Stephen Harris, chef proprietor of The Sportsman. “It’s like bass in music – it gives a broad bottom end to your food.”

It is also available locally, in abundance: UK waters hold more than 600 varieties. Broadly speaking, they can be categorised into red, green and brown algae. Dulse is red; the milder sea lettuce and gutweed – often used for Chinese fried seaweed – are green. Kombu and sea spaghetti are brown. It can be used fresh, but unless you’re foraging for your own, this can be harder to come by; Mckellar sells it online, and says the brown varieties last up to three weeks in the fridge, the green and red a week. But it also works well dried, either as is, or rehydrated in fresh water.

So where to begin? A good start, says Harris, would be to make a beurre aux algues to go with fish dishes. He favours sea lettuce and gutweed for his, drying it for 72 hours before grinding it and adding it to homemade butter. Andy Appleton, head chef at Fifteen Cornwall, is another seaweed butter fan; he uses The Cornish Seaweed Company’s Sea Salad mix for his. He has also served tagliatelle with sea spaghetti tossed through it – cooked, like dry pasta, in boiling water – and made pasta dough with dried, finely ground dulse folded in. “You get that subtle taste of the sea – it’s not salty, but it’s there.”

At Moro, Samuel and Samantha Clark add seaweeds to salads and rice. “We try to be very seasonal, so it’s a great way, in these slightly barren months, to add a little colour and texture,” says Samuel. He recommends crumbling dried, toasted sea spaghetti over paella, and is a fan of fresh or rehydrated sea lettuce in seafood salads: “It gives a lovely sort of iodine-y, sea taste which is really pretty unique.”

Its use need not be limited to seafood dishes. The smoky richness of dulse has been compared to bacon. Ruth Dronfield, co-founder of Atlantic Kitchen, adds it dried to tomato sauces, soups and stews, while Tim Van Berkel, of The Cornish Seaweed Company, sprinkles it into vegetable curries just before serving. McKellar throws salty, robust bladderwrack into stir-fries. Nor is it just for savoury cooking. Mara Seaweed’s Fiona Houston sprinkles shony over porridge – it contains sugar kelp, which gives a gentle sweetness. Paul Hollywood adds it to apple and blackberry crumble.

And, of course, seaweed can simply be eaten as a vegetable side dish, though Appleton warns that this might be an acquired taste: “We found it hard to do as an alternative green. Say in a fish dish with some potatoes and cavolo nero – we tried to replace it with a seaweed, but it was too strong.” Still, seaweed salads are a staple in Japanese cuisine. Daniele Codini, of London’s Yashin Ocean House, recommends using fresh or rehydrated sea lettuce to make a salad with cucumbers, avocado and edamame.

In the summer, Tesco plans to expand its line to include dulse – which Marks and Spencer also stocks, in the form of Mara’s dried flakes. And Atlantic Kitchen have created a range of seaweed-based soups. So will 2015 be the year seaweed goes mainstream? Dronfield certainly hopes so: “We want to get to a place where seaweed is just a daily part of your diet. It’s not a special ingredient.”

What to cook and how

Sea Lettuce: Leafy and sorrel-like, it can be added fresh or rehydrated to salads, or dried and used in butter to accompany fish dishes.

Gutweed: Bright green with tubular fronts, it can be fried to create Chinese crispy salad.

Dulse: Maroon-coloured with a smoky, meaty flavour when dried, it can be included stews and soups for added depth. Dronfield suggests toasting flakes in a pan, then crushing and sprinkling over nuts or hummus.

Carrageen: Varying in colour from a purple-red to yellow, it’s primarily used as a thickener and setting agent in everything from panna cotta to seafood mousses. It can also be used to flavour beer.

Related: Are seaweed snacks the future as the tide turns on meat consumption?

Sea spaghetti: Relatively mild, this makes a good addition to pasta dishes, and could even be a gluten-free substitute to pasta. Andy Appleton recommends deep-frying it, fresh or rehydrated and lightly coated in semolina, to use as a garnish for fish dishes.

Kombu: With thick, dark green leaves and a savoury, umami flavour, kombu is an essential ingredient in Japanese dashi stock. The Cornish Seaweed Company recommends turning dried flakes into crisps by soaking them and baking them in the oven, or using them in pesto.

Channel wrack: Also known as channelled wrack, this is green and sprig-like. McKellar suggests blanching it and serving it as a vegetable accompaniment to meat. Tom Kitchen has a recipe for poached turbot with saffron broth and channel wrack, while Loubet includes it in a recipe for seaweed butter.

Bladderwrack: So-called because of the bulbous “bladders” that run along its dark green leaves, it can be added to stocks or stews – or, Mckellar suggests, stir-fries.