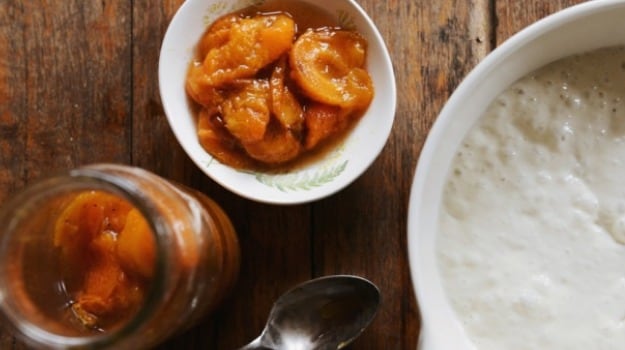 Fluffy crumpets are best to capture the juices of tart stewed apricots and fresh ricotta.

Apricots are a stone fruit, a relative of the nectarine, peach and cherry. At the market, avoid soft-fleshed apricots and instead look for those that are firm to the touch, with a slight give. The fruit ranges in colour from pale yellow to a bright orange, but the vibrancy of the colour is not necessarily an indication of the vibrancy of the flavour. The most reliable way to choose a good apricot is simply to taste one, as they can be floury or insipid. A good greengrocer should allow you to try one.

As they are difficult to transport without spoiling, apricots have traditionally been dried, or made into jams or relishes. A homemade apricot jam, flavoured with the kernel, is one of the joys of winter. Spreading preserved golden summer flavours on a thick piece of toasted rye bread on a freezing morning is a wonderful thing. The quality of your jam relies on the quality of your fruit, so don’t be tempted to use overripe or spoiled fruit.

The tartness of the apricot pairs nicely with yoghurt or cream. These crumpets would be delicious served with a spoonful of creme fraiche or fresh ricotta. This crumpet mix has to prove for 3 hours, but it is well worth the wait, producing fluffy, labyrinthine crumpets that catch the beautiful juice of the stewed apricots.

For the vanilla stewed apricots (makes one jar):

Bring the water, lemon and sugar to the boil and cook until the sugar is dissolved. Place the vanilla in the syrup and the apricots cut-side facing up in one layer, in a heavy bottomed pan. Turn the heat down and cook the apricots until they start to relax and become soft, but aren’t falling apart. Remove the apricots and place carefully in a jar/bowl to cool. Some apricots might cook quicker than others so remove them as they are cooked. Once they are all out of the pan leave the syrup to cool, and when it is cool to the touch, pour over the apricots. Cover until ready to serve.

(Adapted from the Ritz-Carlton Cookbook, 1968)

(A slug of warm water to end)

Warm the milk, water and oil on the stovetop (do not boil), add the sugar and stir to dissolve. Add the yeast to the milk mixture and leave covered in a warm place until frothy (it may not froth as much as usual because of the oil). Sift flour and salt into a clean baking tray and warm in a low oven for 10 minutes. Transfer flour and salt to a warm bowl and make a well in the centre. Stir the yeast mixture in and beat energetically for five minutes, trying to get as much air into the mixture as possible. Cover the bowl and leave at room temperature for two hours, until the surface of the mixture is bubbled. Dissolve the bicarbonate of soda in 2-3 tbsp of warm water and stir energetically into the batter. Cover the bowl again and leave for another hour.

Lightly grease a heavy bottomed frying pan. Cook crumpets in greased crumpet rings 7.5–10cm wide or add a spoonful to the pan freeform. Cook the crumpets very gently for 10 minutes until the surface becomes pitted with holes. Flip the crumpet and cook for just a couple of minutes on this side, until golden.

Eat immediately, or they are excellent the next day popped into the toaster.

NB If your first crumpet isn’t holey enough, add a slug of warm water to the rest of the batter and stir.