The Chennai Express actor was given a warm welcome and was presented a Rajputana sword, a traditional pagdi and a garland. 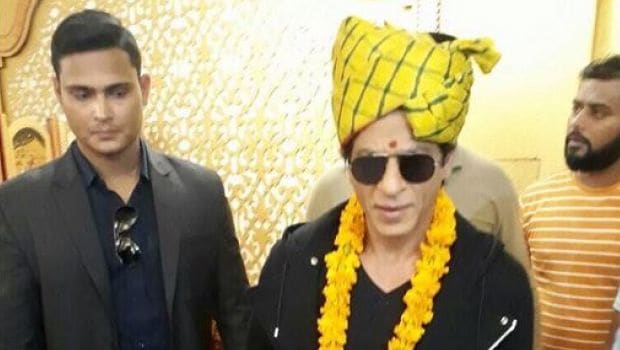 Highlights
Image was posted on Instagram by Red Chillies Entertainment

Bollywood's Badshaah, Shah Rukh Khan, is currently on a promotional spree for his upcoming Imtiaz Ali project, 'Jab Harry Met Sejal'. The actor was recently in Jaipur for a promotional event and was caught relishing traditional Rajasthani thali at a popular restaurant. As the Raaes star enjoyed Dal Baati for the first time, he couldn't help but share, "I had just heard of Dal Baati. It's fantastic and really nice. I wonder how people finish this food. It's really filling and very tasty. For me, it's a first-time experience. Now, I will come here once in three months at least," IANS reported.

Red Chillies Entertainment captured King Khan's foodie avatar and instagrammed it a day ago on their official handle. "Harry's tour continues with the royal taste of Rajasthan! It's time for some Dal Baati & a plate full of delicacies," said the social media post.

The land of Rajputs is known for its rich culture and lip-smacking food. Dal baati churma is the star of Rajasthani cuisine and an absolute must eat on your trip to Rajasthan. Some of the other notable Rajasthani delicacies include Lal Maas, Gatte ki Sabzi, Kairi Curry among others.

The Chennai Express actor was given a warm welcome and was presented with a Rajputana sword, a traditional pagdi and a garland. Shah Rukh looked dapper in an all black attire and a traditional Rajasthani pagdi.