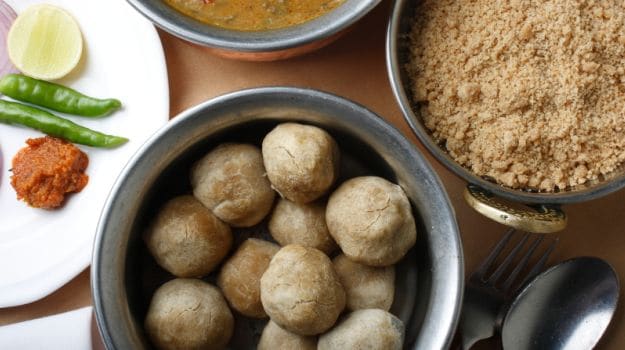 Way before Pokeman and Harry Potter, there was a generation of Indians who had grown up on Amar Chitra Katha comics.

I belong to that generation.

As a child, I spent hours engrossed in the tales from Indian mythology and history told by the late Uncle Pai in his Amar Chitra Katha series of illustrative books. One of the most exciting set of stories was that of the Rajputs of Rajasthan and their stories of adventure and valour. Years later I went to Jaipur in Rajasthan on work. I was interested in seeing the forts of course, but I wanted to discover the local food scene too.

The day we landed we went to a fifty year old place called Santosh Bhojonalaya near the Jaipur bus stop and joined the locals in having a dish called dal bati  churma. The smiling elderly waiter explained that we must crush the round wheat flour-based balls (bati), add the dal (lentils) to them, douse this with ghee (which made my city-bred weight conscious lady colleague cringe) and eat it. This was to be followed by the churma (a mix of crushed bati) and sugar. I was won over by the multi-textural and multi-sensorial experience of eating the dal bati. Being surrounded by my fellow diners at Santosh, locals waiting to catch long distance buses, made the experience so much more real and memorable.Later that evening we went to Chokhi Dhani. This is a sort of Rajasthani Disneyland meets a Suraj Bhansali set affair. It is located outside Jaipur city and consists of a faux village setting recreated for tourists. I had a dal bati there served by waiters with an exaggerated sense of hospitality. Thedal bati seemed a bit different from what I had in the afternoon at Santosh and came with lots of bells and whistles in the form of myriad chutneys and papads on the side here.

A few days later I went to the holy town of Pushkar from Jaipur. I gave the vegetarian restaurants run by expat Israelis and Italians in Pushkar (it’s a meat and booze free town) a miss and went to a thirty year old restaurant called Mamta which was packed with local Indian pilgrims. I tried the dal bati churma there which was very different from the one I had in Santosh in Jaipur. The bati casing in Mamta was crisper and the dal was yellow coloured unlike the dark brown one in Santosh. Nor did it have the number of accompaniments which the more glammed up meal at Chokhi Dhani had.

So I asked my friend, Khushboo Saboo, about why this was so.

Khushboo is a former Jodhpur girl who lives in Mumbai now. She is a market researcher and food enthusiast who is a regular contributor to restaurant review aggregator websites. Though she has travelled across the world trying out new dishes, she loves her dal bati, and gets her mom-in-law to make it for her at least once a month in Mumbai. If the dish wasn’t so heavy, or if her life was not so sedentary, she would have it more often.

Khushboo told me about how the constituents of the bati could be different from house to house. That while wheat flour is used in most houses today, some still use the traditional favourite of bajra (pearl millets). She said that lentils used in the dal  could vary from region to region. In the earlier days one would use dals grown near their villages, moong in some cases, channa in other. Today panch dal ke mel (mix of 5 dals) is what’s popular. There are variations in the churma too with some people even making rose and orange flavoured ones these days.

Khushboo has grown up listening to stories told by her father about how the pilgrims and hunters of Rajasthan would have dal bati churma when on the move in the middle ages. Travelers would carry bucket loads of dal for their journeys. They would carry bajra too. When they would halt at night, they would make balls (baati) with the bajra and smoke these over fires made with wood foraged by the men in the group.

Ghee would be added after the bati was crushed and mixed with dal. This format made it a one dish meal which was convenient to eat while traveling as one didn’t need too many utensils. When the meal was over, some of the remaining bati would be crushed and sugar would be added to it on the same plates, to make churma.

A sweet end to the meal followed by a deep sleep under the stars.

The tradition of dal bati possibly dates to even before the Mughal era. There is a painting in the Umaid Bhawan Palace of Jodhpur of people baking their batis in Maharaja Jaswant Singh’s chita (funeral pyre).

The use of healthy grains like bajra, the protein shots provided by the lentils in the dal and nutritive and detoxifying properties of ghee were all prized for giving a healthy and nourishing meal for those on the move.

This got me thinking about how evolved our traditional Indian food tech was. Today we have Indian food manufacturing giants borrowing foreign technology to make instant noodles in a cup for those on the go and we get excited about that. To me the entire thought behind dal bati churma as a food on the go, and its convenience and health benefits, is pretty fascinating and makes me feel proud about our native ingenuity.

Ad legend Piyush Pandey, who grew up in Rajasthan, wrote in his book Pandeymonium, “All through my career, whenever I am in need for inspiration, I transport myself back to that cold Jaipur winter morning”.

Perhaps there are some lessons to be learned for today’s food and beverage companies in the rich culinary heritage of Rajasthan.

PS: Khushboo told me that dal bati churma is a dish that is usually eaten at home as it is too messy to eat in restaurants.