Actor Shahid Kapoor is ringing in his 37th birthday. Here's a look into his foodie side. 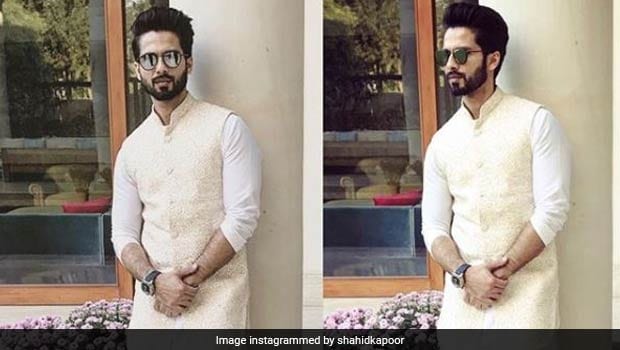 Actor Shahid Kapoor is celebrating his 37th birthday on 25th February 2018. According to media tabloids, unlike last year, the actor's birthday celebration would be a low-key affair this time around. Kapoor along with Mira Rajput and daughter Misha would most probably be heading to Amritsar to ring in the actor's birthday. Shahid, who is riding high on the success of his latest film 'Padmaavat' has already started working on his new film, 'Batti Gul Meter Chaalu' in Dehradun. The actor would be re-uniting with his Haider co-star Shraddha Kapoor for this social drama. The actor received rave reviews for his portrayal of Rajput king Maharawal Ratan Singh in his last release Padmaavat. In addition to his fine acting chops, his perfectly sculpted body also managed to grab quite a few eyeballs.

Fine actor, great dancer and a physique to die for; Shahid has been an inspiration for a million youngsters. Despite being a vegetarian, Shahid manages to have one of the best bodies in showbiz. Did you know, for Padmaavat Shahid went off salt, didn't consume any artificial sugars for 40 days and underwent a complete boot camp regime, under famous trainer Samir Jaura? The regime included functional training, cross fit training and training with ladders, tyres, ropes and sand bags. Canadian Chef Kelvin Cheung was brought on board to look after his diet. He loaded up on greens like broccoli, kale and spinach, along with grains and legumes for most of his protein requirements.

Shahid's discipline towards his diet and fitness is worth an applause, but what is more inspiring is the way he has curbed all his cravings along the way. The actor confessed in a recent interview that Mira is quite a foodie and her penchant for all things good and indulgent is making it hard for the actor to stick to his diet plans. The actor jokingly remarked that there was a time when his fridge would be filled with diet food and now it is stacked with ice creams and desserts.

His social media posts often gives us an insight to his foodie preferences. We have collected few for you.

Shahid's lazy Saturday breakfast of cornflakes and milk, is basically the saga of all our lazy Saturdays, or even Sundays and Mondays and so on..

Remember when the king of hearts made our hearts pop with this cute Valentine's day post?

Seems like little Misha has inherited the sweet tooth from Daddy Shahid already. Look at the proud Dad watching as she gobbles up the cake with both her hands.

The daddy-daughter duo after a "breakfast sugar rush". Can they be more adorable? We doubt

Small little place. Amaze thai food. Must try. #foodcoma#londonnights", he captioned the image as he shared a picture of one of his most favourite restaurants in London.The actor enjoys Indian, Thai and his favourite dish is Rajma Chawal.

Seems like Shahid really loves his breakfast and quiet mornings. That's him enjoying his toast and juice in his spectacular sea-facing Juhu flat.

Shahid is a self-confessed coffee addict. Rarely can one see the actor without his coffee mug and this picture is a proof.

A true coffee lover would ensure that there arises no such point in the day when he/she runs out of their beloved beverage. Setting coffee cubes is just part of the plan and Mr. Kapoor knows that well.